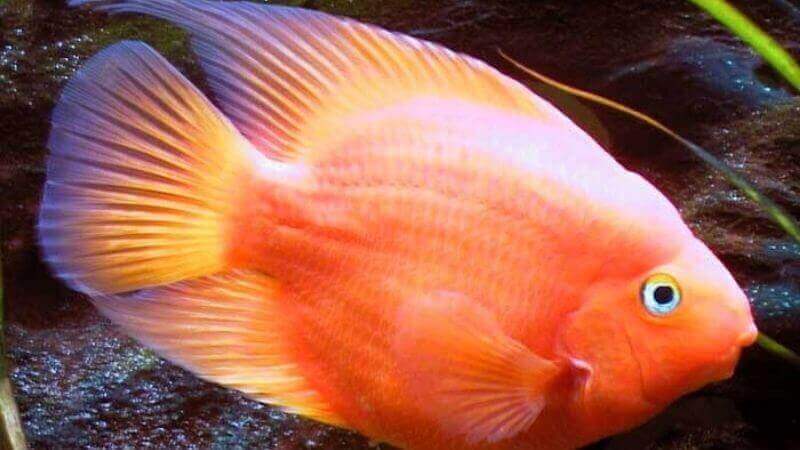 There’s so much controversy surrounding whether it’s ethical to keep blood parrots or not, but let’s keep the moral dilemma aside for now. These artificially bred fish are a mix of midas and redhead cichlids and come with a handful of physical limitations.

For example, they have tiny and rounded mouths that make it difficult to eat. Also, they have somewhat subdued personalities. So, you have to be in the know about choosing suitable tank mates for your blood parrots.

In this blog, I will tell you about the 10 best blood parrot tank mates. So, buckle up!

Here’s our curated list of top companions for your blood parrots:

Sorry if that was too obvious, but yes, the best tank mates for your blood parrots are some more blood parrots! You can stock 5, 10, or 12, depending on the tank’s size.

These fish thrive the best when kept with their own kind. Also, they pack a lot of bright colors and calm personalities. So, you wouldn’t really be missing out on anything.

But most importantly, these fish have small, rounded mouths that compromise their eating ability. And their awkward, egg-shaped bodies make them not-so-great swimmers!

So, if kept with aggressive or very active fish, blood parrots for sure won’t be able to hold their ground. As a result, there’s a good chance these fish will be on the receiving end of a fair bit of bullying.

Thus, keeping blood parrots with their own kind is the safest thing to do.

Now let’s look at some other species that fare well with blood parrots.

Kribensis cichlids are among the most peaceful cichlid species we know. That’s why they’re a top choice for any community aquarium. They will quickly get along with most similar-sized and like-minded species and will cohabitate without a problem.

Given their mellow nature, kribs will not compete with blood parrots for food or give them a hard time. Also, they only grow 3 to 4 inches long – so they don’t really have imposing physical stature.

However, note that kribs are dedicated parents. So, they will get intolerant of presumed intruders when breeding or caring for their young ones.

And don’t forget to add many caves in the tank as kribs are pretty territorial about them.

Severum cichlids are yet another peaceful species to pair with your blood parrots. At worst, they can be semi-aggressive – so they’re good to go with blood parrots.

They’re also moderately sized – reaching 7-8 inches long at max. Thus, they won’t be perceived as a threat by your blood parrots.

Also, interestingly, they are more tolerant towards other species than their own kinds. And that’s good news for your blood parrots.

That being said, you need to ensure ample space to spread out the aggression. The otherwise calm severums can also get a bit agitated during the mating season – but again, that’s the case with almost all cichlid species.

Large, standard gouramis and aggressive and territorial, but not giant gouramis. The latter are generally peaceful species – thus, they shouldn’t be paired with big, aggressive fish.

As the moniker suggests, these fish are indeed tiny – clocking in at just 2-4 inches on average.

Dwarf gouramis are so chill and mellow that they will allow themselves to be bullied to death and still won’t bat an eye. Therefore, they can be perfect neighbors for your subdued blood parrot cichlids.

But dwarf gouramis are somewhat hostile towards Anabantoid species like bettas. Also, males can lash out at each other if kept in a small aquarium. So, don’t go by the size – you’ll still need to invest in a bigger aquarium.

Male dwarf gouramis can also perceive brightly colored males of other species as a threat. But since blood parrots are quite bigger compared to them, this shouldn’t be a problem.

These fish are usually found swimming in the middle and top regions in pairs.

Don’t go by the name. Giant Danio is, well, isn’t too big. These fish grow around 4-6 inches long. However, in captivity, they usually fall towards the shorter side.

Giant danios are inherently peaceful and display an energetic demeanor. They prefer moving in school and fast current.

I’ve seen these fish cohabitate with several species ranging from cichlids and loaches to catfish and tetras in the fishkeeping scene. Thus, they should get along with blood parrots without a problem.

Since giant danios are social beings, they should always be kept in groups. You should at least keep a school of half a dozen at a minimum. If not, they lash out aggression on one another.

As the name gives away, Blue Acaras sport a dazzling shade of blue that perfectly complements the blood parrot’s reddish-orange color! Oh, what a sight it would be!

Luckily for you, you can very well pair blue acaras with blood parrots. These fish don’t grow too big – clocking in at around 5 inches at max.

And they have a peaceful and easy-going nature. Also, they are social and will get along with your blood parrots in a jiffy.

These fish are sometimes mean towards other smaller species. Still, since blood parrots are pretty larger than blue acaras, the chances are minuscule.

Blue acaras also get somewhat territorial and aggressive during the mating season. And they definitely have fierce appetites. So, you need to make sure your slow-eating blood parrots are full each time.

One of blue acara’s eccentric habits is to dig through the substrate and uproot plants. I must say, these fish pack a lot of personalities.

Emperor tetras look as grand as their name. Sleek, iridescent bodies with a dash of dark line, these fish look nothing short of regal. And thankfully, they have a calm and peaceful temperament.

They will get along with your blood parrots, but at the same time, mind their own business. Emperor tetras love swimming in the middle and top parts of the tank, occasionally exploring the bottom.

With these fish, acts of aggression are rare. If it ever occurs, it’s almost always between two males competing for the same female’s attention.

Since they’re tetras, we cannot 100% rule out the chances of fin-nipping at the end of the day. But this should not be a problem in a big aquarium with plenty of space and decorations.

The first bottom-dweller in the list – yoyo loach – grows only about 2.5 inches long. These fish boast a very calm and composed demeanor. And on bad days, they only fight among themselves. So, it’s highly unlikely that they’ll lash out on your poor blood parrots.

Yoyo loaches only venture around the bottom of the tank. So, they won’t get in your blood parrot’s way. But I must admit, they are quite nosey sometimes.

And there’s a common misconception that yoyo loaches are timid. While this may be true at first, they’re super social, active, and welcoming once they get acclimatized.

Given their subdued personality, yoyo loaches often are at the receiving end of bullying and harassment. But blood parrots aren’t known to be mean like that – so your loaches should be safe.

Yoyo loaches best thrive in groups. So, if you’re planning to add some in your tank, you will need to add at least 4-5. It sure will be fun to watch them group up and play.

Cory catfish are among my favorite bottom dwellers for American cichlid tanks. Cory catfish are extremely peace-loving and are highly unlikely to cause feuds or take part in one. They simply keep to themselves.

Thanks to their calm demeanor and composed temperament, they are often the top choice for many community tanks. Their petite size also makes them less frightening than others in the category.

Cory catfish grow anywhere between 1-4 inches, depending on their type. Also, some cory catfish are timider than others.

But don’t confuse their subdued personality for boring. It’s such a joy to watch these active fish going about their day.

They fare the best in mid-sized groups. So, ideally, house around 5 of them. But, don’t worry – they’re as docile as they come.

In general, plecos are mellow and peaceful. And clown plecos are no different. They just love keeping to themselves at the bottom of the aquarium and will seldom show interest in other fish.

And since this behavior is so uncommon in fish, you might even find it unusual at first.

Plecos seldom pick up fights with anyone or harass anyone. So you can be assured that your blood parrots are in good company.

Clown plecos make great additions to your blood parrot tank. They’re peaceful and petite. At max, they clock in around 4 inches.

These fish are shy and like to live away from the lights. So, you can say they are nocturnal creatures. But you can train them to come out at day by offering some food once in a while.

And while clown plecos are non-aggressive, they definitely can get territorial with their own kind. So, you need to ensure there’s plenty of space for everybody.

So, that’s a wrap. Don’t fear to experiment. But don’t go overboard with it. Be super careful if you’re adding aggressive fish like oscars, red devils, convicts, and rainbow cichlids.

And do you know of any other fish that’d make great additions to a blood parrot tank? Let us know!

How To Raise pH In African Cichlid Tank? Can You Use Baking Soda?