10 Types Of Flowerhorns You Need To Know! 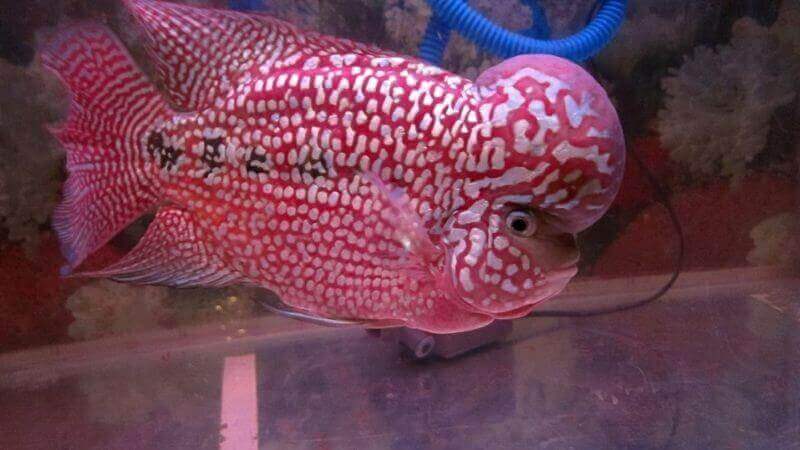 I didn’t believe my eyes when I saw a flowerhorn cichlid for the first time. It was a super red dragon. To me, it looked like an ET straight out of a sci-fi film. Fast forward a few years, I’m a proud owner of a handful of these eccentric fish.

In this blog, I will tell you all about the different types of flowerhorn cichlids. But let’s begin with a quick introduction first.

Unlike blood parrot cichlids, flowerhorns were not developed by accident. They were deliberately and selectively bred in 1993 in Malaysia. So, they’re hybrid Central American cichlids.

One of the original parent species for the first generation of these cichlids was amphilophus trimaculatus. And until now, that’s the species they most closely resemble and act like.

Massively popular in the Asian fishkeeping scene, especially in countries like Thailand, Taiwan, and Malaysia, these fish are also rapidly developing a cult following in the Western countries.

In Taiwan, they are even believed to bring luck.

And naturally, the fish with the biggest hump and best marking sell for hefty prices.

Despite artificial breeding, the breeders have ensured the bloodlines don’t cross in order to produce healthy cichlids. And thanks to this careful breeding technique, these fish are spared from various genetic defects other hybrid fish have.

For instance, flowerhorns are perfectly fertile – an anomaly among hybrid fish.

Now, without further ado, let’s look at all the different types of flowerhorns found commonly in the fishkeeping scene.

Kamfa is undoubtedly one of the most sought-after flowerhorn types we know. Although they’re comparatively challenging to raise, I find many fish-keepers consistently choosing kamfa over other species like Zhen Zhus.

Perhaps, that’s because Kamfas originate from luohans, the first official generation of flowerhorns.

A fish needs to possess certain qualities to qualify as a Kamfa. Five of them are a square body, round mouth, wrapped fins, strong tail, and no underbite or overbite.

The rays in the caudal tail must be strong and upright – preventing the tail from drooping.

The older lines of Kamfas have either orange, white, or yellow eyes. But the new generations are also known to have ruby red eyes.

The eyes are usually used to determine the cichlid’s fertility status.

White eyes often mean the fish is sterile. But, on the other hand, red-eyed Kamfas are deemed the most fertile of the lot.

As the moniker gives away, King Kamfas are the elites of the Kamfa bloodline. As a matter of fact, just about 2 to 10% of the high-quality batch of fry qualify as King Kamfas.

To qualify as the King Kamfa, the fish should have strong markings, excellent pearl coverage, and vivid colors, in addition to the 5 qualities mentioned above.

These fish are best known for their massive nuchal hump, also known as Kok, and their unique patterning. They also have longer tails and bodies than standard Kamfas.

A distinct feature of this strain includes a deep black double flower row along the lateral line and thick white pearling.

They usually have yellow or white sunken eyes, but modern-day King Kamfas have red eyes as well.

First produced in Thailand, King Kamfas are now extensively produced commercially in Vietnam as well. They are undoubtedly the most expensive flowerhorn strain.

Zen Zhu is yet another breed of flowerhorns derived from the Louhan bloodline. They appeared slightly later than Kamfas but rival them quite well in terms of popularity.

A flowerhorn must possess some specific qualities to be a Zhen Zhu. For instance, it should have a long, tapering body – opposed to a Kamfa’s square shape.

Likewise, it should also have a pointy mouth, an overbite or underbite, long fins, and a drooping round tail.

Other flowerhorn types are often bred with Zhen Zhu to produce better pearling (flowerline) for the next generation. However, weak, drooping tails also get carried over often.

Golden Monkey Flowerhorns look nothing like monkeys. Instead, they are super colorful and vibrant – complete with a prominent nuchal hump.

Unlike Kamfa and Zhen Zhu, Golden Monkeys don’t come from a mixed bloodline. Instead, they are the original Louhan-based fish.

They have muscular bodies with thick chins and hardtails at the end.

As juveniles, Golden Monkey looks rather drab with brown and silver linings. But as they grow, they develop stunning red and silver patterns in the upper half of their body.

Also lovingly known as Good Fortune, Golden Monkey cichlids were first bred by Lam Soon and Lam Seah in Malaysia. After producing three successful generations, they were all sold to A-1 Aquarium in 2001.

Given their unparalleled beauty and rarity, these fish come with hefty price tags of more than a thousand dollars.

Golden Base flowerhorns refer to a group of multiple varieties like Faders and Golden Trimacs.

The story behind the name Faders is quite interesting. They’re called so because, as juveniles, they lost almost all of their colors and turn opaque black. But as they grow, the black gradually fades away – leaving behind a more vibrant shade – usually orange or yellow.

A Golden Trimac is a raw cross, where the fish usually ends up looking like a trimac but in yellow and red colors.

Popular Red Texas cichlids are also related to the Golden Base family. They were initially produced by breeding a Green Texas with Mammon or Blood Parrot and crossing the offspring back to the parents, achieving a deep red color.

In Red Texas, the color intensity is the most critical parameter for grading.

They can be rated as:

Orange: The most commonly found color

As the name suggests, Kamfa Malau is a hybrid of a Kafma male and a Malau female. And luckily for us, these fish pack only the best qualities of both parents.

The face, body shape, sunken eyes, and finnage typically resemble that of a Kamfa.

The most distinguishing feature of Kamfa Malau cichlids is their pearlings. The fins have a spectacular-looking frosted pearl look that isn’t found in any other flowerhorn variety.

Similarly, the pearling often cross all the way across the head bump, another specialty only found in these fish.

These fish truly inherit only the best characteristics of both parents.

However, the female Kamfa Malau flowerhorn shows little to no color.

Thai Silk, also known as Titanium flowerhorn, is a relatively new strain. It has a beautiful powder blue body with golden and white undertones.

The eyes are cherry red. And the good news is that red eyes are linked with increased fertility.

The fish’s origin is ambiguous, but a new strain has been recently developed to produce fish with square body shapes, but their eyes can either be white, yellow, or red.

The new strain is a cross between pure Texas, White Tigers, and a Vieja.

Unlike most flowerhorns, Thai Silks aren’t overly aggressive. You can keep them easily in a community tank with other cichlids of similar size and temperament.

These fish are pretty hardy as well. But they will display their best colors when the water parameters are to the T, and they’re fed a nutritious diet.

There are dozens of different flowerhorn breeds, but the most iconic, if not the most expensive, is the Super Red Dragon (just the male, females aren’t as flamboyant).

The fish has a deep red body with a stripe of black markings, or “flowers,” down its side and a massive nuchal hump above the head, on which black flowers sometimes appear.

The eyes are red and hollow, whereas the teeth are tiny and sharp. The lower lip protrudes, and there’s a Churchillian fold beneath the chin.

And due to their stocky body, they swim pretty slow compared to smaller fish.

The IndoMalau variant was created by the Indonesian Luohan Club (ILC). They reportedly bred a Golden Monkey or Malau female with a Zhen Zhu male.

And the second generation was spawned from the Elvis selection and a Golden Monkey female.

IndoMalau flowerhorns have extensive pearling across their body, head, and face.

They also have an extremely fine pattern compared to King Kamfas and Zhen Zhus. As they grow, the pearls on their body become thinner and more intricately woven.

The upper part of the body from the pectoral fins is deep red. The lower half has a golden gradient that intensifies in color towards the tail.

And the body is quite broad and high, resembling the original luohan types.

Likewise, the chin is pronounced, and the head is forward-protruding. Also, the tail is fan-shaped like a Kamfa’s tail.

The Tan King strain was developed by a certain Mr. Tan from Vietnam. He reportedly crossed a Zhen Zhu with a Kamfa.

This fish has pearls and a flower like a Kamfa. However, the fins and body closely match that of a Zhen Zhu.

The eyes are protruding, and the tail’s rounded like a Zhen Zhu’s.

So, that is our roundup of the most popular flowerhorn strains available to us.

Several new flowerhorn strains have been developed via breeding programs across the United States. However, it’s quite challenging for the US to compete with East Asia’s established and flourishing breeding farms.

Let’s look at some of the earliest flowerhorn strains.

There’s a moral dilemma surrounding commercial farming and raising flowerhorns. I’ve had my share of doubts too.

Breeding flowerhorns has been criticized by environmentalists and hobbyists alike for a multitude of reasons.

First, surplus and deformed flowerhorns dumped in the wild in Singapore and Malaysia have successfully survived and disrupted the ecosystems.

Second, breeding for anatomical deformities is downright inhumane and a selfish thing to do. The fish may look unusual and attractive, but they are often marred with many genetic defects.

That being said, flowerhorns have an impressive lifespan. So, I’ll leave the question of ethics to the respective owners!

Rope Fish With Cichlids? These Cichlids Can Live Together With Rope Fish

How Long Do Cichlids Hold Eggs? How To Tell If Eggs Are Fertilized?