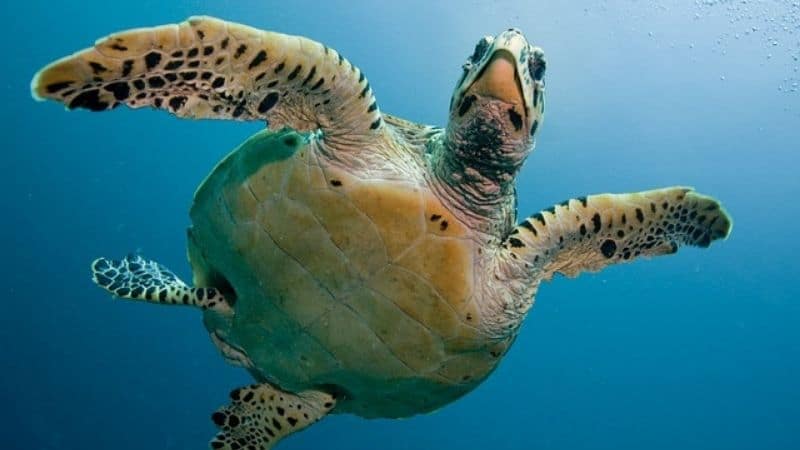 In my opinion, a turtle’s pregnancy and birthing styles are among the most unique ones in the animal kingdom. And even more fascinating is a gravid turtle. Keep reading, and you’ll know exactly why.

How To Identify A Gravid Turtle?

The most effective way of identifying a gravid turtle is feeling the eggs since other visual signs aren’t usually present. However, behavioral changes like long basking hours, appetite change, and constant attempts to escape and dig also could indicate pregnancy in turtles.

Now that you know the brief answer let’s see how you can decode behavioral changes and feel the turtle for eggs correctly.

Visual Signs Of A Gravid Turtle

As reptiles, turtles don’t display obvious and visible signs of pregnancy. In most cases, a change in appetite, basking routine, and energy level are the most prominent signs. A restless turtle trying to escape could also mean your gravid pet is looking for a comfortable nesting place.

Female turtles change their appetite dramatically when they’re pregnant. When preparing to lay eggs, a female turtle will eat quite sparsely. Some even go as far as completely stop eating.

And lack of appetite equals lethargy and fatigue. So, your turtle might sleep and rest more than usual.

However, in the early stages, gravid turtles consume more food than usual. Some start eating voraciously, but this generally doesn’t happen. After all, not all turtle pregnancies are the same.

So, bottom line – if you see your turtle overeating or undereating, you can explore the possibility of a gravid turtle. However, a change in appetite isn’t a sign strong enough to stand alone.

Like appetite, a turtle’s basking routine also evolves when they’re getting ready to lay eggs. Most often, turtles preparing to lay eggs tend to bask for longer hours.

On the other hand, if your gravid turtle is too occupied with finding a suitable nesting spot, she might stop basking or bask too little. And if they don’t bask enough, it can compromise their immune system and metabolism.

In the wild, female turtles will cross entire ocean basins to reach their favorite nesting spot. Due to this innate nature, your captive turtle might also try to escape the tank in a quest to find a suitable and safe nesting spot.

They’ll usually try to dig through the substrate or climb the tank’s wall many times a day. She’ll also make attempts to swim through the walls. So, if you see your turtle restlessly moving around in the tank, there’s a good chance she’s pregnant.

However, none of the signs above are 100% exclusive to pregnancy. Unlike mammals, reptiles show little to no physical signs of gestation.

These behaviors mentioned above could very well be the signals of an underlying health issue, stress, and even boredom.

That’s why, if you think the turtle’s carrying eggs, you need to look for appropriate physical signs by feeling the eggs.

Next, I’ll tell you how to do that gently.

How To Feel A Gravid Turtle For Eggs?

Once the behavioral signs of pregnancy are confirmed, you need to gently feel your gravid turtle for eggs. Since the belly doesn’t enlarge significantly, you’ll have to use this hands-on approach. You can do this by gently touching the plastron, shell’s lower side, and see if you can feel the eggs.

You have to be deeply cautious when feeling the eggs because they’re super fragile and might crack under the slightest pressure. If you’re a first-time turtle owner, I would suggest you seek a vet or an experienced owner’s help.

If you have a male turtle nearby, practicing it on him would give you an idea about the plastron’s anatomy.

Here’s a two-step guide on how to feel gravid turtle for eggs correctly:

Step 1: Calmly Pick Up The Turtle

Carefully pick the turtle by the sides. Make sure that you don’t hold by the plastron as you may crack the eggs. Likewise, don’t pick swiftly from the top since this can startle your pet.

Next, slowly place your turtle in your palm or a soft, flat surface with belly side up.

Once your turtle is carefully laid down, slowly run your index finger across the plastron to see if the eggs move. You don’t have to apply pressure to feel the eggs. If they’re there, the eggs will naturally press up against your finger.

In the early stages of pregnancy, the eggs are even frailer to touch. Don’t push too hard if you don’t feel anything.

Usually, there are a couple of eggs on each side of the stomach.

The downside of this method is that you won’t know if your turtle’s carrying eggs until she’s at least halfway through her pregnancy.

Thus, if you’re uncertain, you can book a vet’s appointment to get your turtle’s radiograph. This will help you know the exact number of eggs and take the necessary steps if there are problematic ones in the bunch.

Here’s a great video that shows how to tell if your turtle is carrying eggs:

Knowing the turtle’s reproductive cycle can help a lot with gauging the pregnancy and clearing any doubt. Have a look!

How Is A Turtle’s Reproductive Cycle?

The reproductive cycle commences in the spring for turtles from temperate regions as the day length and temperature start increasing. However, tropical species only enter the reproduction cycle late in the dry season or early in the rainy season.

I’ll tell you something amazing.

Turtles have evolved to coincide egg-laying with periods suitable for the development and emergence of their newborns. And by suitable period, I mean optimal temperatures and abundance of food.

Although the cycle will vary slightly depending on the latitude they’re from, here’s a general timeline for Red-Eared Sliders:

Can A Female Turtle Lay Eggs Without Male?

Unlike amphibians, turtles don’t absorb eggs that aren’t deposited. Once the eggs are formed, they must expel them. Otherwise, this may lead to serious health issues like internally ruptured or impacted eggs. The symptoms include bulging eyes, hindered locomotion, and appetite loss.

How Long Do Turtle Eggs Take To Hatch?

While we’re on the topic, let’s talk about how the temperature determines the turtle’s sex.

The critical period for sex determination is during the second trimester of the incubation. And interestingly, the critical temperature during this period is usually clocked in around average rather than maximum or minimum.

Conclusion On 3 Signs Of Gravid Turtle

It’s hard to identify a gravid turtle since they don’t go through drastic physical changes. Also, the behavioral changes they display are super subtle.

Make sure to look for signs like change in appetite, basking routine, and energy level. Gravid turtles also try to escape their enclosure to find a fitting place.

You can also feel the turtle’s belly to confirm pregnancy, but you’ll need to extend extreme caution to not break the shells.

Unlike what happens in the wild, a captive turtle needs proper human intervention and help to lay eggs.

You might find this article helpful as it contains in-depth answers to all turtle pregnancy-related questions.