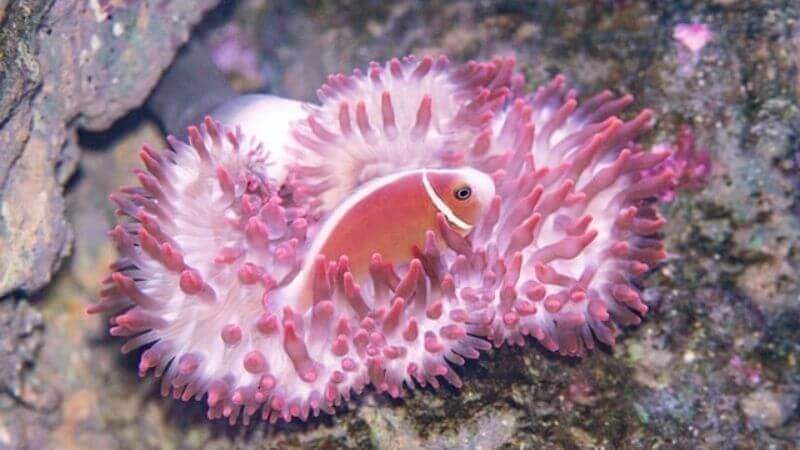 I love Finding Nemo. I think it’s the finest animated film to be ever made. However, there’s one thing that bugs me about this movie. And it’s the fact that it got a whole generation of kids worldwide to believe that clownfish can live in a small bowl like goldfish.

By the way, I hate the practice of keeping goldfish in small bowls sans a heater or a filter.

5-Gallon Clownfish Tank? I have a feeling that you already know the answer. Anyway, let’s carry on.

Is A 5-Gallon Clownfish Tank Possible?

There are one too many caveats of keeping clownfish in a 5-gallon tank. It will make your fish’s life miserable and keep you on your toes all the time.

So, do yourself a favor and get a big tank. It’s really worth it. Trust me on this one.

I don’t think I have to get started on a clownfish’s home in the wild. These fish come from the Indian and Pacific oceans – some of the world’s most pristine and stable environments.

I know it’s not humanly possible to emulate their natural habitat in the tank. But as responsible fish parents, the least we can do is provide them with enough space to forage, explore, and stretch their muscles as much as they want.

And sadly, a 5-gallon tank simply doesn’t have enough space or capacity to house a clownfish happily.

I know these fish are tiny. You could fit more than 1 of them in a 5-gallon tank. But what kind of life would they lead? Poor and impoverished.

Below I will dish out some reasons why clownfish don’t belong in a 5-gallon tank.

Small Tanks Are Too Volatile

Saltwater fish are entirely different from freshwater fish that can even thrive in small water volumes. Clownfish have evolved in seas and oceans. And the parameters in these colossal water bodies seldom change – whether it’s pH, salinity, or temperature.

However, the problem with tanks as small as 5 gallons is that they’re highly volatile. The shifts in parameters happen quickly, abruptly, and frequently.

Even worse, a slight change in one part of the tank can be felt throughout the tank. And your clownfish will definitely not react well to it.

Needless to say, being exposed to volatile water parameters at all times will profusely stress your poor little clownfish.

Small Tanks Get Polluted Too Quickly

Like most saltwater fish, clownfish are notoriously intolerant of ammonia and nitrite levels, which can spike ever so randomly even in established saltwater tanks of tiny volume.

As I said above, small tanks will constantly keep you on your toes.

You need to change the water more frequently, test the parameters more often than usual, and constantly keep an eye out to see if anything goes haywire.

The tank’s ammonia levels should always be maintained at 0 ppm. And frankly, it’s quite a difficult feat to achieve in a small 5-gallon tank.

If the ammonia levels spike, your clownfish will show signs like labored breathing, reddened gills, and lethargy. Before you know it, their bodily functions will fail, and death will knock on their doors.

Likewise, nitrite levels should also ideally be kept at 0 ppm. If it increases by any chance, it will wreck your little Nemo’s immune system and make it susceptible to secondary conditions like liver damage, ich, and fin rot.

We use and recommend using the Saltwater Master Kit from API to monitor the water parameters weekly. Here’s a link if you’re interested.

Your Clownfish Will Fight For Territory

Finding Nemo got us all thinking that clownfish are naive and gullible. Even their name suggests so. But do you know these fish are pretty aggressive and pack a lot of personality in real life?

Clownfish are known to be extremely territorial. They don’t mind fighting to the death to defend their beloved anemones.

You will often see your clownfish swim through rings or down runways for an opportunity to strike the rival with their mouth, head, or tail.

Naturally, the alpha clownfish will occupy most of the tank, whereas the subdued males will be forced to cower in the corner and lead impoverished lives.

It’s a common belief that fish grow to the size of their tanks. I don’t know how true it is, but I definitely know that small tanks can stunt their growth. And they do so in one too many ways.

First, small tanks get polluted more quickly, as you already know from the pointer above. And swimming in a dirty environment will naturally make your clownfish vulnerable to many ailments.

A sick fish will not grow to its full-size potential, right?

Second, small tanks mean your clownfish will not get enough exercise. Clownfish are fast swimmers that love to dart across the tank a lot.

If your fish doesn’t get to swim as much as it wants or needs to, it’s definitely going to inhibit their growth rate.

Lastly, fish are known to release certain pheromones into the water that inhibit the growth of other fish in the tank. Now, this wouldn’t really be that big of a problem in an ocean where the hormones would get swept with one swoosh.

But this is a matter of concern in closed systems like aquariums – that too a 5-gallon tank, don’t you think?

Your Clownfish Will Become Stressed

All the factors I listed above hold the capacity to collectively or single-handedly stress out your clownfish. And research has shown that when stressed, a fish’s body cannot produce white blood cells at the required rate.

Consequently, this directly impacts the fish’s immune system and makes it prone to several health conditions.

As evident from the points above, a small tank ruins a clownfish’s life in numerous ways. For example, it makes them susceptible to disease, stresses them, stunts them, and so on and so forth.

Therefore, fish confined in small tanks often don’t get to live their lives to the fullest or longest.

Clownfish enjoy a pretty decent lifespan. While their average lifespan in captivity is 10 years, many have claimed that their clownfish made it to the 30s.

So, you see, with the right care, they can outlive most of your other pets. But a small tank may get in the way.

I hope I got my point across! No matter how small the fish is, most marine species have a hard time surviving in small volumes of water.

And I’m sure you don’t want to keep your fish in less optimal water conditions.

While researching for this topic, I came across a few opinions shared on different forums. I then decided to pool them all together so you can have a look at what fellow hobbyists have to say about keeping clownfish in a 5-gallon tank.

Care to go through them? Keep reading!

How Often To Feed Clownfish? The Risks Of Underfeeding

Disclaimer: All the opinions expressed below purely belong to the respective authors!

“Honestly, I would avoid it as they can grow pretty quickly. But if you want a fish, go with goby. You can even get a nano fish or a skunk cleaner shrimp.”

“I think for a year, a clownfish can stay in a 5-gallon tank. Clowns usually stick to just 1 area.”

“Meh, I had 2 clownfish in a 10-gallon tank. As adults, they looked pretty cramped to me once the corals started growing in.”

“I’d only recommend keeping clownfish in 5-gallon tanks if 1) you’re planning to do frequent water changes, 2) plan on upgrading eventually, 3) get your clownfish at a very small size.”

“Personally, I wouldn’t keep clowns in anything less than a 15-gallon tank. It’s not a good idea.”

“Maybe you can do goby/pistol shrimp in a 5-gallon tank. You can get gobies that stay very small.”

“I wouldn’t keep any saltwater fish in a 5-gallon tank. Too small and too difficult to keep the water conditions right.”

It seems the answer is a big NO from our fellow hobbyists.

Before we end this article, I will tackle some of the most frequently asked questions on clownfish. Stay tuned!

Can Clownfish Live In A 10-Gallon Tank?

Yes, a clownfish can live in a 10-gallon tank, but it would lead a poor life – as poor as a church mouse. So you better get your Nemo a bigger tank.

The minimum recommended tank size for clownfish would be 20 gallons. Anything smaller than this would be hard to maintain and also look crammed.

If possible, go for a bigger tank.

What Would A 5-Gallon Saltwater Tank Setup Look Like?

The accepted rule of thumb in the marine fishkeeping hobby is “one inch of fish (measured from nose to the tail’s base) per 5 gallons”.

Therefore, technically, you can only add 1 one-inch fish in a 5-gallon tank. And I’m sure that’s not what you’re looking forward to. So get a bigger tank, my friend!

You can add a goby and a pistol shrimp in a 5-gallon tank. But you will need to find gobies that stay very small.

Cutting to the chase, a 5-gallon clownfish tank isn’t possible. The minimum recommended tank size for clownfish is 20 gallons.

Although small, the fish in question today are extremely active and territorial. Therefore a 5-gallon tank would not be able to accommodate their needs.

It’s not an easy feat at all.