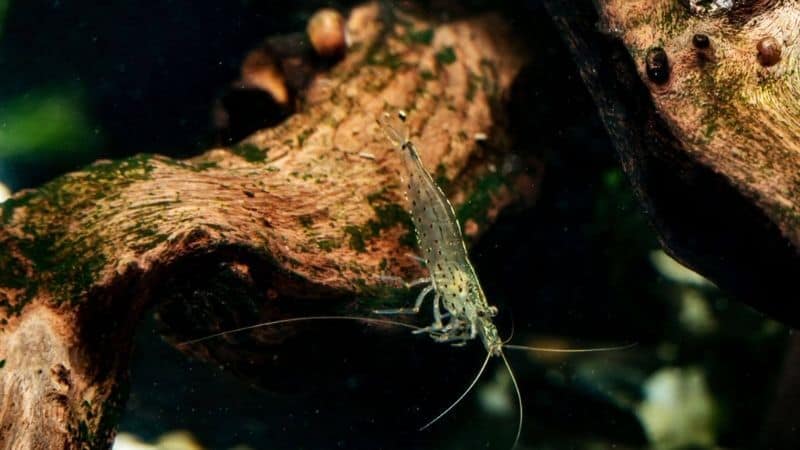 Many Shrimp keepers report that their Amano shrimps hide during the day and only come out during the night. Considering that you rarely get to show your relentless Amano shrimp to your friends can sometimes be disappointing. So, anyone who is a beginner into keeping Amano shrimp in their tank will ask himself or herself the same question: Are Amano Shrimp Nocturnal?

So, What do Amano Shrimp Do During Daytime?

Amano Shrimp during the day will hide among the plants and will relentlessly eat the algae present in your tank. If there aren’t any algae left, they will eat the decayed plants without harming the healthy ones. They are shy creatures and will often hide and graze with whatever is left in the substrate.

Amano shrimp has to protect itself from various predators in the wild, so they prefer not to come out during the day. So a captive Amano shrimp will display the same behavior when you place them with other tank mates. You need to be careful with whom your Amano shrimp shares the tank.

Amano Shrimp are great at camouflaging with their surroundings. Their translucent body helps them to pass by unnoticed whenever there’s a threat around.

If you have kept a troupe of Amano’s in the tank, then you will find them lurking and feeding on algae in a group of 3 or 4.

An adult Amano can grow up to 2 inches, the size of your thumb. Often, the adult Amano will dare to venture out during the day while the smaller ones will hide in the tank’s nooks and corners. These smaller Amano will show minimal movement.

Generally, you will get a sight of your Amano only if they want you to see them. They hide because they aren’t feeling comfortable with their surroundings.

If you have a tank housing only shrimps, then you will find them coming out of their hiding places during the day.

Then, Why Do Amano Shrimps Only Come Out At Night?

There are several reasons your Amano shrimps only come out during night time. Usually, it is because of their innate instinct, telling them it is the time when they are most safe from their predators.

Here, I have listed the reasons Amanos only come out at night.

Fish Sleeps During The Night.

Most aquarists keep Amano in a fish tank with their pet fishes. The reason behind keeping Amano with fishes is that the aquarists want to keep their tank clean and algae free. And Amano is excellent at cleaning tanks.

However, many are shy and are easily threatened when there’s a fish in their habitat. Though Amanos only dwell in the substrate, they are highly alert whenever fish is around.

Most fish are diurnal, i.e., they feed and swim during the day and sleep at night. And this is the best time for Amano to feed on algae. They don’t feel threatened at this time of the night and will relentlessly graze right till the morning.

Abundance Of Food Also Cause This.

If you are feeding your Amanos more than necessary, they will have abundant food and won’t venture out during the day. The reason Amanos come out is when they require food and have to graze.

But if food is already being delivered to their nooks and corners and they won’t need to come out and scavenge.

So, next time you need to keep notice of how much you are feeding to your Amano. The way you can check how hungry your Amanos are by putting some algae pellets in the tank and see how your Amano reacts. If they are hungry, then they will come out of their hide and will devour quickly.

Too Much Of Lights

Have you been putting excessive lights in your aquarium? This could also be the reason why your Amanos are coming out only during the night.

Beginner aquarists often make the mistake of putting on too many lights. This will make Amanos hide, as this makes them feel vulnerable. So, try to keep suitable lights on your tank.

How To Make Your Amano Shrimp Come Out Of Their Hiding?

If your Amanos aren’t coming out of their hiding, you need to assure them it is okay to come out. And this is achievable only if you know how Amano Shrimps react to certain conditions.

Make An Amano Shrimp Tank Only.

(If you are a fish lover who is keeping Amano only for the sake of making your tank algae free, then feel free to skip this.)

Most aquarists keep shrimp for cleaning algae in their fish tank. They keep Amano with other fishes, and as I mentioned earlier, therefore Amanos feel threatened and do not come out of their hiding.

While your tank gets cleaner and algae-free but you will get minimum visibility of your Amano shrimps. So what you can do is make a tank only for Amano Shrimps. You will love them and won’t remember the passing of time while gazing at your Amanos.

Amanos live in troupes and will only feel safer when they and their favorite algae are all there is in a tank. No fishes, no turtles, no nothing. And when they feel that there’s no threat of predator in the tank, they will come out of their hiding no matter it’s day or night.

I know it sounds a bit harsh, but the reason behind your shrimp not coming out from their hiding place could be due to an abundance of food. From now on, do not overfeed them. Let them get out of their hiding and forage around the tank. Once they feel the scarcity of food, then they will venture into other areas of the tank.

Amano shrimp, as you know by now, are relentless algae feeders. They are excellent at what they do and clean your tank 24/7. Them not sleeping during day time rules out them being nocturnal.

If your Amano shrimp is not coming out of their hiding, it could be due to other fishes’ presence, which they see as a threat. If you really want your shrimp to come out of their hiding and show transparency with their activities (no pun intended), I would advise you to make a shrimp only tank.