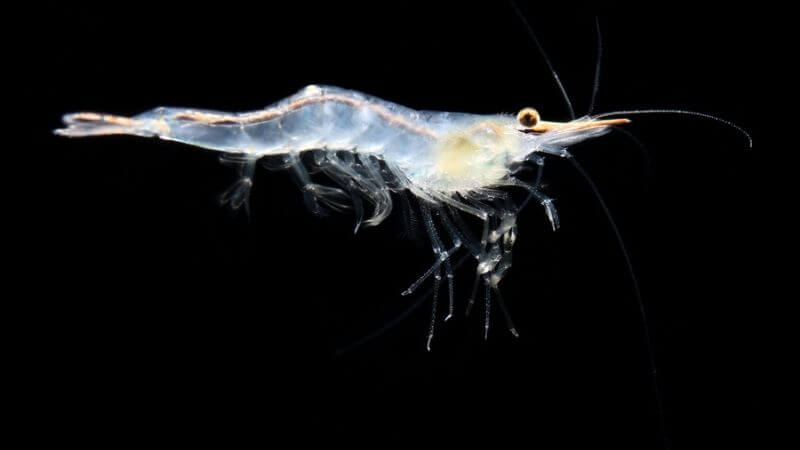 Ghost shrimps got their infamous name because of their ghostly appearance. You can see pretty much everything that’s going inside their bodies—cool, right? So, are they also true to their names when it comes to sleeping habits? Let’s find out are ghost shrimp are nocturnal or not.

By nature, ghost shrimps have evolved to be nocturnal creatures. It’s because they live in high predation areas and have to be careful at night. They have more or less the same pattern in a fish tank. But they’re also often found to be active during the daytime.

So, in pet ghost shrimps, the nocturnal sleeping pattern can be present or missing. If they’re feeling safe, ghost shrimps don’t mind staying awake and foraging during the daytime.

Now that the mystery of ghost shrimp being nocturnal is clear, let’s look at the underlying reasons behind it.

Will Ghost Shrimp Eat Fish? Are They Scavengers of Predators?

Why Are Ghost Shrimps Most Active At Night?

Most scavengers are active during nighttime, and ghost shrimps are no different. They’re active at night because they need constant reassurance of safety. And as they sit at the bottom of the food chain, the chance of being consumed is exceptionally high. Thus, they have evolved to remain active at night.

However, if they’re living in a shrimp-only tank or a community tank that doesn’t pose any threat to their lives, it’s not unusual for ghost shrimps to adopt a diurnal lifestyle. In fact, this is more common than expected.

How Do Ghost Shrimps Sleep?

As bottom feeders, ghost shrimps spend most of their time at the base scrounging for food, hiding, and molting. Thus, naturally, they sleep on the substrate. When sleeping, they’ll rest their body on a rock or driftwood usually.

Also, ghost shrimps stay motionless when sleeping. And as they don’t have eyelids, it’s tricky to know if they’re sleeping or just resting.

Why is My Ghost Shrimp Sleeping So Much?

Whether your ghost shrimp is nocturnal or has adopted a diurnal lifestyle, they’re not known to sleep much. So, if you find your ghost shrimp slumbering more than usual, it’s most likely that the shrimp is suffering from a medical condition and is not feeling well.

The most common diseases in ghost shrimps are fungal and bacterial infections. They can also suffer from illnesses like muscular necrosis and horsehair worms. These diseases are bound to mess with a ghost shrimp’s immunity and exhaust all their energy—causing the ghost shrimp to sleep a lot.

How to Make a Ghost Shrimp Active?

It’s best that you leave a ghost shrimp to its own devices unless medical intervention is needed. But if you want to make your ghost shrimp more active, you can optimize the water parameters and alter the feeding routine.

For ghost shrimps, water isn’t just crucial to their survival but development as well. Water plays an essential role in molting, which directly impacts their health and wellbeing. Thus, when water parameters are optimized, they’ll naturally become more active.

Ghost shrimps thrive the best when water temperature clocks in somewhere between 70-80 degrees Fahrenheit. Likewise, the pH level should fall between 8 and 10.

And since ghost shrimps need a good amount of calcium intake, it’s imperative to maintain the tank’s GH level.

To sum it up, here’s what ideal water parameters look like for ghost shrimps.

You also need to make sure the water is clean at all times and doesn’t contain harmful gases. Gasses like ammonia and nitrite are very much detrimental to a ghost shrimp’s life.

Thus, ensure a sound filtration system that gets not only rid of the solid gunk but also purifies the water. You will also need to install an air pump because ghost shrimps need well-oxygenated water to facilitate their molting process.

As scavengers, ghost shrimps are on a constant hunt for food. Thus, if you alter the eating options and patterns, it can significantly affect their sleep routine. Make sure never to give too much food once. That’ll make them lazy and inactive.

Instead, you can feed them sparsely and let them find food from the tank. However, make sure you don’t starve them.

Conclusion on Are Ghost Shrimp Nocturnal?

The straightforward answer to are ghost shrimps nocturnal is yes. However, there’s much more to it than just a simple yes/no answer.

In the wild, ghost shrimps are usually nocturnal because they need to keep themselves safe from predators. During the daytime, they’ll usually hide to protect themselves better.

This same behavior can be witnessed in commercially produced ghost shrimps as well.

But within the tank’s four walls, if a ghost shrimp perceives that there’s no threat, it can adopt a diurnal lifestyle.

Last, if you see your shrimp is exhibiting unusual sleeping patterns, this could be because of an underlying medical reason. Pay proper attention because it carries the potential of wiping down an entire ghost shrimp colony if it’s infectious.