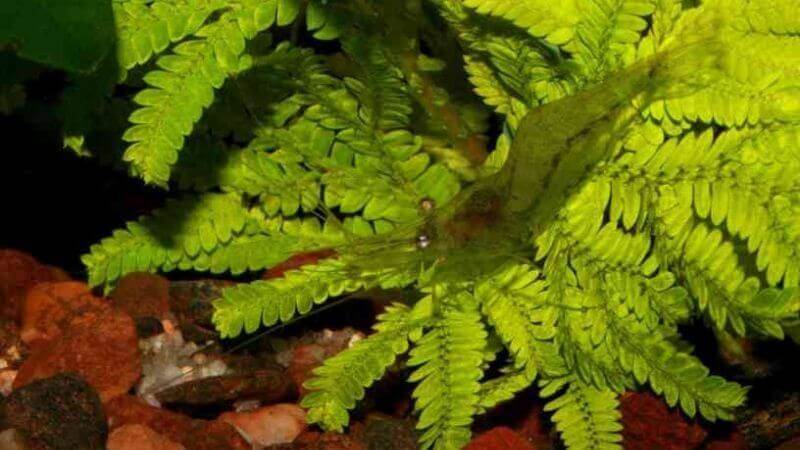 Ghost shrimps are known for their ghostly appearance. With sleek, transparent bodies, these bottom dwellers indeed look like cute, tiny Caspers flying swiftly in the tank.

Unassuming and shy, do you know these tank cleaners also have a reputation for being hostile? So, are ghost shrimps aggressive?

Keep reading as we dissect their personality and recount horrific stories that show their monstrous side!

Ghost shrimps aren’t inherently an aggressive shrimp species. However, they are known to be aggressive if there is food scarcity in the tank, or the habitat conditions aren’t met. Often, hostile imposters like whisker shrimp, who are sold as ghost shrimps, are the culprits that give ghost shrimps a bad name.

It’s widely believed that Thai ghost shrimps are a far more aggressive breed than those native to the southeastern United States.

Are Ghost Shrimps Aggressive Towards Fish?

Naturally, ghost shrimps fall in the bottom tier than fish in the food cycle. So, they’re seldom aggressive towards fish. However, suppose the fish in question is significantly smaller than the shrimp. In that case, there’s a chance it could be bullied and even eaten.

Across several forums, I came across stories of ghost shrimp devouring fish like tetra and guppy. However, this happens rarely.

Ghost shrimps usually only go for the fish if it’s already dead or severely ill. They actually prefer scavenging on the dead ones.

What to Feed Baby Ghost Shrimp?

Ghost shrimps usually target smaller shrimps that have just molted and have a hard time being mobile. If your ghost shrimp has consumed a cherry shrimp, you can notice its belly gets pink or even red.

That being said, I know several aquarists that have successfully raised ghost shrimps and cherry shrimps together. Just make sure the parameters are to a tee for both species.

We will discuss that below but first, let’s talk about imposters often sold as ghost shrimps. This occurs because ghost shrimps are sold as a random collection of different species.

The primary difference between ghost shrimp and whisker shrimp is their size. The former can grow up to 1.5 inches, while the latter will easily get to 2 inches. While both have transparent bodies, whisker shrimps have noticeably longer claws.

If you look closely, you can also see tiny orange bands on the base of the front legs in ghost shrimps, which are missing in the whisker shrimp.

In terms of personality, the main difference is that ghost shrimps are docile creatures until and unless they’re pressed, but whisker shrimps have a natural predatory instinct. They are often on the lookout for a tasty snack in the tank.

While researching for this article, I lost count of instances where aquarists shared that their ghost shrimp ate a fish, a snail, or a fellow shrimp. But it turns out that it’s almost always the case where they confuse a whisker shrimp for a ghost shrimp.

Since it’s established that the answer to ‘are ghost shrimps aggressive’ is relative to hunger and tank conditions, let’s see what’s best for your shrimps to keep their stress under check.

What To Feed Ghost Shrimps?

You can give your ghost shrimp algae wafers, fish flakes, blood worms, plants, daphnia, insects, larvae, and so on. Since shrimps are naturally high in oil and fat, they have a better threshold for digesting fatty food.

A high-protein diet is vital in the early life stages. Also, a calcium-rich diet is essential to facilitate healthy shell growth and molting. It’s wise to give calcium supplements since casualties during molting are quite commonplace.

People use all kinds of options like eggshells to fortify the water with calcium, but in my experience, it makes the water quite cloudy.

I use cuttlebones that dissolve very slowly and don’t mess up with the tank’s pH level.

We often overlook the dietary need of a ghost shrimp since it’s easy to assume the tank’s waste can suffice its diet. But sometimes, that’s not the case. Like with any other species, hunger can lead to aggression in ghost shrimps.

If you have a perfectly working filter, there’s a good chance that the build-up and algae will be washed away before your ghost shrimp has an opportunity to feed on. So, it’s best to always consciously give food to your modest tank cleaners!

Who Are The Best Ghost Shrimp Tank Mates?

You can pair your goldfish with other shrimp species like Amanos. Small tetras, dwarf suckermouths, and small rasboras are great fishes to add to your shrimp tank. Snails are also known to peacefully cohabitate with ghost shrimps.

You can add tannins since they lend antibacterial properties to your ghost shrimps, who are more vulnerable when molting. Also, ghost shrimps are less tolerant to copper. So, if you’re using tap water, make sure to run it for a few minutes first. This way, the water will have far less corrosion properties.

It’s always best to use aquarium conditioners that eliminate copper and other heavy contaminants.

With fish, you don’t have to worry much about nitrates since they’re a bit less toxic than ammonia. However, with ghost shrimps, or any other shrimps, you need to conduct weekly water tests to ensure the nitrate levels are below 20 ppm.

Don’t add any decoration or plant with rough edges or protrusions. You can instead opt for rounded rocks and driftwoods. As for plants, your best bet would be fast-growing options to lock in much nitrate as soon as possible.

I use plants like java moss and peacock moss to make tiny caves for ghost shrimps. These curious creatures love to play hide and peek around.

Here’s a quick rundown of all the essential bits.

No, ghost shrimps aren’t aggressive until and unless they’re pressed or are forced. They are naturally docile and unassuming creatures that love to lurk around at the bottom.

However, if there’s not enough food for them or the tank’s conditions aren’t suitable, the predatory instinct will kick in.

So make sure you couple your ghost shrimps with suitable tank mates that are neither hostile nor territorial.

Will Ghost Shrimp Eat Fish? Are They Scavengers Or Predators?

Will Ghost Shrimp Eat Fry? Are They Cannibals?