Are Glofish Aggressive? Why Are They Fighting? 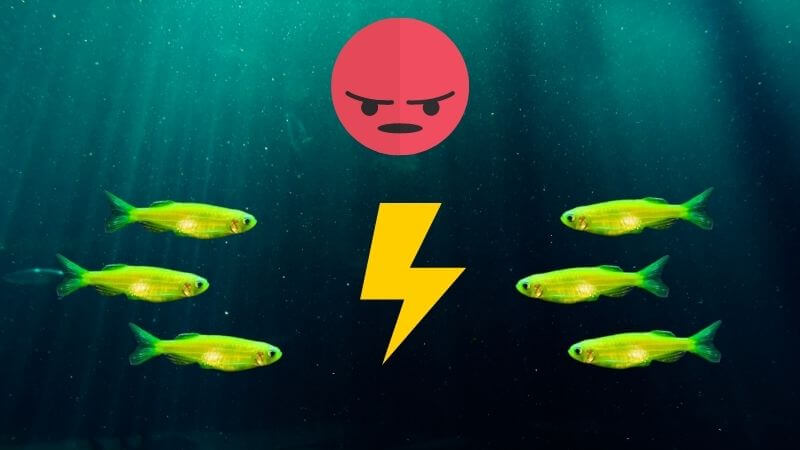 Glofish were first created to detect environmental pollution. Fast forward two decades later, they account for 10% of all aquarium fish sales. As of now, there are 5 glofish species. The brains behind them strategically chose the hardiest fish available to create glofish. So, they’re all relatively easy to keep. But what about their personalities? Are glofish aggressive?

The answer to these questions differs from species to species. While some are relatively docile and social, others ideally need to be housed alone due to their excessive aggression.

So, let’s find out who the saints and the sinners are.

Glofish tetras, danios, and barbs are schooling/shoaling fish. While they are sociable most of the time, they become aggressive when kept in numbers less than 5-6. Glofish bettas, especially males, are extremely territorial and aggressive. However, the ‘most aggressive glofish’ titleholders are glofish sharks.

Except for the bright, fluorescent disposition, all glofish species have retained the personalities and temperament of their original species.

So, if you ever have questions about your glofish’s behavioral issues, you can look into their original species for a solution.

Now, I’ll answer the query in detail below!

Glofish tetras are made from black skirt tetras. They are schooling fish from the Characidae family. Like their original counterparts, glofish tetras are calm and peaceful – making them suitable for both advanced and beginner hobbyists.

However, tetras can be aggressive when kept in unfavorable situations. They will also get cranky when kept in smaller groups. Then, they will resort to what they do the best – nip fins. Yes, glofish tetras are notorious fin-nippers.

Glofish danios were the first-ever glofish, the OGs. These are active and curious fish that shoal in larger groups. So, like most shoaling fish, they get stressed and agitated when kept in small groups.

The bare minimum number for the shoaling group would be 6. But beginners often make the mistake of keeping only a couple of them in nano tanks. This naturally stresses them, and they turn to mean and violent antics like fin nipping and chasing.

So once again, you’d be better off not keeping them together with long-finned fish like bettas. Instead, the best tankmates for glofish danios would be flying barbs, celestial pearl danios, corydoras, neon tetras, ember tetras, swordtails, and honey gouramis.

Why Is My Glofish Swimming Sideways? 3 Reasons Why!

What Temperature Do Glofish Need? Do They Need A Heater?

Glofish barbs are created by genetically modifying tiger barbs. And as the moniker suggests, these fish have a somewhat sassy personality. So you can describe them as ‘semi-aggressive’ fish.

They are known to push around smaller, vulnerable fish. They also nip at the fins of slow-moving tankmates. However, these nasty behaviors can be kept under control for the most part if they are kept in big groups.

Yes, you guessed that right! Glofish barbs are schooling fish as well. You should aim to keep at least 6 of them together. This way, they will keep to themselves. They have an interesting social hierarchy and fight for pecking order within the group.

Tiger barbs do best when kept with their own kind, like rosy barbs, tinfoil barbs, and cherry barbs. Clown loaches, pictus catfish, and most types of plecos also make good tankmates.

I’m not going to sugarcoat this one. Yes, glofish bettas are aggressive. Much like their original species, they too have an anger problem and are highly possessive of their territory. But I wouldn’t blame them. After all, they were bred to fight matches akin to cockfighting.

Bettas – especially males – are known to even fight their own reflection. So, the chances of keeping more than 1 male betta in a tank are incredibly slim. They will literally fight to the death.

While some hobbyists keep them together in big tanks with plenty of hiding spaces, others take the help of dividers to separate their territory.

And bettas just don’t have problems with their own kind. Any fish with long, prominent fins are perceived as threats. So, you cannot keep them together with fish like angelfish, fancy guppies, and goldfish.

If you think glofish bettas are aggressive, you should meet glofish sharks. They make bettas look like timid little fish. Glofish sharks were originally made from rainbow sharks. And we all too well know how rainbow sharks are.

As juveniles, rainbow sharks are timid and will hide around a lot. But once they get mature, their aggression and dominance will go over the roof.

For starters, they are extremely territorial fish that don’t like to share their area with anyone. That’s why it’s recommended to allocate at least 50 gallons for each glofish shark. Otherwise, they will start brawling and biting any creature encroaching on their territory.

And experienced hobbyists suggest that you should never keep two glofish sharks in the same tank. Sooner or later, you will end up with a dead fish. So, if you insist on keeping more than one fish, you should at least keep 5 of them together to spread out the aggression.

Since glofish sharks dwell mainly around the bottom area, you should never house them together with bottom dwellers. Fish like gouramis, tetras, danios, and rasboras can make good tank mates. But remember, things can go south pretty quickly.

Why Are My Glofish Aggressive?

For some glofish species (bettas, barbs, and sharks), aggression is their second nature. They’ve evolved to have a mean temperament. However, it’s an acquired behavior for others (tetras and danios). Aggression in fish can result from a territorial dispute, defense mechanism, lack of resources, and mating competition.

Let’s have a look at some of these reasons in detail below.

3 out of 5 glofish species are schooling/shoaling fish. They have evolved to swim together over thousands of years to swim, forage and protect better. So, depriving glofish barbs, tetras, or danios from their innate need to swim/shoal makes them stressed and fearful.

And naturally, as a defense mechanism, they begin to act aggressive and resort to mean antics like pushing, chasing, and nipping fins.

These fish swim together in groups of hundreds and thousands in the wild. So you should aim to keep at least 6 of them together in the tank. Unfortunately, many beginner hobbyists make the honest mistake of keeping just 2 or 3 of them in a tank. And they definitely can’t swim or shoal in these numbers.

The intensity may differ, but all glofish species are territorial. With fish like danios and tetras, the worst that can happen is nipped fins and minor injuries. With fish like bettas and sharks, it’s a bloodbath.

Big or small, all fish are territorial. So, it’s never a good idea to overstock your tank. It will make them stressed and consequently violent. This is especially true for glofish sharks and bettas. If you need to keep any more than 1 of these fish, installing tank dividers would be the safest bet.

The guarding fish will almost always strike competing fish. Territorial aggression can be due to the pressure of mating, producing offspring, guarding intruders, and so on.

Therefore, in addition to ensuring a generous amount of space for everyone, you should also place the decorations strategically to create distinct territories for your fish to claim. And don’t forget to include as many hiding places as possible!

Fighting over resources is ubiquitous in the animal kingdom. Even humans do it. And your glofish are no exceptions. If there are not enough resources in the tank, the fish will naturally fight.

Most aquarium fish have a complex social hierarchy and pecking order in place. The dominant fish may get to fill its tummy with whatever little food is available, but the weaker ones will be left to starve. And sooner or later, they will revolt – resulting in grave consequences.

Experienced hobbyists suggest giving 3-4 small meals instead of giving 1 or 2 big meals per day. This reportedly helps with aggression over resources. And while feeding, always make sure to disperse the food across all corners of the tank, so all fish don’t have to swim to the same place to eat.

No matter how advanced or primitive an organism is, the lengths it will go to continue its lineage are quite impressive. The same can be said about glofish. Especially towards the mating season, the males will be super competitive in their efforts to woo potential females.

None of the glofish species are known to mate for life. Every breeding season, the male will try to fertilize the eggs of as many females as possible. So naturally, the competition is always high.

The males will get even more territorial than they already are when breeding. For example, if male figures out that a female swims around a specific part of the tank more frequently, the male will claim and defend that particular territory fiercely.

Males are even known to fight to the death over females. Therefore, it’s always best to keep more females than males. But for species like glofish sharks and bettas, I’d advise not keeping more than one male in a tank at a time.

Why Are My Glofish Attacking Each Other?

Glofish attack each other for the same reasons other fish do. 3 of the 5 glofish species – danios, tetras, and barbs – are schooling fish. If you only keep 2-3 of them together, they will become stressed and turn on each other.

Other probable reasons could be fighting over territory, resources, and mates.

Are My Glofish Fighting Or Playing?

If your glofish are playing, they will take turns chasing each other. They will also swim towards each other and interact in their own little ways.

However, if your glofish are fighting, the threatened fish will likely cower in a corner instead of diving into the situation head-on.

Yes, glofish tetras are fin nippers. Therefore, it’s not the best idea to keep them alongside long-finned fish like bettas, angelfish, and fancy goldfish.

They resort to nipping fins if the school size is too small, there’s not enough resources or space, or they’re getting ready to mate.

All 5 species of glofish can act aggressively under the wrong circumstances. Glofish danios, barbs, and tetras are schooling fish that should at least be kept in a group of 5-6. Otherwise, they will become mean and nip each other’s fins.

Glofish bettas, especially males, are just as aggressive as your regular bettas. So, it’s advised to keep only one male per tank.

However, the most aggressive ones in the glofish family are glofish sharks. They’re notorious for their rage. They at least need 55 gallons each to live comfortably.

Even then, it’s super risky to keep more than one glofish shark in the same tank.