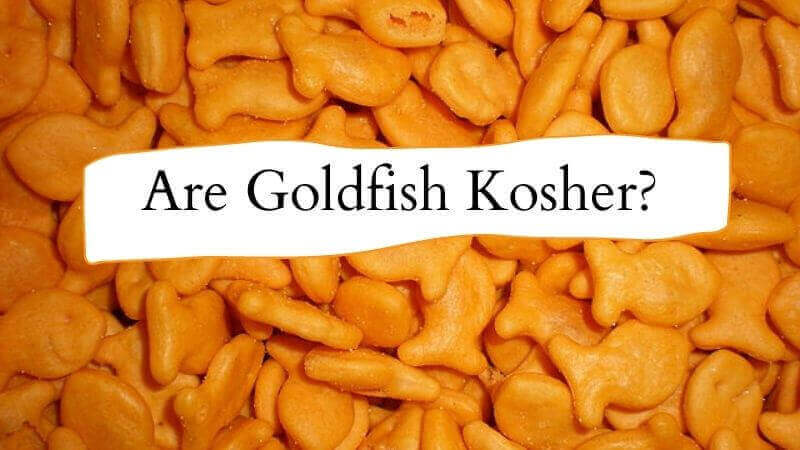 Back in my home country in Nepal, I’d never met a Jew. It took me 20 trips around the sun and emigration to an entirely different continent to know and befriend them. And what a pleasant experience it has been!

So naturally, I only learned about Kosher food and its significance a few years back. In an increasingly assimilated world (which I love btw), with lines of division blurring left and right, sometimes, it’s hard to stay true to one’s roots and beliefs.

Therefore, in this blog, we will take a slight detour and talk about Pepperidge Farm’s Goldfish Crackers instead of our fish goldfish.

Are Goldfish halal? So I put on my thinking cap to scour through the internet.

And guess what? I found two contradicting answers. Yikes! I’ll let you be the judge.

The Goldfish crackers do not contain any ‘non-Kosher’ ingredients. However, the product is still not certified Kosher to date. This is what Aaron Breceda, an avid Jew, has to say on the matter.

He points out that hard cheeses (like cheddar cheese) are made with milk and animal rennet, a hardened stomach lining of an animal. In medieval times, people would use the rennet of whatever animal that was convenient and available.

And that’s why the Rabbis passed a decree that one should not buy cheese unless it was made under the supervision of a learned Jew.

That’s because one cannot simply look at the final product – cheese in this case – and tell what animal rennet was used in its making.

And that decree is still in effect today. So for Goldfish crackers to be Kosher, they would still need to be made or at least be supervised by a Jew, even if the ingredients used come from ‘acceptable’ animals.

This tweet from Pepperidge Farm Cares states that their goldfish crackers aren’t made with animal rennet or enzymes.

The ingredient list for the original crackers doesn’t include cheese or enzymes.

However, the Princess edition and Goldfish Cheddar both have enzymes listed as ingredients. So, I don’t know how credible this tweet is!

So, my verdict here would be to skip Goldfish crackers even if they contain pure ingredients. In my opinion, the lack of Jewish supervision makes them Rabbinically unacceptable to eat.

Several mainstream manufacturers are reformulating their products to meet Kosher requirements. As a matter of fact, the low cost of kosher certification has encouraged these companies.

It’s time Pepperidge Farms do something about it too.

And by the way, if you were wondering about fish goldfish, yes they’re kosher. A water-dwelling creature must have scales and fins to be kosher.

I tried my best to find new information on the matter but with no luck. So, I highly doubt they are using kosher cheese in these crackers.

Although pepperidge farm claims that their crackers are made with ‘ingredients that you can feel good about,” there’s no denying that they’re heavily processed.

While consuming Goldfish crackers in moderation once in a while poses no harm, binging on them regularly can be linked with risks like obesity, heart disease, and diabetes.

Goldfish crackers contain more than a generous amount of sodium – about 250mg per serving (around 55 pieces) in the cheddar variety.

The FDA points out that sodium includes a Daily Value (DV) under 2300 mg a day. And 250 mg of sodium present in these crackers represent around 11% of the total daily value.

Now you may think that it’s not much. But do you know Americans receive about 40% of their sodium intake from salty snacks like crackers?

That’s some food for thought.

Yes, Pepperidge farm uses MSG as a flavor enhancer in many of its Goldfish cracker varieties. For instance, some of them are Goldfish Epic Crunch nano, ranch, and honey BBQ flavors.

And even though the FDA has deemed MSG to be safe, its long-term effects have been called into question time and again.

Although further advanced research is warranted, a chronic intake of MSG is concerning to researchers for conditions like central nervous system (CNS) disorders, reproductive disorders, liver damage, and obesity.

So, there you go – 3 more reasons to skip non-kosher Goldfish. 🙂

Now that the main query is answered, let’s have a look at some other frequently asked questions.

All Goldfish cracker varieties don’t contain dead animal flesh. Therefore, yes – they are suitable for vegetarians. But since they include milk derivatives, they’re not ideal for vegans.

No, Goldfish crackers aren’t vegan. It’s listed on their site that the crackers are ‘always baked with real cheese.’ Sorry – these snacks are a far cry from being vegan.

Yes, Goldfish crackers are halal. All of the ingredients used in their making are acceptable by Halal standards.

People with a gluten allergy or Celiac Disease should avoid eating Goldfish crackers.

Therefore, if you are allergic to peanuts, I’d recommend skipping Goldfish.

No, goldfish crackers neither contain pork nor any pork-based ingredients.

Before you go, here’s a link to two of my favorite kosher snacks available on Amazon! You might want to give them a try, too!

Unfortunately, no – goldfish crackers aren’t kosher. An orthodox decree passed on by Rabbis was that one shouldn’t buy cheese unless it was made by or under the supervision of a learned jew. That’s because cheese contains animal rennet.

And since the cheese used in goldfish crackers isn’t monitored by an experienced jew, it’d automatically make the product non-kosher!

But don’t be disheartened. Goldfish crackers contain a good amount of MSG and are heavily processed too. So they’re not good for your health anyway!