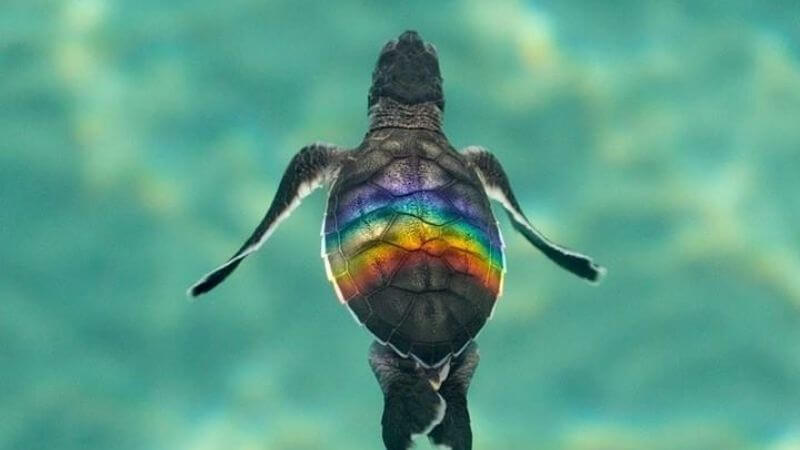 Several sites all over the internet have answered this query. They have mentioned that rainbow turtles dwell in the warm waters of the Southlands.

As confusing as it already is, these sites also bring up a mythical king named “Mumbo The Second,” who used to keep rainbow turtles as pets in the year 619 GUI.

Let me clear this all out first before we discuss it further.

First, these answers from the forums are not talking about a real turtle. It is about an adventure video game known as Zork. All the timelines, such as 619 GUI and places like Southlands, are elements from that video game.

Therefore, the answers you get in these forums are misleading ones.

On top of that, some sites have been copying from one another and are spreading incorrect information by confirming the existence of rainbow turtles.

So, we will take this burden upon ourselves and explore if rainbow turtles exist in real or not.

No, rainbow turtles aren’t real. Though there are multichromatic turtle species, there aren’t any with rainbow colors.

People have claimed that they have seen rainbow turtles basking on a log. Well, I had a similar experience, too.

Two years ago, I noticed a pond turtle with a rainbow-colored carapace.

But after watching closely, I found that it was the sunrays refracting on the water’s surface. This gave the impression that I was looking at a real rainbow turtle.

But in reality, it was a pond slider floating on a sunny day.

No rainbow-colored turtle has been discovered yet. The pictures of turtles with a rainbow displayed on Pinterest are all photoshopped.

Enough about mythical and photoshopped turtles. Let’s talk about the real deal (I mean real turtles).

Are There Colorful Turtles?

Different species of turtles have different colors. Some are bland, whereas some are pretty colorful. Most turtles come in various shades of green and brown with arrays of patterns on their carapace.

These patterns also come in a multitude of colors. They can be yellow, green, red, blue, brown, and orange.

Which Turtle Is The Most Colorful?

Most people consider the Hawksbill sea turtle the most colorful turtle species.

Its carapace has an amber background patterned in intricate black and has mottled-brown colors radiating to the sides.

This exclusive design makes the hawksbill turtle attractive and their carapace sought-after for home decor.

Sad to say, but they are smuggled worldwide for the same reason. Thus, it has caused a sharp decline in their population.

There’s another turtle known for its vivid colors: a painted turtle.

These turtles have a distinct color combination. Some painted turtles have black or olive skin with red or yellow stripes.

Even their plastron are of different colors.

Like stripes, the plastron can be either yellow or brown with red on the sides.

Reason Behind Different Shades Of Color In Turtles

You might have noticed that, just like the fishes, turtles also have a dark-tone carapace but a bright plastron.

This is because the bright colors in the plastron help reflect lights better – thus, making it challenging for the predators to spot them from underneath.

Although their camouflage technique doesn’t work quite well on humans, it works efficiently against other predators.

A fair amount of turtles do change their color as they get old. Additionally, the younger ones are usually much vividly colored than the adults.

One drastic change in a turtle’s color can be observed in the painted terrapins found in Malaysia, Sumatra, and Borneo.

The male’s head turns white during the mating season, and the light red stripes on its forehead become bloody red.

However, some painted turtle species do not change their color their entire lives. One such turtle is the North American painted turtle.

Can There Be Albino Turtles?

Though it is rare, albino turtles do exist. A surprising thing about them is that there are more in captivity than in the wild. There’s a reason for this.

An albino turtle is bright and easily spotted by predators. Thus, its chance of survival in the wild is slimmer compared to other colored turtles.

However, they do not have any threats in captivity – therefore, surviving for lengthy periods.

What Color Are Turtle Eyes?

A turtle’s eye can be black, blue, grey, red, yellow, brown, orange, and green. The stripes in the pupils are different in each species of turtle.

Turtles are already amazing creatures. And encountering a rainbow-colored turtle would be even more mind-boggling. But alas, there aren’t any. (Well, not discovered yet).

But there are biofluorescent sea turtles like hawksbill that glow on the ocean floor.

I guess we will have to make do with that for the time being.