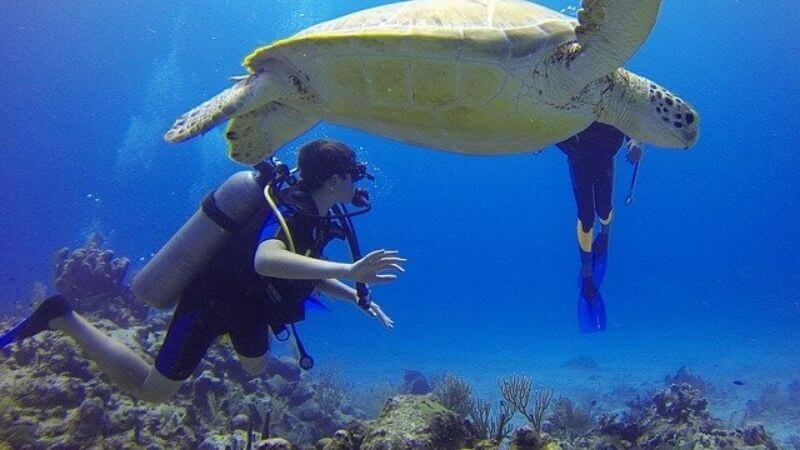 The internet is graced with clips of people snorkeling alongside sea turtles. This might make you believe that sea turtles, just like dolphins, enjoy human company in the wild.

So, based on these clips, can we conclude that sea turtles are friendly?

Sea turtles are calm creatures if we let them enjoy their own company. But, if you get too close to one, it will feel threatened and will try to bite you.

Unfortunately, every year divers report being bitten by sea turtles.

So, we can say that sea turtles are neither friendly nor hostile.

Here’s a clip of a green sea turtle trying to nip off a woman’s goggles.

So, Why Do Sea Turtles Get Aggressive?

For the record, sea turtles do not get aggressive all of a sudden. They only become dangerous when we get too near them, and nobody likes their privacy breached. They likely think of us as approaching predators, just like sharks and killer whales. So, they will kick off their survival instincts and get hostile.

Often tourists who go snorkeling or diving near sea turtles’ vicinity get attacked by them. Therefore, you should always listen to the tour guide’s instructions on what to do when sea turtles are near.

When Do Sea Turtles Become Aggressive?

There are few occasions when sea turtles become aggressive. They are:

Is It Possible To Keep Sea Turtles As Pets?

No, it isn’t possible to keep sea turtles as pets. They have an astounding growth rate, and not even the stock tanks will be enough to house them.

In addition, they require brackish water, making it even harder to mimic their natural habitat. So, next time you find a baby sea turtle on a beach, do not think of taking them home with you.

Additionally, it is illegal to keep them as pets. All seven species of sea turtles are listed under endangered species by IUCN.

Check out Can You Keep A Pet Sea Turtle?

Is It Harmful To Touch A Sea Turtle?

It isn’t harmful to touch sea turtles, but on the contrary, it is the opposite. Sea turtles are vulnerable to numerous bacteria and parasites that humans carry.

However, it can be dangerous to touch a sea turtle in the ocean. They can get hostile if you go near them, let alone touch them. To make matters worse, they are much faster than us in the water – thus, they can bite you if they feel threatened.

Now that you know sea turtles can bite you if they feel unsafe, let’s discuss how powerful their bite is.

How Powerful Is A Sea Turtle’s Bite?

A sea turtle can bite with a power of over 500 pounds. The bite force is directly related to the size of the turtle’s head. So, a sheer force of 500 pounds is fatal enough to take off a human’s digits.

For example, a loggerhead sea turtle’s bite force is powerful enough to break large oysters. Even sharks have a hard time cracking them.

Is It Okay To Touch Baby Sea Turtles?

You shouldn’t touch baby sea turtles with your hands, especially when they are about to head into the ocean. These hatchlings must crawl in the sand to imprint the whereabouts of the nest in their mind.

Imprinting helps them find their way back to the beach after they mature.

But if you pick them before they complete the imprinting process, you are only lowering the chances of that baby sea turtle’s survival.

Baby sea turtles have food sacs in their abdomen, which holds enough food for them to survive a few days.

However, these food sacs are highly fragile, and you might break them if you are careless with your handling.

Should You Turn A Sea Turtle If It’s Moving Away From The Ocean?

Right after nesting, sea turtles move towards the brightest spots. All sea turtles do this as the ocean gets illuminated by stars and the moon during the night.

So, you can gently turn them back into the direction of the ocean if they are heading the wrong way.

Should You Turn A Baby Sea Turtle If It’s Moving Away From The Ocean?

You need to be extra careful while turning baby turtles towards the ocean. This is because they have delicate food sacs on their stomach, which can break when mishandled.

Also, predators like birds, crabs, lizards, etc., wait for their chance to pick and scoot off with sea turtle hatchlings.

So, you can help the baby sea turtle by scaring off the predators while it makes its first steps towards the ocean.

Sea turtles will not get aggressive unless they sense danger.

The only time a sea turtle attacks us is when we pose a threat to them. For example, when we get too near them.

But, in actuality, we humans are a danger to these turtles. The plastic waste we dump every day in the ocean has caused a sharp decline in their population.

Sea turtles consume plastic waste, confusing them for jellyfish, their favorite food. And these wastes cause intestinal blockage, making it extremely hard to digest their regular food.

It further results in imbalanced buoyancy and stunts their growth.

So, instead of asking if sea turtles are friendly, we must ask the right question: Are we friendly towards them?