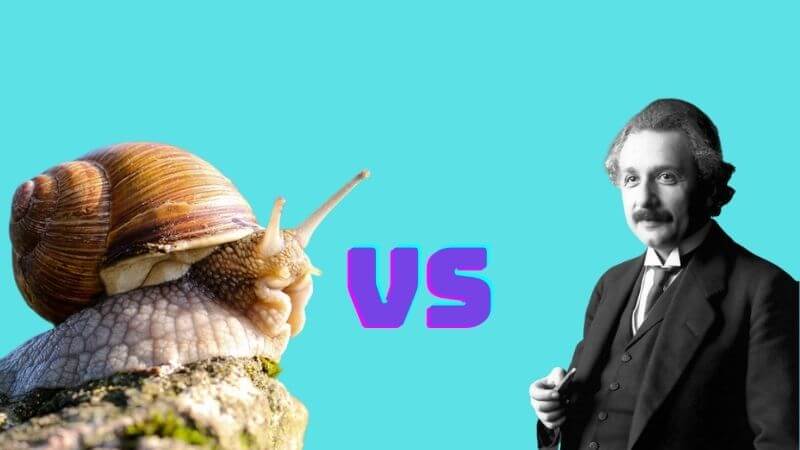 Intelligence is subjective. Let’s compare our climbing abilities with that of primates. It can be said that monkeys are a clear winner with insane climbing “intelligence.” But when it comes to carrying out complex tasks, no beings on the planet can outmatch us.

As I said, intelligence is a peculiar characteristic that all creatures are endowed with. So, it is a no-brainer that little pets like snails also have a distinctive thought process. But does it make them smart? How do you tell if snails are intelligent?

It has been proven that snails can learn new things through classical conditioning. For example, they can recognize their owner by smelling, use their sensing prowess to find food, throw love darts for mating, and often cover great distances.

Like us, they also have short-term and long-term memory, helping them form memories and extract them when needed.

However, it has also been discovered that snails’ intelligence varies from species to species. Like humans, no two snails are similar in terms of memory formation and retention abilities.

Research done at the Universities of Exeter and Aberystwyth on pond snails has revealed some interesting findings on how snails learn and memorize things.

They found out that snails basically use memory for two things – search for food and protection against predators. And even then, their memory retention varied from one individual snail to another.

And furthermore, they found that snails with strong food memory had poor predatory memory and vice versa.

This inversely proportional relationship between memory related to food search and predator avoidance suggests that snails aren’t too evolved.

How Long Can Snails Go Without Water?

Who Is Smarter? Captive Snail Or A Wild Snail?

Although every snail is different, most wild snails are smarter than captive ones. Unlike captive snails, wild ones are more exposed to natural settings. They are smart enough to remember threats and are apt in food searching ability, even during scarcity.

We now know that snails learn through memory retention. But what about those captive snails who haven’t experienced anything? Are they not smart enough?

Indeed, the wild snails are robust and have better cognitive abilities to adapt to changing environments. They will have to deal with both the food and predator issue, making them sharp enough to develop both kinds of intelligence.

Some Of The Smartest Things Snails Do

Although most think snails are slow and boring creatures, they are mystery creatures endowed with some unique features. Let me brief some of their abilities.

Snails have this unique ability to travel with minimal friction. They do this by tracking down the traces of slime left by their companions ahead.

Their kinesthetic intelligence enables them to balance their body in motion like the snail does in the animated movie “Turbo.”

They Use Their Tentacles To Find Food

The upper and lower sets of antennas, or tentacles, help snails spot food. These probes have olfactory nerve cells, which help them smell the periphery to aid in food hunt.

And once they are successful in foraging, the nerve cells in these tentacles pass this information to specialized neuronal cells, also known as ganglions. This is where they memorize their itinerary, aiding them in the next day’s adventure.

Some Of Them Throw Love Dart

Hermaphrodite snails are known to throw love darts at their potential mates. These bullets are filled with sperm to impregnate their prospective partner.

If snails weren’t intelligent, how could they come up with such an idea of making a sperm harpoon and ensuring their lineage?

They Can Learn New Things

Snails learn new things in the same way as dogs do. They do it with the help of an associative process in which a biological stimulus is paired with a neutral stimulus.

For example, suppose a snail spots algae in a damp area. In that case, it will automatically associate wet surfaces as hotspots where it can find food.

They Can Cover Great Lengths

Not all animals have snails’ extraordinary ability to adapt to a wide range of environments.

For example, L.fulica, commonly known as the Giant African Land snail, was found only on the coast of East Africa 200 years ago.

And as the naval trade flourished worldwide in the 19th century, these snails attached themselves to water vessels and began to appear much further afield.

As of now, it has invaded Asia, Europe, South America, and North America. As a result, these giant snails are now enlisted as one of the 100 most invasive species on the planet.

“I have two common garden snails I keep as pets. Don’t ask me why. It’s complicated. And in my opinion, it’s surprising how smart they actually are. Today I opened their box, and they were both asleep in their shells.

So I tapped on their shell, and they came out and started crawling around happily in my arms. They didn’t retreat in their shells even when I picked them up to move them.”

“They are much brighter than they appear. I had one quickly learn about the size of the wire mesh lid on the new tank. This one was curious and explored everything. The new cover had wider holes, so it could fit its body through but not the shell. So it tried the next spot. Same problem.

On the next hole, it poked its head through a little, moved on to another, realized they were the same size, and stopped trying.”

“My apple snails just have to hear the crinkling of the spinach packet & they are at the top of the tank in less than a blink. They use their foot as hands, using them to carry stuff, etc.”

“I have seen times when there is a piece of cucumber on their food dish, covered with snails. A snail will hang upside down from a branch and stick out his long neck and stretch down with his shell and body still sticking upside down to the branch and just fit his mouth in a bit of space on the cucumber among the snails crowded on the cucumber and will eat that way. That’s pretty clever.”

How Are Snails Smart?

Snails have thousands of neurons, each categorized into sets of several ganglions, helping them memorize and conduct daily chores. Thanks to eons of evolution, these neurons help them find food, avoid predators, and breed in the strangest of ways.

Yes, snails can learn by associative methods like classical conditioning and operant conditioning. They will pair biological stimulus with neutral stimulus and display a general behavior. For example, a snail will associate damp places as the hotspot for finding food.

As for operant conditioning, a simple demonstration is to poke an escaping snail with an object and push it back into the water. This will cause the snail to think it will get hurt if it approaches the enclosure lid and eventually stops trying to escape the tank.

Do Snails Have a Brain?

Although snails do not have a designated brain like mammals and avians, they have a group of neurons designed in sets, known as ganglia. This collective ganglion helps them perform their day-to-day activities and aids in associative learning – similar to how our brain functions.

Snails have poor eyesight than most animals. However, they have a keen sense of smell and touch that allow them to distinguish familiar from unfamiliar. This is why snails won’t retract inside their shell when touched by their owners.

You might have seen some hobbyists stroking their Giant African Snails. And let me tell you, these slimy pets were enjoying it.

Here’s a video of a snail sitting on its owner’s hand while taking a shower.

Do Snails Get Lonely?

Although snails do not have brains per se, they can still feel emotions and are affected by social isolation. Researchers have found out that isolated snails’ brains’ are WEAK in forming memories compared to those raised in groups.

Despite lacking a designated organ to call a brain, snails have sets of ganglions that function the same way brains do.

And to add further, we do not give these ganglions enough credit for their functionality. Our pets do not need to perform algorithmic tasks or be creative when searching for food.

Therefore, snails are smart enough to survive multiple mass extinctions and show no signs of stopping. Just look at how African Giant snails are conquering the world.