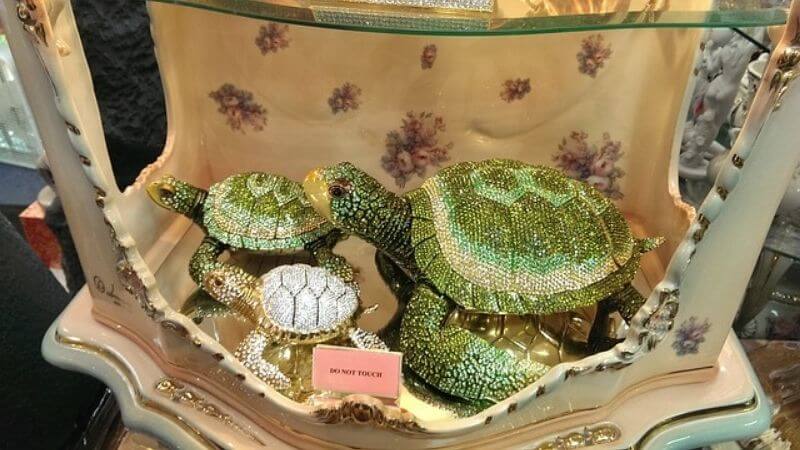 Turtles have been mentioned in artifacts and manuscripts of different cultures worldwide. Their antediluvian existence on this planet could be why we deeply associate with turtles and have made them a part of our culture. This is why they are seen as luck totems in many religions.

And in this article, we will discuss what turtles resemble in different cultures and why they are taken as a lucky charm.

Turtles are seen as a symbol of luck in religions around the world. They are considered a lucky charm that brings tranquility and good fortune to those who keep them in their homes.

Why Are Turtles Considered Lucky?

Turtles have been on this planet millions of years before humans. The first humans might have noticed that these reptiles held more importance for the planet and were more dear to the gods, which is why turtles are considered lucky.

Furthermore, humans associated a turtle’s long lifespan with their own age – thus, believing that keeping turtles in their home elongated their life. This is evident in most religions.

There are over 4300 religions worldwide. All these religions have mentioned turtles as a sign of luck in one way or another.

Here are some of the things turtles are associated with:

In Which Direction Should You Place Your Turtle To Bring Luck?

Turtles are mostly kept facing north to bring bliss and success. However, they can be placed in other directions, depending upon the home owner’s purpose.

Here’s a table to help you find the right location to place your turtle:

When Is The Best Day To Keep Turtles?

Wednesday, Thursday, and Friday are regarded as the most auspicious days to keep a turtle in the home.

Before placing the idol, ensure the place is safe and faces the appropriate direction. You can check the above table to know the right placement for your turtle.

Where Should You Keep Turtles To Bring Luck?

Keeping turtles in the right place helps channel positive energy in the house. Turtles in each specific room have their purpose. For example, turtle idols in the living room bring harmony to the family.

Turtles in the living room will unite bonds between family members. As a result, trust is maintained within the family.

Keeping turtles faced to the north prevents negative energy from entering the house.

Placing a turtle idol inside the fountain will magnify and radiate positive vibes.

Turtle figures placed in the backyard or lawn helps in stabilizing positive energy in the house.

Placing a turtle near the bed helps in dealing with anxiety and insomnia.

If your children are afraid of sleeping alone, tuck the turtle under their bed. This will help them sleep soundly.

Things You Should Know Before Keeping Turtle Figurine In The House

Do not keep turtle figurines in the bathroom or in the kitchen. This works adversely and can bring unfavorable misfortune to you and your family.

Also, do not keep chipped, broken, or cracked turtle effigies in your home.

Keep the area near the turtle clean. It shouldn’t be kept in a cluttered place.

Though turtles are favored as lucky charms for most, few cultures and religions consider them unlucky. In Judaism, the turtle is deemed to be unclean and shouldn’t be eaten.

What Does A Turtle’s Death Mean?

The sudden death of a turtle can make its owner feel suspicious of their fortune. However, it shouldn’t be considered a misfortune or a bad omen. But if you do not dispose of it soon, it can bring trouble.

We will now find how turtles resemble luck or the bringer of good news in cultures worldwide.

In Chinese culture, the importance of turtles has always been put on a pedestal. The primitive writings of the Chinese language were first engraved over a turtle’s carapace.

Also, in Taoism, the turtle is one of the four fabulous animals. The other three are unicorn, phoenix, and dragon.

It is also associated with water elements – thus, it is worshiped during planting season.

And during the demise of high-ranking military officers, the symbol of a turtle was used as a supporting memorial tablet. It was believed that the imitation of the turtle tomb promised long life to the descendants of the deceased.

Among the Feng Shui believers, a turtle is considered a luck enhancer. Therefore, keeping a turtle in the house bestows the family with wealth, good health, career rewards, and sound sleep.

You can place either a figure or a live turtle in the following position:

Here are some of the Feng shui turtle tips that you can use to spruce up your luck:

As the saying goes, fortune favors the bold. A turtle is considered a sign of strength in Hinduism. This means that luck follows the strong one.

In Hindu mythology, the world rests upon the shoulders of four elephants who stand on a turtle named Akupara. This is why the turtle has been symbolized as a virtue of strength.

One of the gods of the holy trinity, Lord Vishnu, was a turtle in his 2nd reincarnation.

Vishnu is the preserver of worlds – thus, a turtle is associated with preserving or protecting wealth, fortune, and health.

In Japanese culture, it is believed that keeping turtles in the house promotes the health of the family members.

And during wedding ceremonies, the netsuke carvers feature turtles in the event to mark it as an auspicious day.

Turtle is also a symbol of Kompira, the god of the sea-faring people. People living near the coastal areas have turtle souvenirs in their houses to protect them from sea-related disasters.

Fishermen and boat crews also worship turtles to keep them safe in the sea.

Turtle is recurrently mentioned in the folk stories of the indigenous groups in North America. Their stories often start with the World Turtle carrying the earth on its back.

They even refer to North America as Turtle Island. When the world was covered by great waters, it was Mikinaak, “The Great Turtle,” who offered his back to keep the world afloat.

Hence, indigenous groups of North America symbolize turtles with hope, a savior, and their protector.

In the islands, the turtle is seen akin to the war god Tu. It was a traditional custom among warriors to draw tattoo marks of turtles on their bodies.

This was supposedly done to please the war god and help them remain alive during the war.

Final Words On Are Turtles Lucky

Turtles are considered paragons of luck in most religions and nations. Analyzing modern architecture, it is evident that these beliefs are still in practice.

For the Feng shui believers, turtles are embodied as a positive energy channeling medium.

And for the Hindus, who believe in Vastu Shastra, a turtle symbolizes wealth and good health.

One cannot be sure how true these articles of faith are, but you will certainly realize how much positive energy they radiate in the house. Well, they sure have lightened my home.