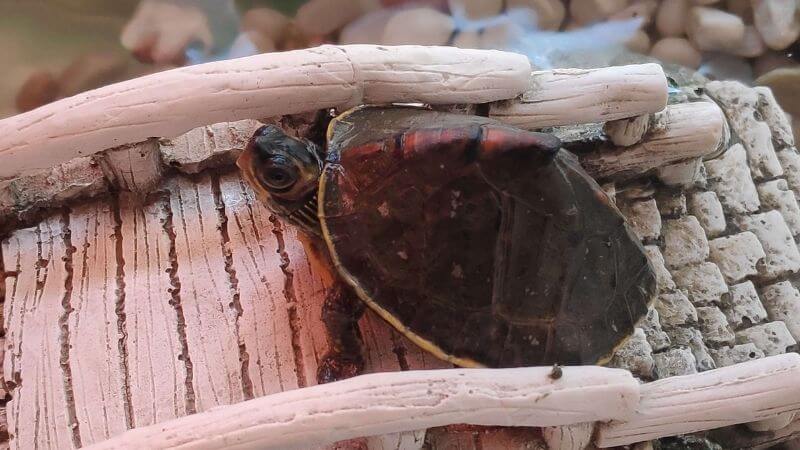 The environment and circumstances widely determine a turtle’s sleeping pattern it’s in. Some owners claim their turtles sleep at night and stay active during the daytime, while others choose to differ. So, for once and for all, let’s find out—are turtles nocturnal?

No, turtles are diurnal creatures that remain active during the daytime and sleep through the night—except for few species like Asian Box Turtles and Green Sea Turtles. Turtles are not nocturnal because they lack essential senses like night vision to protect themselves against predators.

That being said, turtles prefer to pursue some tasks at night instead of daytime.

Pet turtles aren’t nocturnal either. If anything, they’re more diurnal than turtles found in the wild. This is because pet turtles will mimic their owner’s routine over time. On top of that, life is more routine-like within the four corners of the like—fuelling a turtle’s diurnal habits even more.

Now that we’ve discussed are turtles nocturnal, let’s explore further exciting facts and phenomena about turtles and sleep that you’d love to know.

Why Are Turtles Diurnal Creatures?

Turtles lack acute senses and reflexes required to be active and safe at night. They don’t have night vision, besides having quite average hearing and smelling powers. And they also need UVB light for proper development. That’s why turtles are diurnal creatures.

Turtles have well-developed eyesight that can quickly adapt depending on the environment they’re in. However, like us, they can’t see clearly at night because they lack sufficient intensity and spectral range.

An animal must have tapetum lucidum in their eyes to be able to see at night. It is a reflective membrane that’s positioned right behind the eyes and acts as a mirror.

Once again, like us, turtles need a few moments to adjust their vision in the dark. Once they get used to the darkness, they can move around, but not as efficiently.

As turtle owners, you’re probably aware that they’re not the sharpest tools in the shed. To be nocturnal, animals must have keen senses to forage food and keep themselves safe from predators.

We’ve already established that turtles can’t see in the dark. But other than that, their hearing and smelling capabilities aren’t that great too.

Since turtles don’t have eardrums or external ears, they can only hear sounds between 200 to 750 hertz. And while their smelling senses are a tad bit better, it’s still not enough to smell hunters from a safe range.

To sum up, turtles haven’t adapted to have night vision, potent smelling capacity, and keen ears to hunt, hide, or forage. That’s why they’re diurnal creatures for most parts.

Basking is an essential ritual in a turtle’s day-to-day life directly linked with bones and shells’ development.

UVB lights help turtles process the calcium content, which ensures strong bone growth. It also helps to keep the algae growth on the shell at bay—preventing any potential bacterial infection in the future.

And as you already know, turtles love to bask during the day to absorb as much UVB light from the sunlight as possible. If they sleep during the daytime, it significantly compromises the basking opportunities.

Here’s the mercury vapor bulbs that I use for all basking spots for my turtles. These full-spectrum bulbs emit both UVA and UVB lights that turtles need.

While basking lamps offer a reasonable extent of light to bask in, it can never be a complete substitute for natural sunlight.

What Night Activities Do Turtles Perform?

Apart from sleeping, there are certain things that turtles do at night, which are quite crucial to their existence. Usually, male turtles attend breeding sites at night because the risks are limited during the night. Likewise, female turtles will come ashore to lay eggs.

Generally, at night, female turtles will come to the land searching for a suitable egg-laying place. Once a site is selected, they’ll dig holes and safely deposit their eggs there.

The answer to do turtles sleep underwater totally depends on the species and their preference. However, most turtles can sleep underwater or on the water surface, such as painted turtles and sliders. During underwater slumber, turtles breathe through the cloacal respiration process.

However, the underwater sleep sessions shouldn’t be any longer than 4-7 hours every night.

On the other hand, some species like box turtles can’t and won’t sleep underwater. These species can’t even swim well in deep or running water.

Thus, they need a warm and cozy terrarium to spend the night.

And for turtles that prefer to sleep underwater, you should make sure that there are ample space and enough oxygen for them to breathe in safely.

For this, you’ll need a robust filter and air pump (optional) that’ll help to keep the water clean and well-oxygenated at all times.

In most cases, sleeping turtles do not drown since they’ll quickly come to the surface when needs arise. However, if turtles are trapped underwater, the stress will decrease oxygen from their body swiftly, causing them to die within a few minutes.

Research has revealed that some turtles can hibernate underwater for several months.

But things can go swiftly go south when stress strikes. Make sure that there’re no decorations or plants in the tank that can trap the turtle underwater.

You have to be even more careful with baby turtles. The water level should never be too high because they need to resurface without entirely leaving the bottom.

It’s recommended that the water level should only be about two-and-a-half times the height of the baby turtle.

Do Turtles Close Their Eyes When Sleeping?

Turtles have not one, not two, but three eyelids. So, yes. Turtles close their eyes when sleeping. Besides the lower and upper eyelids, they have an additional membrane called a nictitating membrane that slides in horizontally from the side. Its chief function is to protect the eyeballs.

The cool thing about the nictitating membrane is that since it’s translucent, turtles can partially see even when the eyes are closed.

And it may even appear that the turtle is blinking even when the eyes are closed.

However, turtles lack eyelashes. In fact, eyelashes are commonly just a mammal thing.

How Long Do Turtles Sleep?

Turtles sleep for about 5-7 hours every night. The duration can vary slightly depending on the age and species of the turtle. The environment they’re in also plays a role. For instance, if a turtle lives in a high predation area, it probably gets less sleep.

And turtles are light sleepers. They don’t experience deep sleep as we do.

Why Do Turtles Sleep With Legs Out?

Watching a turtle sleep with legs and feet out is quite an amusing sight. Since turtles are cold-blooded animals, they can’t regulate temperature internally. Thus, when they bask and receive vital UV rays of warmth, they stretch their legs to absorb additional heat.

Another benefit is that when the feet are fully widened out, a turtle’s surface area increases. Once again, allowing the turtle to soak in more heat.

However, this sight can be only be seen when they’re not basking. At night, they don’t sleep with their legs out.

Why Is My Turtle Sleeping A Lot?

A turtle rarely sleeps long hours. However, suppose your turtle is sleeping too much. In that case, it could be because winter’s approaching and the water temperature is too cold. A dysfunctional UV light and an illness could also be the reasons behind it.

As hardy as turtles may look, they’re quite sensitive to the external environment like all reptiles. Turtles can easily experience even the most subtle change in air pressure, humidity, and temperature.

As soon as turtles smell winter in the air, they will start the brumating process.

Since they’re cold-blooded animals that can’t regulate their body temperature, the body automatically slows down the metabolism as the temperature plunges.

For the same reasons stated above, a turtle can sleep too much and too often if the water temperature is low.

And it’s not necessary that water will only become colder in the winter. Depending on the water you’re using, the tank’s placement, and the climate you’re in, the tank’s water can still be cold during summer or spring, or autumn.

You need to secure that there’s a proper heating system in place that keeps the water warm. I’d recommend you to buy a self-regulating heater that can shut off when the water temperature reaches a certain level and turn it on again when needed.

Here’s the most common water temperature recommendation for some turtle species:

75 to 82 degree Fahrenheit for painted turtles

76 to 84 degree Fahrenheit for red-eared sliders

Since box turtles are terrestrial species, let’s look at the recommended temperature of the terrarium instead. For them, the ideal temperature usually clocks in between 70 to 90 degrees. You must regulate the temperature depending on the species of turtle.

This will make the turtle lethargic and prone to illnesses, resulting in a lot of sleeping even during the daytime.

Like all animals, turtles prefer to sleep and save energy when they’re sick. Illnesses can also heavily compromise bodily functions, leaving the turtle with no choice but to sleep.

The most common medical conditions in turtles are shell infections and fractures, parasitical infections, abscesses, respiratory diseases, and vitamin A deficiency.

If your turtle is sleeping too much, it’s most likely because of sickness, even when it’s not cold. In that case, you should contact the vet and seek proper medical advice.

Diet and tank’s environment play vital roles in determining the health status of turtles. Ensure that you give the turtle a well-rounded diet and the tank’s parameters are met to prevent most illnesses.

Conclusion On Are Turtles Nocturnal

So, the answer to are turtles nocturnal is no, they’re not. Turtles are diurnal creatures that love to sleep at night and remain active during the day.

There are a few evolutionary reasons that could explain why turtles are not nocturnal. For instance, turtles can’t see in the dark. They also can’t hear or smell very well to keep the dangers at bay at night. Likewise, turtles need UV light to regulate their body temperature, which can only be received during the daytime by basking.

However, there are a few activities turtles perform at night. For instance, turtles actively search for an egg-laying spot at night because the risks are limited at this time.

Turtles sleep for about 5-7 hours every night. The answer may differ slightly based on the age and species of the turtle. However, if your turtle is sleeping too much, there are a few things to be considered.

Turtles usually sleep more when the winter approaches as their body automatically prepare to hibernate. Colder water temperature and lack of proper basking could also cause the turtle to sleep more since it won’t have much energy in the body.

Lastly, aliments like respiratory infection and vitamin A deficiency could also cause the turtle to be lazy and sleep more.