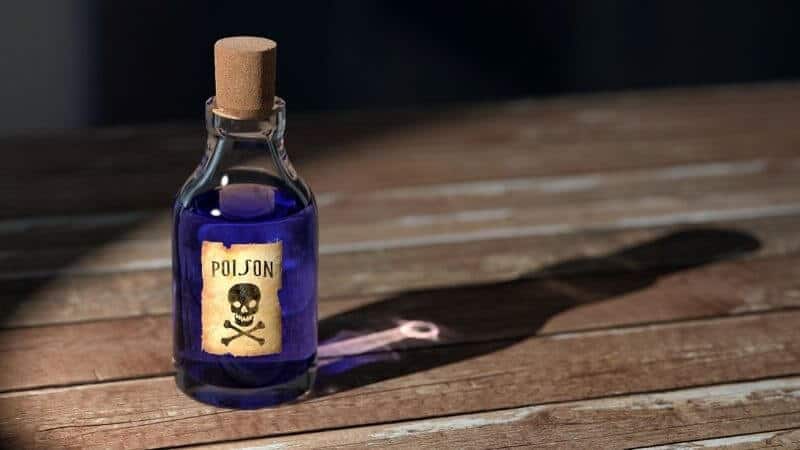 Of many things to be known for, a reptile is notorious for its venom and poison. And in the reptile family, the snakes have the deadliest venoms. What about the other members? So, as a reptile owner, you might be curious whether your pet turtles are poisonous or not.

So, are turtles poisonous? No, turtles aren’t poisonous, but there have been reports of people becoming sick after consuming sea turtles like Hawksbill turtles and Green Sea turtles. These sea turtles consume every sort of marine plant and jellyfish, which results in the formation of toxic elements in their body. Thus, when we consume these turtles, the toxins will have undesirable effects if they aren’t cooked properly.

Dying from eating a marine turtle is rare, but we can never rule out the possibility. There have been cases in the South Pacific region of Tonga, where 18 people had suffered from severe illness after consuming a Hawksbill turtle. Two of them died shortly after consumption.

Cases like these are heard every year in the coastal regions where marine turtles are eaten as delicacies. In countries like Srilanka, Indonesia, the Philippines, New Guinea, these incidents occur frequently.

Which Turtles Are Poisonous?

Do Turtles Eat Apples? Can Apple Seeds Cause Cyanide Poisoning?

No, Turtles are not venomous. For a creature to be venomous, it needs to have toxins that can be passed to the other animal through its fang, sting, or spine. And a turtle doesn’t have any of those features. This makes turtles non-venomous.

If you are confused between venomous and poisonous, let me tell you the difference.

A vicious animal uses its venom for self-defense or hunting its prey by injecting toxins to subdue its target’s movement. Even minuscule doses of such poisons are incredibly effective. A quarter of all snake species are known to carry venoms in their fangs.

Another way to deliver venom is by wounding the prey with the help of their sting. Honey bees, wasps, and other insects pass on venom using this technique.

The spine of the sea urchins is also venomous and can cause severe inflammation if not treated immediately. Its spine penetrates the tissue of the victim and will break off once it enters the skin.

Now, what about poisonous?

Most amphibians are poisonous due to their consumption of toxic plants and foods in their habitat. For instance, pufferfish is considered poisonous because it gets its toxin from a marine bacterium, making it more deadly than cyanide.

For an animal to be poisonous, it should have toxic elements that can quickly travel within the body and cause death in the victim. Unlike venoms, these poisons aren’t created by the creature itself. Instead, they are the byproduct of what they consume in their habitat. These toxins have passive yet deadliest effects.

Now that you know that turtles are neither poisonous nor venomous, are you sure they are completely safe?

Although turtles are neither poisonous nor venomous, they aren’t entirely safe to be handled without proper guidelines. Turtles are known for carrying salmonella bacteria in their body. So, touching and caressing them can transfer the bacteria from their body to yours.

What Is Salmonella In Turtles?

Salmonella is a bacteria that is present on a turtle’s outer skin and its shell. Though they aren’t harmful to turtles, they are detrimental to us. Eating and drinking from the same water where they excrete are why a turtle gets infected with Salmonella.

As mentioned earlier, though the bacteria aren’t hazardous for turtles, they are pretty harmful to humans.

There are no exact symptoms of salmonella seen in humans. Diarrhea, abdominal cramps, and fever do occur when a person is infected with salmonella. Often people recover in a few days without specific medication.

However, it can lead to dire consequences for people with pre-existing conditions and children.

So, if you want to prevent you or your kids from getting salmonella, you need to follow these guidelines.

Who Is Most Likely To Be Infected With Salmonella?

Anyone who doesn’t adopt necessary hygiene after being in contact with the turtle can be infected with salmonella. However, kids are most prone to be infected because they have weaker immune systems, making them vulnerable to bacteria.

Turtles That Can Be Dangerous To Humans

Often regarded as gentle creatures, some turtles can get agitated if you pose a threat to them. They will instantly be protective and will attack you. Snapping turtles can be threatening when mishandled due to their sharp predatory skills. Among sea turtles, Loggerheads and Leatherbacks top the list of dangerous turtles for humans.

Snapping turtles are aquatic turtles that can cover great distances for foraging. They have strong bite force, and they can leap for a surprising distance too. They get irritated quickly and will try to make themselves big by stretching. When you get face to face with a snapping turtle, its sheer size might seem intimidating. When in danger, they will jump as high as 4 inches and try to bite anyone who threatens them.

There have been several instances of Snapping turtles biting a human’s hand and causing injuries. Check out this video.

It is one of the meanest looking turtles in the freshwater turtle family. It bears a close resemblance to alligators, from which it gets its name. This turtle is identical in size to other turtles during birth but will outgrow other freshwater turtles eventually.

The fact that this turtle has no natural predator makes it even more menacing. Its bite force is powerful and can crush a prey’s skull in a single bite. Its neck can stretch much longer than other turtles’ during attacks. So while holding it, make sure you are holding it from afar.

Despite being large, they can hide quite well and prey in stealth mode. So next time you visit ponds or lakes, make sure there is no Alligator Snapping turtle population nearby.

Though there haven’t been any conclusive incidents of an Alligator Snapping Turtle attacking humans, I am sure you do not want to be the first victim.

The largest among all turtles, a Leatherback sea turtle is over 9ft in length and weighs more than 1500 pounds. Though the direct hostile encounter between this turtle and human hasn’t yet been captured in lenses, there are some videos where these heavyweight turtles were banging their heads on smaller boats.

Loggerhead sea turtles have giant heads, the size of a logger, from which it gets its name. Sometimes, these Loggerheads can get aggressive during their hunt, which might trigger them to bite anything that moves nearby. There are few cases documented where Loggerhead turtles try to bite the divers in the ocean.

Here is footage of a Loggerhead bashing its body on a boat.

Final Say On Are Turtles Poisonous

We are the species that have made the ocean unlivable for these turtles. Our vast nets to catch schools of fishes also trap these turtles. Being stuck and unable to reach the surface, thousands of turtles drown every year.

Our pollution through plastic waste, sewage, oil spills is making their lives harsher with every passing day. So, together, we need to conserve these beautiful creatures who have every right to live on this planet as they have been since the era of dinosaurs.

So next time if someone asks if turtles are poisonous, reply with, “no, turtles are not toxic, but we are for them.”