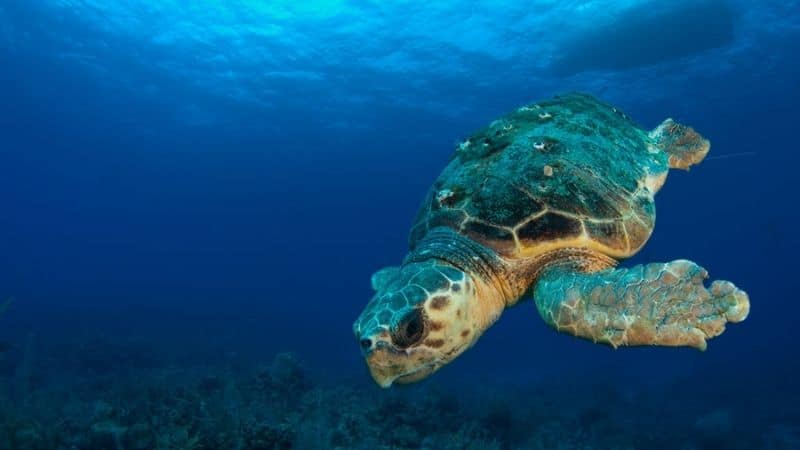 Many ancient cultures believed that the world is resting on a giant sea turtle’s shell. Now, some may find it amusing, some may call it nonsense, but for a wide range of marine organisms, this has been true all along.

Researchers have discovered that sea turtles can carry over 100,00 tiny organisms on their shells.

And as turtles make journeys of thousands of miles to reach ocean basins, these tiny hitchhikers keep them company throughout.

And one such hitchhiker is barnacles.

But what do they mean for turtles? Are they harmful to the sea turtles? Or do they have an interspecies friendship? Let’s find out.

Barnacles On Turtles — What Does It Mean?

Barnacles are a specialized group of crustaceans that attach themselves to substrates like ships, rocks, whales, and sea turtles. Most barnacles are harmless to sea turtles as they only attach to the shell or exterior skin, but some can burrow into the skin and cause infections.

Now that the general overview is clear, let’s move on to a detailed dissection of barnacles on turtles.

Barnacles are tiny marine crustaceans with an external shell that attach themselves permanently to a surface. Greyish white, we once thought them to be closely related to snails but actually come from a family of crabs.

A careful look into their hard plates, and you’ll see a crab-like body plan.

Since barnacles are sessile animals that don’t use their legs, they have evolved to use their legs for a different purpose. Can you guess?

Barnacles eat with their legs.

The modified legs, known as cirri, beat rhythmically to draw detritus and plankton from the water column and transport them into the shell for consumption.

Currently, there are 29 species of known barnacles found on turtles.

The most commonly found barnacles on sea turtles come from the Chelonibia genus, aptly named after the host (Chelonia = turtle).

If all the barnacles present on a turtle’s back are of the same size and species, it means the turtle was inactive for a long time.

Why Do Barnacles Attach To Turtles?

Because barnacles are filter feeders, they have to be near a constant flow of water around them. And as sessile creatures that don’t use legs, they have two options: settling in an area with frequent water movement or settling in a moving substrate as a sea turtle. By and large, the latter is a more convenient option.

Once attached to the turtle’s shell, the barnacle will try to make a permanent home using various ways. It can either firmly maintain a grip, cement to the shell, or bore into it.

Now that it’s clear what barnacles are and why they attach to turtles, let’s find out the effects of this million-year-old spectacle.

Are Barnacles Harmful To Turtles?

Opinion among marine biologists differs regarding the consequences of barnacles on turtles. Some believe this is an extraordinary example of coevolution, where each species is continually adapting to the change in another. However, others believe that the cost-benefit balance between sea turtles and these little hitchhikers is heavily one-sided.

Most Barnacles aren’t damaging to sea turtles since these minute creatures usually just attach to the shell or skin on the outside.

However, when too many barnacles stick to a sea turtle, this will cause discomfort and make the reptile prone to wounds and infections.

In the long run, all barnacles increase the surface and diminish the turtle’s overall hydrodynamic shape.

Barnacles also tend to encrust over the turtle’s nostrils and eyes—impairing vision and sense of smell.

The severity of the effect of barnacles on turtles also depends on the species of the crustaceans.

Excessive barnacles on turtles is also a telltale sign of general poor health.

Fortunately, sea turtles are incredibly resilient animals that can recover from such infestations. However, sometimes, it can be fatal.

Are Barnacles Helpful To Turtles?

It may surprise you to know this, but barnacles can sometimes also be lifesaving for sea turtles—literally! Barnacles often provide camouflage to sea turtles against predators like poachers, sharks, and crabs. Similarly, barnacles are helping scientists study sea turtles and their migrations to better conserve them.

A sea turtle covered in barnacles looks eerily like a rock—warding off potential predators.

And as for helping sea turtles’ conservation, scientists from Griffith University have effectively used barnacles as devices to map turtle migration. This will ultimately help to better detect regions crucial for the conservation of endangered sea turtle species.

Sea turtles’ migrations are among the longest in the animal kingdom. They cross entire ocean basins just to get to their favourite nesting beaches. That’s why, for long, it has been incredibly difficult and expensive to keep track of their journeys.

And now scientists are using turtle-born barnacles as a simple and cost-effective way to solve this challenge.

The price of satellite tracking of a turtle averages around $8,000. Barnacle biopsies cost $20.

Can Sea Turtles Remove Barnacles By Themselves?

Barnacle colonies thrive and grow in moving substrates like sea turtles. But unfortunately, sea turtles don’t have powerful or efficient ways of getting rid of these parasites. To an extent, they try to remove it with the help of their flippers, but it’s not always effective.

Barnacles sticking on a female turtle usually fall off during the mating process.

This is because the male turtle will get on top of the female, and the friction produced during copulation can scrub off the barnacles.

So, it’s relatively easier for female sea turtles to get rid of barnacles than their male counterparts.

For the latter group, their only bets are shell getting scratched somewhere or scuffled on the rocks.

Thus, we can conclude that there’s no fully effective natural way for turtles to get rid of barnacles by themselves. So, can humans help them?

Can You Remove Barnacles From Sea Turtles?

A turtle covered in barnacle can often be mistaken for a rock. And barnacles attach to a turtle’s shell and skin firmly. It’s quite complex to remove them. Thus, it’s not advised or allowed for a regular person to attempt that. In fact, in the US, it’s against the law.

If you come across a turtle covered in barnacles, try to consult a marine wildlife rehabilitation centre where the turtle will be in the safe hands of marine experts.

Forceful removal of barnacles is very painful and can even prove fatal. As tough as a turtle looks, its carapace and plastron are very soft.

Thus, forcibly removing the barnacles can inflict more wounds and injuries that can manifest into life-threatening wounds.

Once the barnacles are removed, they’ll open the gateway to many open wounds on the shell and the skin. And if by any chance these wounds get contaminated, the treatment will become super challenging and painful. Hygiene and sanitation play a crucial role in the removal of barnacles.

In the United States, attempting to remove barnacles from turtles without a legal permit is an offence. It is considered a violation of the Endangered Species Act—and they can charge you for harassment against an endangered animal.

So, if you ever come across a barnacle-covered turtle washed up to the shore, contact the nearest wildlife animal centre.

Usually, the professional treatment involves putting the turtle in freshwater first to ensure no additional barnacles growth. This way, the algae will fall off the shell in the next 2-3 days, too.

Next, experts delicately remove the barnacles using specialized tools. They also carry out blood tests and other additional tests to gauge the turtle’s health.

And once perfectly healthy and recovered, the turtle will go back to its home in the sea.

Here’s a heartwarming video of professionals removing barnacles off turtles before releasing the reptiles into their habitat:

The symbiotic relationship between turtles and barnacles is truly unique, although it can be exploitative sometimes.

Generally, barnacles do not kill turtles. They have been riding on sea turtles’ back and embarking on journeys of thousands of kilometres for millions of years. However, sometimes, infestations lead to infections, which can kill turtles.

That being said, some barnacle species severely burrow into the turtle’s skin and create open areas for infections. Likewise, if they create a colony near the eye or nostrils area, the turtle can permanently lose the sense of sight and smell.

In extreme cases, the barnacles may also affect the turtle’s mobility and expose it to several serious dangers.

Conclusion On Barnacles On Turtles

In this article, I have tried to shed as much light as possible on the symbiotic relationship between turtles and barnacles.

Just around 5% of the world’s oceans have been explored and charted. What goes beneath the vast blue blanket of water is still unknown to humanity.

So, we don’t have the right to bluntly state whether barnacles on turtles are good or bad. In fact, it’s just the way of life for these two species.

As sessile creatures, barnacles rely on sea turtles for food and mobility. And turtles sometimes rely on barnacles to provide camouflage against predators.

Together, willingly or unwillingly, they cross several ocean basins throughout their lifetime.

Most barnacles, and in moderate amounts, aren’t harmful to sea turtles.

But some species of barnacles dig deep into the skin and exploit wounds. And this can be hazardous to a turtle’s health.