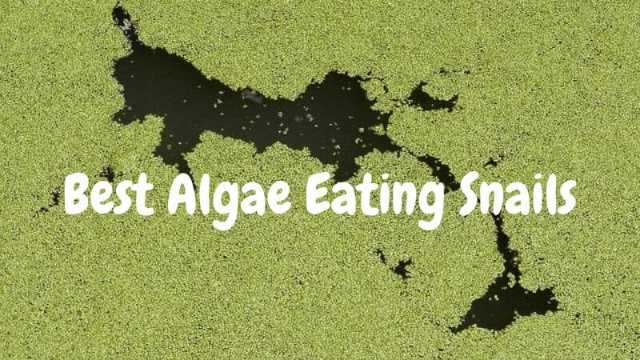 Algae infestation is the most common complaint that makes way to my inbox from aquarists every other day. Last week, one of our fellow readers asked for help with algae blooms in his cichlid tank. Thinking that the ammonia spike had caused this, he tried changing the water daily for about a week. But the problem persisted.

So, he dimmed the lighting, cut back on feeding, and then added a second filter. Even then, the problem didn’t go away, so he cleaned the gravel and plants. He even discarded old tank ornaments.

Here’s the image he sent me.

He reported that he had treated his tank using Accu-clear and aquarium klear products, but neither made any difference.

Despite his best effort, he couldn’t eliminate the algae bloom on the tank’s walls.

Listening to his woes, we thought that our recommendation for other chemical products would definitely not console him.

Therefore, we suggested getting a couple of algae-eating snails, Amano shrimps, and a pair of otocinclus. This has always worked for us, so I hoped it did the same wonder for him, too.

Anyways, these types of queries often find their way to our mail, and we try our best to help our fellow readers.

So, in this article, we will discuss choosing the perfect snail to clean algae in your aquarium.

Which Are The Best Algae-Eating Snails?

Nerite snails are hands down the best algae-eating snails for any tank. They can live on any kind of water – freshwater, brackish water, and even saltwater. Another great thing about them is that they do not breed in freshwater – thus, you won’t have to worry about snail infestation.

However, to assemble a complete cleaning crew, you need to get different snails, just like the Easy Company from the Band Of Brothers.

So, without further ado, let’s discuss some snail species that make a fine addition to your cleaning crew.

We will begin by introducing freshwater snails as they are the most popular ones. Here are some snails to help you get rid of algae in your freshwater aquarium.

We definitely want to start with the best, and the top contender is nerite snail. These snails are excellent at scraping algae from the glass. In addition, they move faster than other snails and are relentless algae feeders.

There are more than a few things to like about nerite snails. They look great, have excellent work ethic (grazing on algae), do not breed in freshwater, and need little to no care.

Though there are several types of snails in nerite species, they all are highly efficient in removing algae.

Put a couple of them in murky algae-filled water, and you will definitely notice the difference within 3 days.

As I said, they require minimal care because they get all the nutrients from algae – saving you the hassle of providing extra supplements.

Unlike mystery snails who need calcium frequently, you don’t have to worry about that with nerites.

However, there’s a downside to keeping nerites in the tank. Although their eggs won’t hatch in the freshwater, they will not stop laying patches of eggs all over your tank.

Another bad news is that nerite snails do not lay eggs in clutches. Instead, they lay individual pieces of eggs everywhere. Some snail keepers may find it repulsive to see infertile eggs covering their tank.

Also, there aren’t any known fish that prefer eating these eggs. So, you will have to scrape them manually.

Mystery snails grow relatively bigger than nerites that only grow an inch long. Mystery snails are only the size of your thumb when you get them from the seller. But eventually, they will grow up to three inches in length.

So, these bottom feeders must be kept in tanks that can fit more than 10 gallons of water.

Compared to nerite snails, mystery snails, on the other hand, are less effective in eating algae. That being said, they still eat softer algae and other biofilms.

They are more of a scavenger that binge on leftover food, fish poop, green algae, and decomposing pellets.

Although they eat a wide variety of food, you will also need to supplement their diet with calcium blocks to help with their shell development.

Ramshorn snails are tinier than mystery snails and nerite snails. But don’t underestimate their ability to clean algae from your tank’s acrylic. They eat anything from decaying plants and algae to fish poop.

However, there’s a tradeoff when you keep ramshorns to remove algae. They are hermaphrodites, which is why they are a heck of a fast breeder.

They reach maturity within four weeks and lay their first eggs when they are six weeks old. And these clutches will hatch within two to three weeks.

The eggs will take no longer than a fortnight to hatch. So, although algae won’t be a problem for you if you keep ramshorns, their growing population can worry you.

During the daytime, Malaysian trumpet snails rarely come up to the surface. They like to dwell under the substrate most of their time. You could say that they are like earthworms in the aquarium. And of course, their benefits are not limited to eating algae and scavenging only.

Their constant underground activities help aerate the soil and make the substrate more fertile for your plants to grow.

And during the night, they will resurface and dine on soft algae.

Naturally, freshwater snails do not thrive in a saltwater tank. But nerite snails are an exception. However, if you want to introduce snails other than nerites in a saltwater aquarium, here are two of the best candidates to do your bidding.

Turbo snails are one of the best picks to remove algae from your saltwater tank.

Some popular turbo snails are the Astrea turbo, Mexican turbo, and Zebra turbo. All three are efficient in removing algae, so you won’t go wrong by getting either of them. In addition, they cost less than 10 bucks. Quite a bang for a buck, eh?

Although four inches isn’t that big, it is significant for a snail’s size. So, unlike other snails that can be housed in a 10-gallon tank, you will need a larger tank to house turbos.

Their relentless feeding nature will drastically reduce algae within days. However, there’s a catch.

Unlike nerite snails who don’t need a supplement diet, you will have to provide a healthy and varied diet to turbos. But their diet isn’t that complex. You can feed them algae wafers and regular snail food.

However, they aren’t particularly a fan of hair algae. So, I rate them second, behind turbo snails.

Regardless, they can right themselves up if turned upside down, which the turbos can’t do. This makes trochus snails less vulnerable to predator attacks.

Do Snails Eat Every Kind Of Algae?

Not all snails eat every kind of algae. For example, most snails only eat soft algae. However, nerite snails are in a league of their own, meaning they eat almost all kinds of algae in both freshwater and saltwater aquarium.

I would personally recommend you get a collection of these snails.

While your nerites will be busy scraping algae off the acrylic, your mystery and ramshorns will help with the leftovers on the substrate.

And Malaysian trumpet snail is there to unearth and eat the buried remnants.

Which is Better At Eating Algae? Snail Or Shrimp?

From my experience over the years, I find snails better at cleaning algae. However, if it is carrion or the dead plant leaves, I would hire shrimp to do the job.

Some shrimp species like Amano are on the same level as nerite snails. They can live in both freshwater and saltwater. And they are dexterous at eating every kind of algae. They even eat the dreaded black beard algae!

Not all snails are good at removing algae from your tank. This is why a cleaning crew is necessary to create a hospitable environment for your fish.

Along with nerites, you can also include Amano shrimps, ramshorn snails, otocinclus, and pleco to make a complete band of algae-eating brothers.