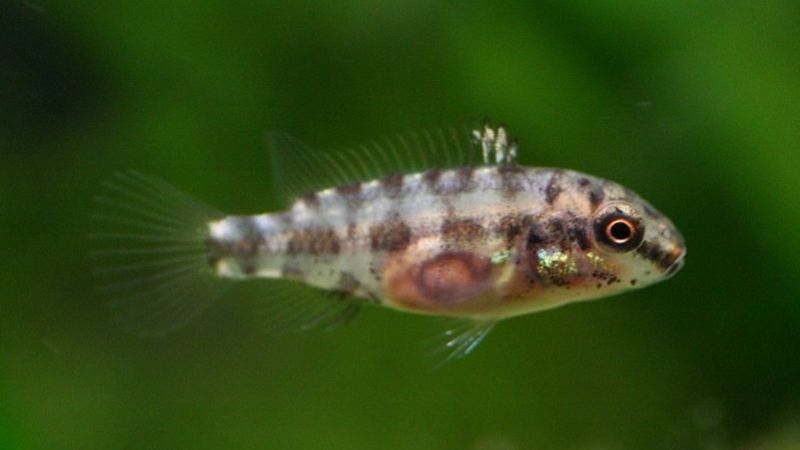 Kribensis Cichlid, affectionately known as kribs, are colorful, bottom-dwelling fish from freshwater rivers around Niger Delta. Their current scientific name is P. pulcher, which translates to ‘beautiful belly fish’ in Latin. And what a fitting name – isn’t it?

Raising and breeding cichlids is easy on paper. Most guides I found on the internet said they’ll just about live and breed in any tank without any special arrangements. But this is far from the truth, although they make one hardy species.

So, in this blog, I’ll tell you everything about it in detail. Hop on!

The best male-to-female ratio in the tank is 1:1, although the rule of thumb is 1 male for every two females. Adding more males to the tank will only result in aggression, territorial fights, and bullying.

Also, cichlids mate for life. Once they find a partner, they stick with it through the end. When pairs are formed, they often pick on ‘loner’ females and bully them relentlessly.

A user on Tropical Fish Forums shared that he has 1 male and 2 female kribs in a tank. And naturally, the single female was bullied by the couple. Reportedly, the male would chase the poor female at ‘speed of light’ if she went anywhere near them.

In Kribensis cichlids, both males and females have beautiful purplish-red bellies that complement the green and blue hues of the rest of the body. So, the main differentiating factors between them are size, the intensity of color, and the shape of fins.

Let’s look at them one by one.

Male krib cichlids are larger in size than their female counterparts. They are usually 3.5 to 4 inches long, while females clock in at 3 inches. However, heightwise, they’re pretty similar.

Both male and female krib cichlids have similar color patterns, but a female’s body is considerably more pigmented. Likewise, the purple patch on a male’s body is a lot fainter.

On the other hand, the female’s patch has intense purple colors – even more so when spawning.

Similarly, the brown and golden bands running lengthwise along the top half in males are light. In contrast, on females, they’re much clearer and dramatic.

Males usually have several gold-edged black egg spots on the tail, dorsal fin, and gill cover. But females only have a few of them or not at all.

According to scientists from the University of Alberta, Canada, the water’s pH level determines the sex ratio in the brood. At around ph 7.0, the brood will yield an equal number of male and female fish. Anything alkaline than that will result in more males, and acidic will result in more females.

It’s even possible that the brood contains almost entirely a single sex. Thus, if you are interested in breeding krib cichlids, make sure to test the waters and add pH-altering agents if needed.

How To Breed Kribensis Cichlids?

During the breeding period, the female cichlid’s body turns into a characteristic cherry red color. Like with most other fish species, you could trigger the breeding season by maintaining optimum water conditions and providing them with a nutritious diet.

You can raise the water temperature to 78-80°F to encourage them to spawn. Make sure the water’s pH level is around 7 to ensure a diverse clutch.

If you’re serious about breeding and raising young cichlids, transfer the mating pair to a separate breeding tank. That being said, they also tend to breed and survive a fair bit in community tanks as long as there are no predators.

As for their diet, you can give them bloodworms, mosquito larvae, brine shrimp, and daphnia. Feeding nutritious food at this time is especially important because once the females give birth, they tend to lose weight while caring for the newborns.

Once the pair is ready, they start looking for a suitable place to lay the eggs. In the wild, cichlids usually dig burrows beneath stones and logs. In a tank, a flower pot or halved coconut shell will work just fine. While searching for the right place, cichlids tend to get quite agitated with other bottom dwellers.

There’s an exciting mating ritual among kribensis cichlids. The female will hold her body in an S shape and press her abdomen against the male’s snout. She will then rapidly shake her body in a vibrating motion. This ritual will go on for a couple of days.

Interestingly, the telltale sign of spawning is the sudden disappearance of the female cichlid. She will quietly hide inside the selected cave and lay around 200-300 eggs.

The female will then stay inside and take care of the eggs – removing damaged and fungus-ed ones. Similarly, the male stays nearby and guards the area.

Once the female kribensis lays eggs, they hatch after around 48 hours. Initially, the mother cichlid takes full responsibility for the fry. She will even show some characteristics of mouthbrooding cichlids. For instance, she will catch stray fry with her mouth and bring them back to the group.

For the first few days, the fry survive on the egg sacs attached to them. The egg sac is super nutritious – especially rich in protein that’s important for rapid development.

If the mother cichlid senses danger nearby, she will shake her head sideways to let the babies know. The tiny fry will then sink to the bottom of the tank for safety.

After about 5 days of hatching, the fry leave the mother’s nest and become free-swimming juveniles. But even then, the parents, especially the mother, don’t abandon the parenting duty.

The parents will keep a close eye on their fry. For example, if there’s danger nearby, they’ll quickly and knowingly swim to an open area to draw the predator’s attention.

Since kribensis cichlids make such amazing parents, there’s not much you have to do to rear the fry. Just make sure the tank has a steady food supply and regularly perform frequent but partial water changes.

As for the fry’s food, feed them powdered fish food and liquid fish food. You’ll often see them follow their parents’ lead while eating and foraging. The parents usually herd them to the tangles of java moss, where they can easily find food. They’ll even chew bigger pieces of food and spit out minced particles for the young ones to feed.

Over the next 3-4 weeks, the fry will grow rapidly. They’ll also be able to consume adult food. At around 6 weeks of age, you can move the juveniles to the main tank – however, you’ll only be able to determine the age at about 3 months.

If you’re interested to know when to separate fry from mother, head over here!

So, in a nutshell, the best male to female ratio for kribs is 1:1. Since they choose a single partner for life, the poor single ladies often get bullied by the couples.