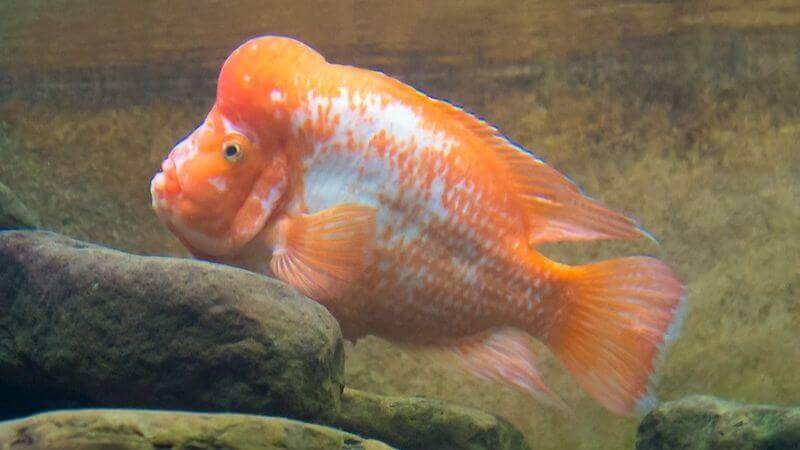 Let’s cut to the chase. Red devil cichlids are not suitable for a community tank.

So, there’s no ideal tankmate for your red devil cichlid, per se. Just look at their name – they weren’t named red devils for nothing!

That being said, some fishkeepers have successfully raised them along with other equally aggressive fish. The secret to that is raising them together right from the start.

Even then, the chances are 50-50. As juveniles, these aggressive species can be tolerant of each other. But as they grow, they will be right at each other’s throats. That’s just how they’re hard-wired.

In this blog, I will share about a few just as fierce species, if not more, who can hold their ground when face to face with a red devil.

But take these suggestions with a pinch of salt. Also, every day, do a headcount, monitor the activities quickly, and be on the lookout for signs of injury or stress.

Now, without further ado, let’s dive right into the topic.

The convict cichlid gets its moniker from the iconic black and white stripes on its body. These are some of the most aggressive cichlids in the fishkeeping trade. They are just as fierce as they look.

The male convict cichlid can grow up to 6 inches, while the female will clock in at 4.5 inches.

Besides the striking appearance, convict cichlids are best known for their aggression and territorial behavior. While these traits are found in almost all cichlids, a convict’s attitude is right off the charts.

So, there’s no doubt that a convict can hold its ground well enough against a red devil cichlid.

If a fish ever encroaches its territory, a convict cichlid will defend it with all of its force. The intruder will be chased and harassed mercilessly.

Convict cichlids love to mark territory and spend all of their time guarding it.

Understanding their aggressive and territorial tendencies is essential if you want to pair them with red devils. You must ensure the tank is spacious and includes plenty of decors for everyone to claim.

From my experience, I have found that convict cichlids are significantly less territorial if the tank is large and includes plenty of places to hunker down.

As for general activity, these fish love to swim around a lot. They spend a considerable amount of time in the middle of the tank. They will also occasionally check the substrate to do some digging.

They are also innately curious and love to investigate different parts of the aquarium often.

And since convict cichlids make dedicated parents, they get super possessive and aggressive during the mating season.

These cichlids were named after the legendary American boxer Jack Dempsey. So, you can guess how fierce and ruthless these fish are! They’ll undoubtedly be able to match a red devil’s aggression level.

On average, a jack dempsey cichlid will grow anywhere between 10-15 inches. The females are usually a couple of inches smaller than males.

Jack dempseys are notorious for their anger and don’t play too well with others, but it doesn’t mean they cannot be kept with other species. Many aquarists I know have successfully done so.

Those who know how to raise them alongside aggressive species like the red devil can create a thriving aquarium. And those who don’t know will have a hard time keeping them from harassing their tankmates.

These fish do particularly well in strategically overstocked tanks as they find it difficult to single out and pick on one fish.

A male will establish his territory and actively guard it – chasing away any intruder. Therefore, you need to ensure the tank has plenty of caves and crevices for the fish to claim.

Remember that the mated pair will be super intolerant of other fish and will not think twice before bullying someone to death. Thus, as soon as you see a pair has formed, make sure to transfer them to a separate tank.

Also, you should never put two sexually mature males together. They will fight right till the end until one of them dies.

Firemouth cichlids are just as ferocious as their name, if not more. They are super aggressive and territorial – even more so during the mating season. So, there’s no doubt that they will pose as strong competition for your red devil cichlids.

If you’re going to place firemouths and red devils together, you will need to ensure the tank is super spacious. This will help them draw out their own territories and moderate any aggression that will occur.

Also, firemouths make exemplary parents. These monogamous fish make highly dedicated parents. Thus, they are super possessive about their eggs and fry and will lash without a doubt at anyone who comes near.

Firemouths are not schooling fish. In the tank, they will just keep to themselves.

The male will expand his gills during mating to warn other males to stay out of his territory.

I don’t know how to put it, but firemouth cichlids are somewhat OCD. They will constantly move and rearrange things in the tank. They love to dig the substrate too. This is something you need to heed when considering how to decorate the tank.

If there’s plenty of space, a firemouth’s aggression can be largely kept under control. Unfortunately, too many fish crammed in a small tank is a recipe for wars, and this species is not an exception. Firemouths aren’t too good at handling stress.

In terms of general activity, these fish are active swimmers who love to swim near the middle of the tank.

How To Raise pH In African Cichlid Tank? Can You Use Baking Soda?

Jaguar cichlids are uber aggressive fish. They will randomly pick fights with just about anyone and try to hunt down small fish and invertebrates. Thus, they don’t make great community fish.

Also, a jaguar cichlid can grow anywhere between 16-20 inches.

And for these very reasons, they make suitable candidates to be kept in a red devil cichlid tank.

Jaguar cichlids are highly territorial and will fiercely guard the areas they claim. And if anybody intrudes, they won’t think twice before bullying the poor guy to the brink of death.

Aggression and hostility are ingrained in a jaguar cichlid’s brain. You can do your bit to minimize the aggression by staying on top of the water conditions and providing an adequate diet.

Thus, once again, you need to make sure the tank is spacious enough and houses plenty of decors. You can use large objects as decors like snag and rocks. Don’t add plants. These fish will destroy them in an instant.

What’s interesting is that even bonded pairs fight with each other from time to time. Thus, we only recommend keeping jaguar cichlids if you have a fair bit of fishkeeping experience.

When it comes to the general behavior, you will often see the fish swimming around the bottom and investigating different nooks and crannies. They also love to dig around the substrate and topple decors here and there.

Red rainbowfish are among the deadliest aquarium fish in my experience – I am not even exaggerating. These carnivores have a super-sharp set of teeth. They will show absolutely no fear when viciously attacking any new object introduced in the tank.

Even your red devil cichlid may appear timid in front of a red rainbow fish.

Fast-moving and aggressive, red wolf fish are likely to attack even larger tankmates. Thus, they are often advised to be kept alone or with other equally large and fast-moving fish.

As juveniles, these fish can be pretty shy at first and will appreciate plenty of covers. Make sure that you keep the tanks tightly covered, as they jump when spooked.

Red rainbowfish will devour smaller fish at the earliest possible and are super intolerant of conspecifics, often fighting with them to death.

If you are adding red rainbowfish to a red devil tank, ensure the tank is very spacious to begin with, and includes plenty of hiding spots.

So, that was our curated list of other aggressive fish that can survive in a red devil cichlid tank. TL;DR – it included convicts, jack dempseys, firemouths, jaguars, and red wolf cichlids.

If you raise these cichlids together right from the start, there are slim chances of cohabitation. As adults, it’s nearly impossible! So, be careful – you definitely don’t want your tank to look like a murder scene.