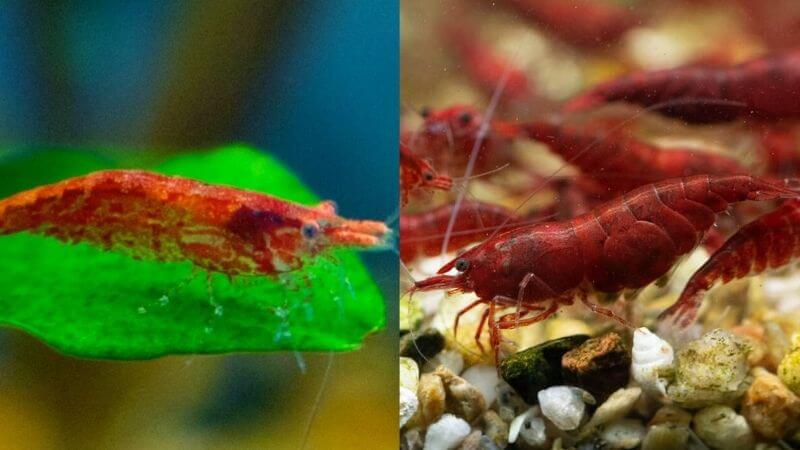 Most aquarists get into a dilemma when getting Cherry Shrimps for their tank. The confusion is usually about the colors. With many variants in the Cherry Shrimp species, you might want to go through the available choices and choose the one that catches your eye. However, most hobbyists think that Bloody Mary Shrimps falls under the same breed category as Cherry Shrimp. But it isn’t.

So let’s discuss the similarities and differences between these two species of shrimps.

Despite having that red color similar to a Cherry Shrimp, breeders claim that they do not fall under the same variant. There is a conflicting viewpoint that the Bloody Mary Shrimps are bred from Dwarf Chocolate Shrimp.

Cherry shrimps, on the other hand, are a variant that has several types depending upon the color of their exoskeleton. Some variants of cherry shrimps are Red Cherry Shrimp, Sakura Grade, High Sakura, Fire Red Grade shrimp, etc.

Color-wise, a first-timer won’t be able to distinguish Bloody Mary Shrimps from Cherry Shrimps. However, if you look closely, you might be able to see the differences in their appearance.

The Bloody Mary Shrimps have a transparent red color through which you can see their internals. In contrast, the cherry shrimps come in several colors, with the popular one being the opaque red.

You can differentiate their color by shining light on them and checking the transparency. For example, when lights fall on the Red Bloody Mary Shrimp’s body, you can see their insides. But in the case of Red Cherry Shrimps, the light won’t pass through them.

Do Cherry Shrimps Eat Hair Algae? What About Blue-Green And Black Beard Algae?

What Eats Ghost Shrimps? Beware Of These Culprits

Another factor is that these Bloody Mary Shrimps are imported from Taiwan and are claimed to be an original breed. So, the growing demand and importing factor have also raised these beautiful red shrimps’ prices in the US.

Both these shrimps are originally from Taiwan. They both need the same water parameters to survive and thrive. Though they are from the other side of the globe, they are now widely available in North America and Europe.

To determine a Cherry Shrimp’s sex, you have to notice their sizes. The males are smaller than the females. Notice their tails too. Shrimps carry their eggs in their tails, so the female shrimp’s tail will be broader than males with a narrower tail. Female Cherry Shrimps have ovaries sheathed on their sides, also known as “saddle” among the shrimp-keeping community.

Furthermore, you can also differentiate them by the richness in their color. For example, females tend to have richer and more opaque colors than males.

As for the Bloody Mary Shrimp, it will be a bit harder for one to tell which one’s male and which one’s female. Both males and females are of similar size, and their tails aren’t much different. Only when the female is pregnant, the yellow dot on the back of her head is seen. And also, the eggs below the torso are seen.

Both these shrimps are easy to breed in your aquarium. For breeding Bloody Mary Shrimps, it is achievable in your home tank. But as it is hard to distinguish between males and females, getting both genders can be challenging. So it will be better if you buy a troupe of these shrimps instead of singling out or purchasing a pair.

It is recommended that you only buy single female Bloody Mary. One female will breed enough fry to occupy the whole tank, so you don’t have an overpopulation of Blood Mary Shrimps in your tank.

For Cherry Shrimps, you can breed them in your house aquarium too. But, again, you need to focus on their diet and water parameters. The younglings can grow into adults only when there aren’t any predator tank mates in the aquarium. Otherwise, their small sizes will make them a feeder diet for these predators.

Both the Bloody Mary Shrimps and Cherry Shrimps are small and vulnerable to large tank mates that aren’t vegetarian. So keep them with Otocinclus, Ruby Tetra, Small Guppies, Neon Tetra, Swordtail, Nerite Snails, other shrimps, etc.

Tankmates you need to avoid are Goldfish, Angelfish, Bettas, Cichlids, Frogs, Turtles, Crayfish, Gourami, Danios, and other shrimps larger than them.

It is found that ghost shrimps eat Cherry Shrimps and Bloody Mary Shrimps when kept in the same tank. But if you want to keep these shrimps together with ghost shrimps, then you need to plant your tank heavily so that they can escape and hide among plants when in danger.

The compatibility between these two shrimps is great. You can keep them together in the same tank and find them to be perfect tank mates. They will even breed and produce new crossbreed. Both are calm in temperament, thus helping to create a harmonious environment in the tank.

If you are confused about which to keep among these two beautiful red shrimps, I suggest getting both of them. The Bloody Mary shrimps will cost a bit more than the Cherry shrimps but will give your aquarium the aesthetically pleasing vibes. And also, they are compatible with each other’s presence in the same tank.

And if you are making shrimp-tank only, then you needn’t worry about tank mates. Instead, keep them together with other shrimps, and you will have the perfect shrimp tank.

Why Do My Ghost Shrimps Keep Dying? How Can You Stop This?

Whisker Shrimp vs. Ghost Shrimp | Which Is Easy To Keep?