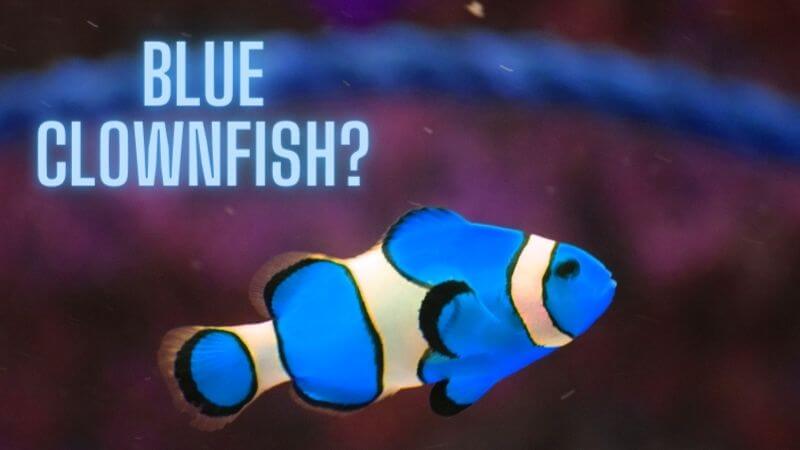 I was gobsmacked when I first typed ‘blue clownfish’ in the Google search box. Dozens and dozens of photos of blue clownfish – ranging in shades from mild baby blues to bold ultramarines. They seemed too good to be true but so real at the same time.

After all, there are blue pitbulls, and all dogs started out as wolves, didn’t they? With all the advances in science and technology, the idea of a blue clownfish didn’t seem farfetched to me.

Cutting to the chase, do blue clownfish exist?

All the photos of clownfish, painted different shades of blue from head to tail that pop up in Google Images, are fake. As of now, no such fish exists. However, breeders and hobbyists alike have successfully bred clownfish with hints and specks of blue here and there. Therefore, a blue clownfish may not be pie in the sky in a couple of years from now.

That was some disappointing paragraph, wasn’t it?

Now, let me get to the bottom of all the reasons that led us to believe in blue clownfish in the first place – an April Fool’s Day prank, a photoshop contest, a shady clip doing the rounds of the internet, and whatnot!

In 2015, Saltwater Aquarium, a popular e-commerce site based in the US, posted a bewitching photo of a blue clownfish in a popular forum.

Apparently, the fish was bred using genetically modified lightning maroon clownfish and hippo tang DNA. It was priced at $149.99, and there was just 1 specimen left!!

Hobbyists were quick to react to it. While some LOL’ed, others showed genuine interest in getting their hands on this mystical creature.

But a quick look at the date confirmed my doubts. It was posted on April 1st, 2015.

It was an April Fool’s prank. Downright cruel, wasn’t it?

Here’s how users reacted once they found out the truth.

“That’s a fantastic deal! Hoping someone snatches that up quickly.”

“Now, only if we could find an orange hippo tang. Cool photo, though. Hahaha.”

They played along quite well!

The second photo that led me to believe in blue clownfish turns out to be a morphed picture created for a design contest named The Blues 3.

I don’t know what Photoshop tricks creator MaestroRami pulled, but this blue fish looked so realistic. What a beautiful shade of midnight blue!

Reportedly, it was awarded 3 out of 5 stars. But I’d give it at least 4 even though it misguided me and toyed with my feelings. Dramatic much…

Here’s the video I’m talking about.

If you think the video is cryptic, you should check out the uploader’s username: Frostbite the Annunaki Ice Indotaurus.

Once again, I don’t know what strings the uploader pulled, but I must admit the video looks super realistic.

However, what I found dodgier is that the uploader has mentioned he got the blue clownfish from Tropical Lagoon Pet Store based in Maryland, US.

I then naturally scoured through the website, going through every segment and post with a fine-tooth comb, but didn’t find any trace of a blue clownfish.

And by the way, the fish is named shark.

Where Does The Blue Clownfish Exist?

I hate to break this news to you, but as of now, blue clownfish only exists in a video game for mobiles called Tap Tap Fish: Abyssrium.

I haven’t played it yet, but it’s described as a relaxing game that helps relieve stress and calm the player’s mind.

In the game, blue clownfish are the third species listed on the Saltwater Tank’s Normal Fish tab and the first hidden fish in the list – whatever that means!

Turns out the blue clownfish counts towards the Clownfish total, helping you unlock gobies next!

This all sounds interesting. I might give this game a go.

Now, remember I said there are a few specimens available in the trade with hints of blue in different parts of the body?

Let’s see what it’s all about.

Breeding a true blue clownfish is comparable to eggs in moonshine. But every year, breeders are getting closer – slowly but surely – to develop domesticated breeds with an increasing amount of blue in their bodies.

And remember, there’s at least one known clownfish species with a fair share of blue in their bars – blue stripe clownfish.

So, it’s not a wide stretch to assume that this pigment can be selectively bred for in a range of clownfish species and strains.

Look at this beautiful clownfish with a considerable amount of blue in its body.

As you can see in the picture, the blue coloration is most apparent where the white bars are outlined with black color.

Some of ORA Farm’s black snow clownfish also come with a high degree of blue color, as shown in the pic below.

But still, it’ll most probably be a good number of generations until we see a truly blue strain of clownfish. There are more wishes than stars…

Don’t set your hopes high. We’re not talking about an all-blue specimen here. But as I said before, hobbyists do breed clownfish with more or less hints of blue every once in a while.

Have a look at a few pictures that I collected from different threads.

Note: All the comments mentioned below solely belong to the respective authors!

“Blue shade is not anything new among designer clowns – snowflakes and snow onyx in particular. And it’s not considered a deformity.”

“My Picasso clown has a beautiful neon blue accent. It’s really cool. It’d be awesome to see that color get prominent.”

“Every single snowflake clownfish that I’ve ever owned (I think 6 of them now) have had a little shade of blue right where the black meets the white.”

“My ultra phantom clownfish has a pretty good amount of blue in it. Is it normal?”

“I paid for a large tomato clownfish that has a pretty blue stripe.”

While researching for this blog, I came across a Redditor who pretty decently explained why we may not get a true blue clownfish anytime soon.

Why Don’t We Have A True Blue Clownfish Yet?

Blue is not a color that can be developed if it doesn’t exist in the fish’s genetic package in the first place. Almost all “blues” in fish come from structural colors.

In clownfish, the blue shade is achieved by layering nacreous (pearlescent-reflective) skin layers over a black pigmented base. And what’s reflected back out is blue light, while everything else is absorbed by black.

Therefore, the only place clowns will ever express blues are those complicated structures that have evolved – mainly along the black margins of the reflective white bars.

Red, yellow, and black are common pigments that exist in the orange areas of the clown – and those pigments are easily selected by nature.

Frankly, I don’t think I can comprehend this explanation by fellow Redditor exothermos loud and clear. If you understood, let me know in the comments below!

From what I understood, breeding a true blue clownfish will still be wishful thinking for years to come.

Now, let’s answer some of the most frequently answered questions before ending this article.

Blue clownfish doesn’t exist yet. But if it did, I’m sure it’d cost over $100, at least for the first few years, as most rare and designer clownfish do.

What Is The Rarest Clownfish?

Blue stripe clownfish get their moniker from the brilliant white markings that overlay the pigment from the body color below, which gives the stripes a beautiful blue sheen.

Is There Electric Blue Clownfish Available For Sale?

Like blue or green or pink, a purple clownfish doesn’t exist currently. However, an online fish store named iBluwater recently got their hands on a gold striped maroon clownfish that almost has a deep purple – plum-colored – body topped off with a bright orange bottom lip.

Final Words: Are There Any Blue Clownfish?

Don’t want to be the bearer of bad news, but there are no blue clownfish in real life. They are only available on a game called Tap Tap Fish: Abyssrium. All the photos of blue clownfish that you can find on the internet are results of a prank someone pulled years ago and submission for a photoshop competition.

However, as you can see in the photos above, clownfish with hints of blue here and there are not uncommon. So maybe we will have a true blue clownfish very soon!