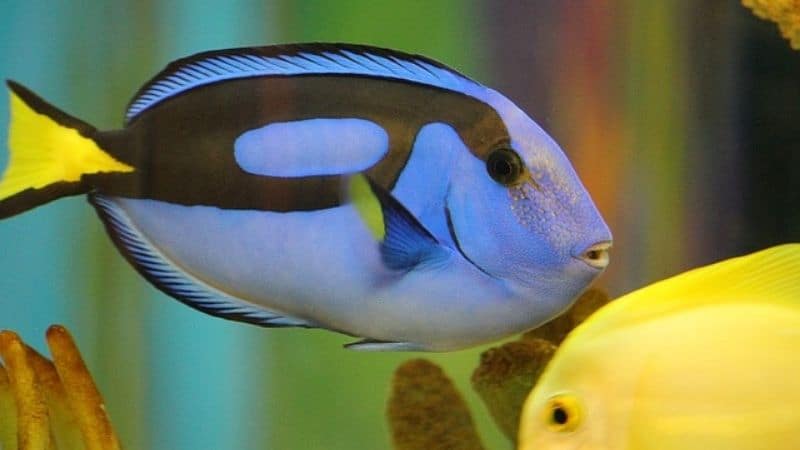 I was just six years old when Finding Nemo first came out. I remember nagging my mom to buy me my very own Nemo and Dory for days.

Only when I got older and wiser, I realized maintaining a saltwater tank when you don’t have much idea or experience is like getting blood out of a stone. I wish I was exaggerating.

With our Dory turning into a bold protagonist from a gullible sidekick in the new feature film Finding Dory, I knew many children would relentlessly persuade their parents to get them a blue hippo tang as I did many moons ago.

But there are more wishes than stars, my friend!

It turns out that blue hippo tangs don’t make the best of pets. In the wrong environments, they can turn sinister. I wish I was exaggerating once again.

For starters, let’s talk about the ideal blue hippo tang tank size. I bet you won’t like my answer.

What Is The Ideal Blue Hippo Tang Tank Size?

Blue hippo tangs grow big. They can grow over a foot long in just 2 years. That’s about 12 inches. Also, they have a nasty temperament. Therefore, the ideal blue hippo tang size is 180 gallons (680L) for a single fish.

Initially, when the fish is young, you can get away with keeping it in smaller tanks. But down the road, you’ll eventually need to spend lavishly in a big tank.

So, I recommend getting a big tank in the first place.

But as treacherous as small tanks are, big tanks too can be overwhelming to manage if you’re testing the water for the first time.

And that’s the space required for a single blue hippo tang.

Actually, I know exactly where the problem lies. Caught from the wild, these poor fish pop up in fish stores as tiny 1-inch fish. That is just 2.5 cm.

They buy the tang fish and plop it into a pretty starter tank – oblivious about the looming problem in the near future.

And if their foot-long size wasn’t a reason strong enough to not bring them home, blue hippo tangs are active, shoaling swimmers.

But besides requiring to live in shoals, blue tangs also need plenty of personal space at the same time. So naturally, it’s TOUGH to recreate that amount of space in home aquariums.

Adding all of these needs (caveats) together, you’re looking at a staggering tank size.

This is why I, alongside several other passionate tang lovers, strongly advocate for tanks over 180 gallons (680L).

But don’t worry. If you’re not planning to get a 180-gallon tank right off the bat, I’ll share the appropriate tank size for various growth stages of their lives.

Blue hippo tangs are often sold as 1-inch-long juveniles. Therefore, at this point, they can easily be kept in nano tanks.

When they’re about 2-5 inches long, they need a bare minimum of 75 gallons.

Once they reach 5-8 inches, you need to upgrade to at least 125 gallons.

And finally, by the time they reach their final adult size, which is 12 inches, you should make a provision of at least 180 gallons for a single fish.

By the way, blue hippo tangs reach their average adult length by 5 years of age.

I realize that the aforementioned recommendations will be outside many hobbyists’ budgets.

But it is what it is – I would rather be honest and realistic about the tank requirements upfront than sugarcoat and put you in a difficult situation later.

I have seen one too many local fish stores knowingly selling 1-inch-long blue hippo tangs in a small tank to innocent and new hobbyists after tossing morality out the window, of course.

Below, I’ve put together a bunch of responses shared by hobbyists on what they think is the right tank size for blue hippo tangs. This is my attempt to offer you a well-rounded and comprehensive outlook on a single platform.

Let’s have a look!

Note: All the answers shared below solely belong to their respective authors.

“I would recommend nothing smaller than a 6x2x2 180-gallon tank. In fact, something in the 180-240 range. Besides being one of the largest tangs, they’re also prone to behaving oddly and developing HLLE in smaller tanks.”

“Yep. I agree on a minimum of 180 gallons, with the most important thing being 6 ft length. Even then, a lot of people argue that 180 is way too small. I know hobbyists who’ll say an 8 ft tank is the minimum.”

“The tank’s length is absolutely more important than depth or width. But they need at least 2-inch width to comfortably turn around.”

“I can’t imagine keeping them in any tank that’s 8 ft long and 3 ft wide.”

“Hippos get really big and have a tendency to graze and swim among rocks. I keep one in a 46-gallon tank but he’s only 4 inches long ATM. I’m almost done with a big upgrade. He’s going to love the new tank.”

“Blue hippo tangs are twitchy fish to start with. I have one in a 7 ft tank and even that is a push!”

“I have a 125-gallon tank and still won’t get a hippo tang. I would love to have one, but I don’t think there would be enough swimming room when it reaches adult size.”

Judging by the above responses, we can safely conclude that these fish are not meant for small tanks!

If you’re still not convinced, here are a few reasons why blue hippo tangs don’t belong in small tanks.

Why Shouldn’t You Keep Blue Hippo Tangs In Small Tanks?

Scientists and hobbyists alike haven’t yet found a way to breed blue hippo tangs in captivity. So every single one of them is caught in the wild. Used to endless choppy waters of the oceans, they’re captured, packed and confined to a life in captivity overnight.

This should be a reason alone to not raise blue hippo tangs. But I’ll give you a few more reasons why.

By now, you know that blue hippo tangs grow pretty big. Thus, lack of space directly translates to high levels of unsolicited stress. And when under stress, fish produce a certain hormone called cortisol in excess, which results in suppressed appetite and lowered immunity.

And these two reasons are more than enough to deteriorate your fish’s health. In the long run, your fish’s lifespan will be definitely suppressed.

By the way, when stressed, blue hippo tangs tend to stab other residents with razor-sharp spines.

There’s a misconception that smaller tanks are easier to maintain than big ones. But a small volume of water means you will have a far more difficult time keeping the parameters clean and stable.

Besides getting polluted quickly with dangerous levels of ammonia and nitrites, the changes occur swiftly and often prove fatal before they can be corrected.

Water Temperature Fluctuates Too Fast And Too Often

Do you know water temperature fluctuates a lot more in small tanks than it does in big ones? So it can be a hard feat to maintain the right temperature for your blue tang.

The temperature can change swiftly with even the slightest stimulus, like keeping a window open or turning the tank’s light on for prolonged hours.

Even worse – a small fluctuation in one corner can be felt throughout the tank in no time.

And by the way, the chances of your blue hippo tang contracting ich is dramatically amplified in cold temperatures, given that they’re already prone to this condition.

These fish grow big – over a foot long on average.

On top, they are notorious for their aggression and a knack for attacking others with razor-sharp spines.

Thus, they’re not suitable for smaller tanks of amateur hobbyists at any cost.