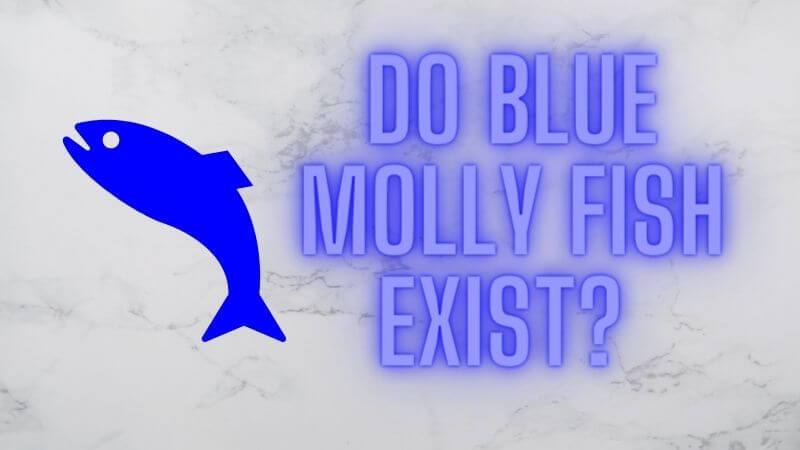 Mollies were first identified by naturalists in the 1820s. And in their 200-year-long history in the aquarium trade, they’ve been bred and morphed to come in a myriad of colors and shapes. But do blue mollies exist?

Oh, what a stunning sight it would be! Don’t you think?

Turns out blue mollies aren’t as common or readily available as we’d have preferred. Do they even exist in the first place? Or they’re just another figment of our imagination – wishful thinking?

At the time of writing this piece, proper blue mollies don’t exist. Breeders have produced varieties with blue specks or blue tails and fins, but an entirely blue molly from top to bottom hasn’t been bred yet.

However, during my research, I found that breeders and hobbyists alike are working quite hard to develop a strain that results in an entirely blue molly.

And while they aren’t successful yet, they’re slowly getting there.

For instance, let me summarize our friends’ experience of attempting to create blue mollies at Goliad Farms.

A Quest To Create Blue Mollies

In 1998, breeders at Goliad farms crossed a wild molly, Poecilia latipinna, from the San Antonio river with a male gold sailfin molly. To their surprise, the resultant fry had hints of turquoise on their bodies. So a few generations later, the breeders developed a strain and named it Santa Fe Turquoise.

The strain was wiped out by Hurricane Claudette in 2003, unfortunately. And in an effort to recreate them, the breeders used the same cross, and the resultant offspring were ‘euphemistically’ called Santa Fe Blue Sailfin Mollies.

Later, in yet another attempt to create blue mollies, the breeders worked with marble sailfin mollies with blue flanks. And a few generations later, a strain was developed and was even given a catchy name – blue marble sailfin.

But in their own words, the breeders were ‘disappointed’ with the results. There was too much black and too little blue.

In their third attempt at creating a blue molly, the breeders mated P. mexicana with blue marble mollies. And while offspring showed some promising results, the brains behind these fish weren’t happy with the result.

Here are the pictures, courtesy of Goliad Farms!

In my opinion, the takeaway point here would be to remember that fish can be heterozygous for specific traits like colors. This is even more true for rampantly bred and inbred livebearers like mollies.

Therefore, if the fry don’t come out looking like their parents, it’s not really an element of surprise.

Dalmatian Molly Care Guide | All That You Need To Know!

How Many Babies Do Mollies Have? Record-Breaking Number!

How Many Mollies In A 10-Gallon Tank? It’s Not Really Recommended!

I ferreted around a dozen different forums in my quest for any lead about blue molly fish. And here are some answers I was met with. Mind you, it’s a mixed bag!

“I might sound dumb, but I have never encountered mollies with any blue color to them. Although, I do have a dalmatian molly with a very blue tail!”

“I don’t believe there are any naturally blue mollies. If they exist by any chance, they’re most probably a dyed variety (an evil trade).”

“My sailfin mollies do have a hint of blue in their body. I am sure that someone who started with my fish can develop a blue molly in maybe 4 or 5 generations.”

“I just bred a molly with a blue hue to it. It’s just about an inch long right now. And I plan on breeding it as my attempt for a blue molly.”

And by the way, here’s a link to mama2916’s profile if you want to contact her about her blue mollies! But unfortunately, her last activity on the forum was in 2011. So, good luck!

Now that it’s clear that pure blue mollies don’t really exist yet let’s find out who tops the list of rarest molly fish in the hobby!

The Rarest Molly Fish In The World? Who Is It?

Since there are no documented cases of an entirely blue molly fish, it makes black mollies the rarest molly fish in the world, primarily bred in farms in Singapore.

Alongside, Mexican sailfin molly or short-finned molly are known to be extremely rare too. Part of the reason is that they’re incredibly hard to breed in aquariums.

How To Care For Blue Freckle Sailfin and Midnight Blue Sailfin?

Caring for blue freckle sailfin and midnight blue sailfin mollies is no different from caring for your regular sailfin mollies. They don’t really demand any special care in terms of environment or diet.

Here’s what the water parameters should look like for blue freckle sailfin and midnight blue sailfin mollies:

The most critical factor in ensuring the health and decent breeding rate in sailfin mollies is providing proper water that’s hard and alkaline. Since the water should also be high in carbonates, adding crushed coral or shell grits to the tank can also be helpful.

And as it goes without saying, perform plenty of water changes, install a filter that offers good circulation and current, and make a habit of removing leftover food as soon as they’re done eating.

Like the rest of the variants from the sailfin species, blue freckle sailfin and midnight blue sailfin mollies are slightly bigger than your average mollies. Therefore, the minimum recommended tank size for these fish is 30 gallons.

Like all sailfin varieties, these two are primarily algae-eaters. However, they also love snacking on small crustaceans, worms, and insects.

And if their tank’s algae supply doesn’t satiate their growth, they will also readily accept algae-based flake food. And a couple of times a week, give them meaty, frozen, or freeze-dried food like bloodworms, brine shrimp, or krill. Finally, of course, they’d also love to feast on small worms once in a while.

Unfortunately, a molly fish that’s a shade of blue from top to bottom doesn’t exist yet. However, there are variants with blue specks and bits in different body parts like the tail and fins.

From my research, I have found that breeders are hard at work to create a pure blue strain. So, there’s a good chance we will get to see and raise blue molly fish in the future soon!

How To Tell If A Molly Fish Is Dying? Look For These Signs!

How To Care For Pregnant Black Molly Fish?

Everything You Need To Know About Balloon Belly Molly