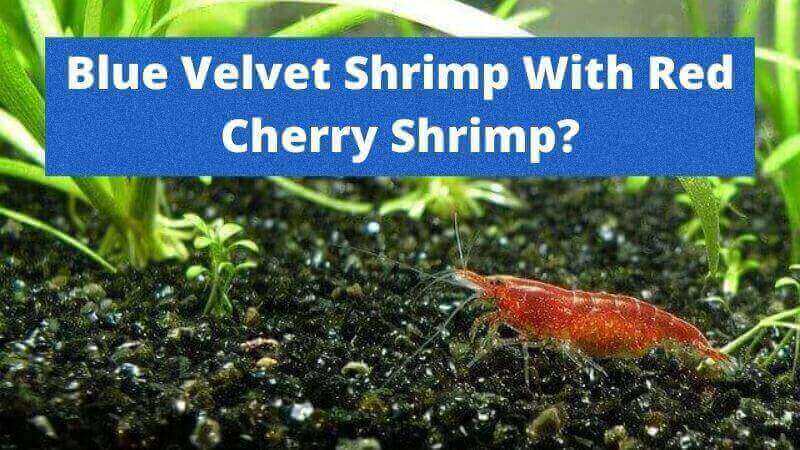 The first shrimp that I got for my community tank was a red cherry shrimp. I had hoped he’d take on the role of my janitor for my tank. And boy was he good at it!

So, when I found out these shrimps come in other bright colors – yellow, green, blue, orange – I was ecstatic. And thus began my affair with cherry shrimps.

In the beginning, there was a lot of confusion about their needs and compatibility. But over time, I’ve learned a thing or two that I’ll share with you today.

So, blue velvet shrimp with red cherry shrimp in the same tank – is it possible? Can they breed? If yes, what would the offspring look like?

Keep reading, and you will find your answers.

Can You Keep Blue Velvet Shrimp With Red Cherry Shrimp?

Yes, absolutely. Blue velvet shrimp and red cherry shrimp can perfectly cohabitate together. Besides color, they basically have the same characteristics and requirements. And that’s because both these shrimps come from the same family – Neocaridina davidi species!

Both shrimps are actually color morphs of the original greenish-brown shrimps found in Taiwan’s freshwater sources. However, multiple generations of selective breeding have led to various colors and patterns we all adore today.

Other than blue and red, there are several other morph versions. They aren’t as popular as red cherry shrimps. Still, they more than make up for it with their unique colors and ferocious appetite for algae.

Let’s have a look at all of them at a glance.

Since all of these shrimps have more or less the exact requirements, you can keep any combination in the tank.

But whether they breed or not is a different question.

Yes, blue velvet shrimps can mate with red cherry shrimps since they belong to the same family. The only primary difference between them is the color. So, interbreeding is quite common between these shrimps.

And just like with cohabitation, all shrimps mentioned above from the Neocaridina davidi family can interbreed and produce uniquely colored offspring.

In most cases, blue velvet and red cherry shrimp’s offspring will have greenish-brown color – the natural shade found in the wild. I dug through several forums, and this is the most commonly resulted color mentioned on all platforms.

However, there are a few anomalies too. For example, some reported that the offspring were either the shade of blue or red.

It’s actually quite challenging to isolate the genes responsible for the blue color morph compared to red and orange morphs. So, chances of getting a blue-hued baby shrimp are pretty slim.

One user who bred blue velvets with painted fire red cherry shrimps had exciting results. All of their babies have red heads and tails with blue middles.

Another user on Fishlore mentioned that some came out almost gold.

If you’re determined to produce some outlandish color, there’s a good chance selective breeding/culling would create some interesting results.

The fry’s color and intensity of color could also depend on the parents’ color. So, it’s essential to know the color grade of your blue velvet and red cherry shrimps.

Let’s have a quick look at color grades for both kinds.

The most color grade in the Neocaridina davidi family belongs to blue velvet shrimps. On top of that, they have several different names like blue fairy, blue velvet, blue jelly, blue dream and so on.

These names are often used varyingly in relation to the shrimp’s color intensity.

They have a comparatively low degree of blue shade, which appears only as translucent spots in some parts of the body. Thus, the body is actually more black than blue. Also, there are large black spots on the head.

These shrimps have a mix of translucent and opaque blue shades in the body. Once again, there are black head spots.

These shrimps rank in the second-highest grade. The black spots on the head are a lot more faded comparatively. The body is entirely blue and opaque.

Shrimps belonging to this category are the most popular and sought after. They have completely opaque bodies in rich blue color. There are no translucent or black spots.

Richer the color, higher will be the classification.

Specimens of the cherry grade actually have a translucent body with sparse pinkish-red spots. Usually, the abdominal and the carapace area have a faint tint of red, but the legs are always transparent.

Sakura grade shrimps have a comparatively more intense shade of red than cherry shrimp. However, the hues are somewhat blotchy – especially the bottom part. The abdomen and carapace are red, but the legs are transparent.

Shrimps from this category have a lot more reddish opaque hues than regular shakuras. In addition, these shrimps have blotchy red legs. The redness in the body is intense, but the shell still has orange tints.

As the moniker suggests, these shrimps have intense red bodies that are almost entirely opaque. The saddle and eggs, which are easily visible in the lower grade shrimps, cannot be seen in these shrimps. The legs don’t have blotchy spots either.

Shrimps belonging to this category have earned the name because they almost look like they were painted red. The body is completely opaque and can easily be seen on all kinds of substrate. Also, the saddle and eggs aren’t visible until you shine a very bright backlight.

These shrimps were only created recently with the help of intense selective breeding. The shrimp’s body is almost similar to painted fire shrimps, but there’s a semi-translucent carapace. The legs, too, sport intense red colors.

The answer to Blue Velvet Shrimp With Red Cherry Shrimp mix and their potential babies is clear. Now, let’s check out the nitty-gritty of keeping these shrimps together.

Let’s begin with the group dynamics. According to color theory, red signifies power and heat, while blue points to peace and depth. So, do colors have anything to do with their personalities?

The color has nothing to do with personality. The behavior and group dynamics of the shrimps from the Neocaridina davidi family are the same irrespective of their color. Both blue velvet and red cherry shrimps are known to be docile and non-aggressive.

In a community tank, these shrimps will seldom interact with fish or other creatures. These bottom-dwellers usually keep to themselves and only occasionally interact with other shrimps.

If the tank is overpopulated and polluted, the shrimps may show their hostile side – but that’s the case with almost all creatures.

If you keep them in a big community tank, there’s a good chance they’ll create a social colony and move in groups to scavenge. They also have a pecking order.

During the daytime, they usually prefer hiding in caverns and plants at the tank’s base. They’re even known to share the same hideouts.

In my experience, blue velvet shrimps tend to hide a bit more than red cherry shrimps.

Nonetheless, both shrimps love to come out at night and scrounge the bottom to forage. Thus, your shrimp tank should always be well-planted.

My shrimps love Java Moss, which isn’t just a source of food for them but also a spongy bed to relax on.

A well-planted tank will almost always have something to nibble on for your shrimps. However, besides plants and biofilms, you also need to fortify their diet with other food types.

Most food good for fish is suitable for your shrimp. Whether it’s flakes, pellets, or frozen food, they’ll readily munch on. But you need to make sure they don’t have copper in them, which is toxic for shrimps.

The best tank mates for blue velvet and red cherry shrimp are:

Tank mates you should avoid:

In their natural state, Taiwanese freshwater bodies, these shrimps live with cyprinids, loaches, and catfish. Given their docile nature, these shrimps could have done well in any tank if they weren’t in the bottom tier of the food chain.

Yes, blue velvet and red cherry shrimps can perfectly live together in the same tank. After all, both of them belong to the same species – Neocaridina davidi.

They won’t just peacefully cohabitate but even breed and produce healthy offspring. However, if you are expecting the offspring to have crazy colors, there’s bad news.

In most cases, these shrimps will produce greenish-brown fry. However, as you read above – there could be some outlandish anomalies like red & blue mix and even gold!