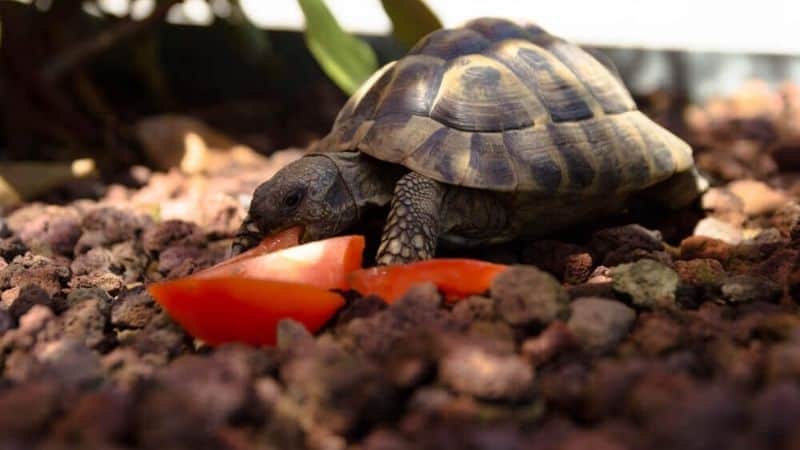 Botanically, tomato is a fruit, but the majority of nutritionists prefer calling it a vegetable. We know captive turtles should have plenty of greens and veggies. But did you know that you’ve to be a little careful while giving fruits? So, how does this fruit-vegetable fare? Let’s find out!

Can A Turtle Eat Tomatoes?

Yes, turtles can definitely eat tomatoes occasionally. However, it should only be given in moderation because turtles love to binge on fruits. It’s rich in nutrients beneficial for reptilian health. However, overfeeding tomatoes can also lead to sugar spikes in blood levels, disturbed metabolism, and upset stomach.

Can A Turtle Eat Cherry Tomatoes?

Yes, a turtle can eat cherry tomatoes just like they eat regular tomatoes – within reasonable limits. However, cherry tomatoes have an even higher concentration of sugar than normal ones. So, you should stick to giving in once in a blue moon if you need to.

Can A Turtle Eat Grape Tomatoes?

Grape tomatoes have less sugar content than cherry tomatoes. They’re also meatier and contain less water. Your turtle will definitely enjoy grape tomatoes. But once again, you should only limit it as an occasional treat.

Can A Turtle Eat Tomato Leaves?

Ideally, no. Tomato leaves contain toxins called alkaloids, which can have adverse negative effects on a turtle’s health. But don’t panic yet. If your turtle nibbled on a leaf or two accidentally, there’s no need to worry – he’ll be perfectly fine.

However, let’s suppose your turtle’s been foraging in your backyard’s tomato vines for a good part of the day. If you suspect he’s eaten multiple leaves, you should definitely ring up the vet and seek his advice.

How To Feed Your Turtle Tomatoes?

Turtles don’t have teeth and don’t produce saliva. That’s why they have a hard time swallowing big chunks of foods. Cut the tomato into bite-size pieces before giving it to your pet.

But make sure you don’t chop it too fine – it will get runny, making it harder for your turtle to eat.

Like all things in life, tomatoes can lend great health benefits to your turtle when given in moderation. I usually give mine once or twice a month as a treat.

Let’s study the nutrition facts of tomatoes and what it means for a turtle.

As for vitamins and minerals, tomatoes are loaded with these essential nutrients. A single, raw tomato contains ample amounts of Vitamin C, Vitamin K1, Vitamin A, Folate, and Potassium.

For us, tomatoes scream health and nutrition. But what about turtles? Does it offer them any value? Let’s find out!

Health Benefits Of Tomatoes For Turtles

When given in limited quantities, the nutrients present in tomatoes can offer an array of benefits. From boosting immunity and preventing infections to regulating metabolism and improving heart health, tomatoes can make great, nourishing treats for turtles.

Good Source Of Vitamin A

Tomatoes contain high-powered beta-carotene antioxidants, which are converted into Vitamin A when consumed. And in turtles, vitamin A helps keep the eye and respiratory health in check, among others.

In turtles, vitamin C helps to fight infections and boost immunity due to its potent antioxidant properties. Vitamin C is also vital to facilitate iron absorption.

Tomatoes make fibrous fruits, which help to regulate the metabolism in turtles. A fibrous diet is especially important if your turtle’s preparing for hibernation. Thus, tomatoes can make great fiber supplements.

Besides the nutrients mentioned above, tomatoes have good traces of enzymes, potassium, folate, and vitamin B6 that boost cardiovascular functions in turtles.

Why Are Turtles Slow? Are Box Turtles The Slowest Turtles Ever?

Six Things To Consider When Giving Your Turtle Tomatoes

Unfortunately, tomatoes aren’t free of vices. There are few things you need to be careful about while giving your pet turtle tomatoes. Usually, most tomatoes available commercially are high on pesticides. Make sure you buy organic ones. Likewise, if overfed, it can lead to obesity, kidney complications, and imbalanced metabolism.

Tomatoes come with a few caveats. It is high in fructose – a sugar compound known to spike cholesterol levels in reptiles. It can also cause insulin resistance. And eventually, this contributes to your turtle’s weight gain, which in turn can unlock the door for many other health complications.

Could Lead To Obesity

Building on the above point, turtles that have developed a taste for fruits are often obese. And since tomatoes can spike cholesterol and lead to insulin resistance, it can make your turtle unnecessarily fat. As a result, he will be more lethargic than usual – causing his body metabolism to drop significantly.

Can Deviate From Healthy Diet

If a turtle is fed fruits like tomatoes regularly, he will undoubtedly acquire a sweet tooth (pun intended) and discard other food. I made this mistake with my first turtle. I thought fruits are super healthy for turtles and fed them multiple times. Consequently, my pet became very picky with his greens and veggies.

And by now, you know that high levels of sugar found in fruits aren’t necessarily good for turtles.

Not Everyone’s Cup Of Tea

Turtles hailing from the Medeterrian often don’t have access to fruits in their natural habitat. That’s why their digestive tracts aren’t well suited to digest large amounts of sugar present in fruits. Thus, this can lead to indigestion and other complications.

Always make sure to do a bit of research on what the diet pattern is like in your pet’s native place.

Tomatoes are super rich in vitamin C. However, few other unwanted acids tag along too. Besides causing an upset stomach, several studies have shown that consistent consumption of acid-forming foods causes mineral bone loss and hamper kidney functions.

Sadly, tomatoes often make appearances in the infamous Dirty Dozen food list due to their high pesticide content. According to the Environment Working Group, traces of four different pesticides were found in a regular tomato. One sample contained over 15 different pesticide residues.

No doubt, these chemicals can have adverse impacts on your turtle’s health. Some side effects are palpable over a short period – prompting medical help. But it’s well known that a turtle’s body can retain pesticides for several years. Thus, some side effects may go unnoticed – slowly harming your turtle year after year.

I hope the answer to can a turtle eat tomatoes is clear. So, before you go, have a quick look at other healthy and tasty food options for your pet turtle.

What Can A Turtle Eat?

Since turtles are omnivores, they enjoy a broad palate – ranging from live feeder fish to exotic aquatic plants. They can eat varieties of veggies and fruits like kale, peas, beet, squash, grapes, mango, papaya, and kiwi.

Conclusion On Can A Turtle Eat Tomatoes

Yes, turtles can eat tomatoes, which are super rich in antioxidants and vitamins that benefit health.

However, if often fed, your turtle may develop a taste for sweet, tangy food and stop eating other relatively blander food. Like with all food, there are a few caveats attached to tomatoes as well.

That being said, as long as you feed in moderation, your turtle should be absolutely fine!