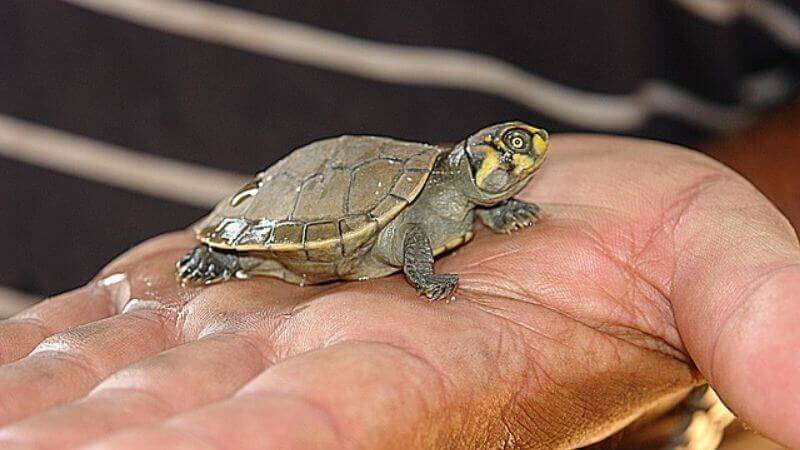 Turtles never cease to amaze. A recent DNA hypothesis suggested that turtles come from a sister group of archosaurs – a group belonging to dinosaurs. The latter vanished from the face of the earth 65 million years ago – but turtles continue to exist gracefully as ever. They’ve overcome 5 mass extinctions, but can a turtle live without a shell?

A turtle’s shell is supremely different from the bony covering of other shelled animals like an armadillo or anguid lizard.

Keep reading, and you will find your answer.

Can A Turtle Live Without A Shell?

The shell is built right into the structure of the turtle’s body. It doesn’t molt, doesn’t shed, or come off quickly. Also, the shell is never too big or small. It grows at the same rate the turtle grows.

Quite fascinating, right? It is indeed! The science behind turtle’s shell has perplexed scientists for decades and continues to do so.

But do you know turtles didn’t always carry their homes? Yes. Turns out that turtles without shells existed at some point in time.

How Long Does It Take For Painted Turtle Eggs To Hatch?

Do Turtles Without Shells Exist?

No, turtles without shells do not exist today nor have lived in a long, long time. But researchers have discovered that around 228 million years ago, turtles didn’t have shells.

A team of scientists from National Museums Scotland found a shell-less turtle fossil in China that’s bigger than a double bed! . The frisbee-shaped, six-feet-long, toothless fossil was identified as an ancient turtle. There were traces of wide ribs and a very characteristic beak.

So far, we don’t exactly know when or how the turtle shells evolved. But with the help of breakthrough discoveries like the one above, we are getting closer to the truth than ever.

When Did Modern Turtles Appear?

It is believed that the modern turtles first made an appearance during the late Triassic period (237-201 million years ago) with the species Proganochelys. This species of turtles had both plastron and carapace.

Today, we have 356 known species of turtles.

How Long Can A Turtle Live Without Its Shell?

A turtle could be alive for anywhere between a few minutes to a few hours without its shell. After that, irrespective of the duration, the reptile will surely die. But due to slow metabolism, a turtle can live in agonizing pain for several days or weeks even if its shell is crushed or badly injured.

So, next time you see an injured turtle, make sure you take action!

Unfortunately, sightings of injured turtles on the road are incredibly common around springtime when they cross the road.

A turtle’s shell can be broadly divided into two parts: carapace and plastron. Carapace refers to the top part of the shell, while plastron is the bottom part. Essentially, the turtle’s shell is composed of ribs that have flattened out, joined the skin, and fused into the bony plates.

Now, let’s have an albeit more detailed look.

Carapace refers to the upper part of the shell that covers the turtle’s back. It is made up of flattened ribs which have fused together alongside other parts of the backbone. Likewise, it is covered by an outer layer of singular pieces called scutes. Scutes are made up of keratin, just like our nails and hair.

The carapace is the organ that gives a shell its iconic dome shape. And since the spinal column and rib cage are built into the carapace, it is naturally a vital organ in turtles.

A carapace is covered with scutes, a layer of keratin that protects the carapace from injuries. The method of calculating age by counting scute rings is quite popular among turtle keepers.

The plastron is the bottom part of the turtle’s shell that covers its belly. It is made up of nine bones and two epiplastras. With few curvy exceptions, most turtles have a flat plastron. Plastron’s emergence has remained a mystery so far. But a mildly accepted theory by French zoologist Georges Cuvier suggests that it developed from the turtle’s sternum.

Plastron serves a critical function in turtles by protecting the heart, lungs, and other internal organs.

Carapace Or Plastron: Which Came First?

Researches have shown that turtles without shells roamed the earth millions of years ago. But when they finally developed the shell, did they simultaneously develop all of its parts, or was it a gradual process? Let’s find out.

Fossils of one of the oldest known turtles dating back 220 million years, Odontochelys semitestacae, only has a plastron, the bottom part of the shell. Thus, it’s believed that plastron developed first, and carapace came to the scene later.

Now that you know whether or not a turtle can live without a shell, let’s dissect all the reasons in detail.

6 Reasons Why Turtles Cannot Live Without Their Shell

Turtles have evolved to have dark carapaces for an important reason. It helps them absorb heat into their body. On the flip side, the plastron is usually of a lighter color.

As ectotherms, turtles do not produce their own heat. They have to rely on the external temperature. And that’s where a dark carapace comes into play. They are excellent facilitators of heat absorption.

The carapace has another equally important function – preventing turtles from dehydrating. If it weren’t for this organ, the turtle’s internal organs would dehydrate from sunlight long before the reptile could garner enough heat to run its body.

In the wild, only the survival of the fittest is ensured. Some have evolved to have lightning-fast reflexes, some change color, and some secrete pungent smells. Turtles? They just hide in their shells.

A shell is a turtle’s home in the best possible way – it’s their safety net. Whenever a turtle senses danger, they hide inside their shell. After all, a turtle shell can withstand 200 times its own weight.

However, not all species can equally hide inside their shells. Most terrestrial and semi-aquatic species can fully bring their plastron and carapace together to enclose all body parts like the head, limbs, and tail. But most freshwater turtles can only hide partially.

Nonetheless, this bony shell has been a turtle’s refuge against predators and environmental calamities for millions of years.

There’s a unique evolutionary theory behind this. A turtle’s shell naturally evolved to compensate for the earlier anatomical changes.

For instance, ancient turtles had to have good digging skills to protect their eggs. And while their ribs broadened and flattened over time to add stability and strength to their forelimbs, it seriously impacted their locomotive skills.

As a result, over time, their rib anatomy evolved to become armored shells to protect them. Interesting, right?

As you already know, a turtle’s shell isn’t just another bony covering. It is a core part of their skeleton system. The rib cage is fused with the carapace, whereas the spine is fused directly into the shell’s underside.

Likewise, the plastron is made up of unique bones comparable to clavicles and sternums of animals with four limbs. And the shoulder blade is positioned within the rib cage.

So, you get the point, right? A turtle’s shell doesn’t just house several internal organs but is literally fused with them.

And just like their bones, calcium deficiency also hinders and deforms the development of the shell.

If a turtle’s shell was removed, you would also be removing parts of its spine, ribcage, and about 50 bones.

A turtle’s shell is also its skin. Okay, sorry, it might be confusing because I just said it’s just their skeletal system, but hear me out!

If it weren’t for the skin, the nerve endings of the shell and the sensitive dermal plates would be exposed to pathogens, predators, elements, and whatnot!

In simple words, turtles need UV lights to stay healthy. It helps to process calcium in their bodies and convert vitamin D into Vitamin D3.

And their shell plays a pivotal role in the absorption of UV lights since it also acts as their skin. If it wasn’t for the shell, a turtle’s body would not have enough surface area to absorb the levels of UV light it needs.

As a result, a turtle would suffer from fatal diseases like metabolic bone disease.

The shells also store magnesium and potassium, allowing turtles to stay underwater for a longer time.

Can A Turtle Live With A Broken Shell?

Fortunately, yes. A turtle can live for several days or even weeks with a broken shell, depending on the severity. It is possible due to their slow metabolism. There have been several cases where turtles hit by motorists have had successful treatments even after some time has passed.

However, you should always seek medical advice for your pet turtle if it has sustained a shell injury. Although they won’t die immediately, a shell injury can inflict serious internal wounds that can impair a turtle for a lifetime.

If the injury is severe, you should never treat the shell injury yourself at home. I strictly advise against it. You need to seek medical assistance at the soonest.

That’s because even when the shell injury doesn’t look too bad, the internal organs may have been impacted.

Can A Turtle Come Out Of Its Shell?

Are Turtles Born With Shells?

Absolutely! A turtle is born with a shell that perfectly fits its body. As the turtle grows, the shell also grows. Hence, a turtle’s body always perfectly fits inside the shell. It’s never too big or small.

Does Turtle Shell Grow Back?

A turtle’s shell doesn’t completely grow back. A broken shell will heal, but it will still be a bit deformed based on the extent of the injury. However, if a turtle’s shell is completely removed from its body, there is no chance of survival.

But can a turtle shell heal by itself? Yes, it’s possible. Since a shell is made up of living materials like bone, nerves, membranes, and keratin, it possesses the ability to heal. It is often the case in the wild. If you inspect a wild turtle’s shell, you will notice scratches, dents, and scars that have remained after healing.

However, it doesn’t mean you should leave your pet to its own devices when its shell is damaged.

Do Turtles Die If Their Shell Cracks?

A turtle won’t die immediately if its shell gets cracked owing to its slow metabolism. However, if left untreated, it may hamper the turtle’s internal organs and basking abilities, both of which are downright fatal for a turtle.

That being said, if the shell crack is very severe in nature, the turtle may die.

Final Words: Can A Turtle Live Without A Shell?

No, absolutely not. Turtles cannot live without their shells. Although ancient turtles without shells roamed the planet some 228 million years ago, modern turtles are wholly fused with their shells.

For them, it isn’t just a bony exterior that protects them. It is an indispensable part of their body connected with other equally vital organs like ribs and the spine. Essentially, it’s a part of their skeleton system, skin, and a protective shield for internal organs.