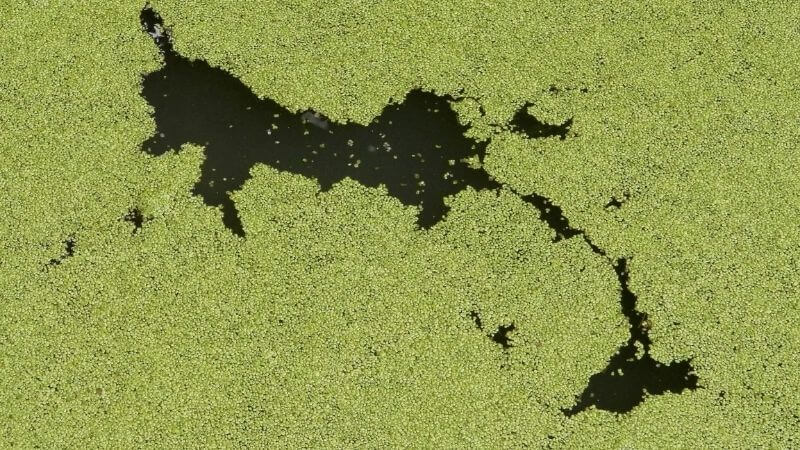 Can Algae Eaters Live With Turtle?

Omnivore turtles love to eat just about anything. It’s not a good idea to put other living beings in a turtle tank. To answer can algae eaters live with turtles, some owners have reported success with Plecos, Florida flag fish, Otocinclus, and Chinese algae eaters.

However, you should know that no algae eater can be the perfect solution for your algae woes. There’s also no guarantee of how long it will survive in the tank with a turtle. I dug through dozens of forums, and the experiences shared there are mixed bags.

Nonetheless, the aforementioned species seem to be the favorites among turtle owners.

So let’s have a more in-depth look at them—shall we?

Plecos top the charts in all turtle forums. However, many species of these hardy algae eaters and their efficiency at eating algae in turtle tanks differ largely. While Bristlenose and Common Pleco is also used, Clown Plecos seem to be the favorite for their petite, elusive size.

Clown Plecos are relatively small—reaching 3-5 inches in size at most. On top of that, they are quite shy and easily disappear within the tank. Thus, a turtle can seldom reach and gobble up these mysterious creatures.

You can also add a small decoration as a home for Clown Plecos, where it can rest and sleep. Ensure the decoration is small enough for a turtle not to poke his head in.

Chinese algae eaters make a popular choice for a turtle tank because of their fast reflexes. They can dart very quickly when spooked—thus, escaping a turtle’s carnivore instincts easily. Chinese algae eaters can grow up to 11 inches, but they usually clock in at 4-6 inches in the aquarium.

Young Chinese algae eaters are excellent algae eaters comparatively. Irrespective of age, all of them boast of being skittish and fast—increasing their survival rate in a turtle tank.

Older Chinese algae eaters are known to eat the slime coating off other slow-moving fish. Thus, there’s a good chance that they’ll try to eat the buildups in a turtle’s shell as well.

Also known as American flag fish, these Florida natives are notorious for eating filamentous algae. Since Florida flag fish are very active and fast, they can escape a turtle’s rather slow attacks easily. In most cases, a turtle will have a hard time catching these fish—making them suitable candidates for a turtle tank.

A male Florida flag fish can grow up to 3 inches, while a smaller one is slightly smaller. The small size gives them added benefits of better camouflaging and swift reflexes.

However, since these fish don’t have a “sucker mouth,” don’t expect them to hoover the green films off the tank’s surface.

Some turtle owners swear by these South American sucker-mouthed catfish for their small size. Otocinclus are best known for their ability to suck off algae from even the smallest surfaces like leaves. However, they’re reasonably passive and require a lot of hiding places to stay safe.

If you want to add Otocinclus in the tank, you will need to add several covers like plants and decorations to hide better. Otherwise, they’re not best known to be wary and can easily be eaten by aggressive turtles.

In my experience, ghost shrimp are one of the most hardworking algae-eating species. These translucent scavengers eat most kinds of algae and diatoms. Since they’re also quite good at evading the turtles with their quick moves, ghost shrimp are quite popular among turtle keepers.

However, you can give your ghost shrimp an advantage over turtles by adding quite a few live or artificial plants to hide in.

How To Introduce An Algae Eater In A Turtle Tank?

No matter how hardy or agile an algae eater may be, there’s always the looming risk of being eaten up by the turtle. When introducing an algae eater, make sure that there’s enough room in the tank. Also, feed the turtle right after introducing the new member.

Here’s a more in-depth look into the factors you need to consider:

When you add a new member to the tank, turtles can get territorial and aggressive quickly. Hence, it is important to make sure that the tank is spacious enough to easily fit both of them.

The most commonly recommended size for pet turtles is a five-foot-long tank at a volume of 80 gallons.

If the turtle is hungry when you add the algae eater, there’s a good chance that the turtle will perceive it as food. Thus, always make sure to feed your turtle right after introducing a new tank mate.

That way, your turtle will also have a better temperament and will be less shocked by the addition of a new member.

We know algae doesn’t wait until the turtle is older to bloom, but the chance of your algae eater’s survival is high if the turtle is relatively old. It’s an important point to consider. As turtles age, their inclination lies towards plants and vegetables.

As a result, the survival rate of algae eaters is much high in tanks with older turtles.

Include Hiding Spaces in the Tank

Answering can algae eaters live with turtles depends largely on hiding places available in the tank. Irrespective of the speed and reflexes, all algae eaters need plenty of hiding spots to survive in a turtle tank.

When alive, algae eaters may easily allude to a turtle’s predatory moves, but they can easily be caught off-guard when sleeping or resting.

Therefore, you need to add decorations like live or artificial plants, rocks and driftwoods, and small caves. You need to make sure that the driftwoods are aquarium safe and other decorations don’t have sharp and rough edges to them.

Once you introduce the algae eater to the tank, it’s crucial to observe the interaction closely—at least during the first few days. If you feel that the turtle is disturbed or angered by the recent change, you may have to take out the algae eater.

If the turtle is bothered by the presence, it will usually swim up to the new creature and try to nip at it. If that’s the case, you should immediately remove the algae eater and find a safe place for it.

By now, you probably know that the stakes are high with algae eaters in the turtle tank. Thus, it’s best to resort to other cleaning methods. Even more, it’s essential to know the cause behind algae to prevent future breakouts.

Why Is There Algae In My Turtle Tank?

A turtle’s tank is especially prone to algae outbreaks because its waste serves as the essential nutrients for the algae. The water’s quality and the tank’s lighting are the other two factors that promote algae growth in the turtle tank.

Since turtles prefer defecating in water, the tank’s water can get quickly polluted within few days.

The waste they produce can be a vital source for algae because it contains all the nutrients required to stimulate algae growth.

Thus, you need to make sure that the tank’s size is generously big. The rule of thumb is 10 gallons of water per inch of turtle. In a small tank, the waste gets concentrated easily—creating the perfect recipe for algae.

Likewise, you also need to ensure a robust filtration system that can keep the water clear and clean for most parts without manual intervention.

While choosing a filter, you should usually go for a canister-type filter that’s rated three to four times the size of your real turtle tank.

Here’s one I love by Penn-Plax. I love the 360-degree rotational valve system. It just eliminates the problem of putting the filter in a spot that’s not in the way but can still easily reach the tank. I’d definitely recommend it.

If your turtle tank contains excessive nitrate levels, it will profusely contribute to algae growth. That’s because nitrate is the primary source of food for algae.

And as the algae dies and decomposes, high levels of organic matter deplete the water of oxygen—causing a severe impact on a turtle’s health.

Thus, once again, the point boils down to having a robust filtration mechanism and cleaning routine.

Light is essential for a turtle’s development and health. But too much light in the tank can backfire in unprecedented ways.

The lights should only one on for about 12 hours a day. Anything more than that will stress out your turtle, besides creating a favorable environment for algae growth.

If the tank is receiving direct sunlight throughout the day, moving it out of the light can significantly eliminate the algae.

Conclusion On Can Algae Eaters Live With Turtles

Turtles are omnivorous creatures, which means they love to nibble on everything from live fish and worms to plants and veggies.

Adding an algae eater in a turtle tank is quite tricky because there’s no guarantee that your turtle won’t eat it up.

Nonetheless, some algae-eating species have a better survival rate in a turtle tank due to various reasons like the small size and fast reflexes.

Clown Pleco, Chinese algae eater, Otocinclus, and Florida flag fish are reported to get rid of the algae in the tank quite effectively while also coping and hiding better from a turtle.

Can Turtles Get Fat? How To Help Your Turtle Lose Weight?