Can Betta Fish and Turtles Live Together in the Same Tank? – Tips on keeping betta and turtle together. 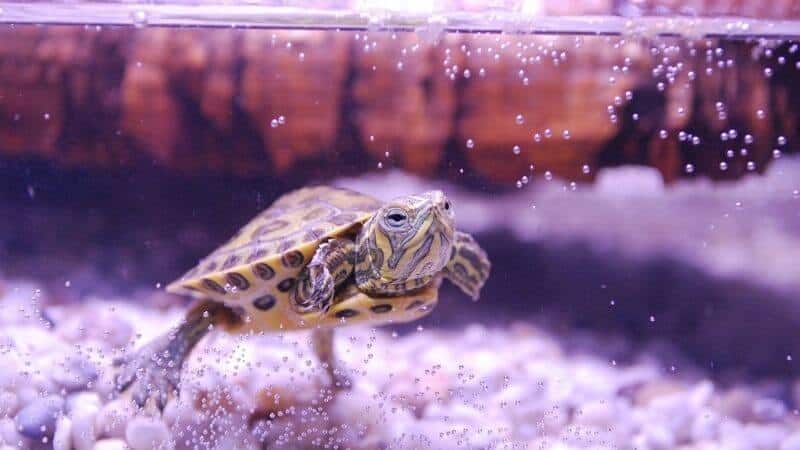 Yes, betta fish and turtles can live together in the same tank, but you need to look into a lot of things before putting them together. Having gallons of water for each of them with an excellent hiding place for a betta is one of the challenges you have to take before thinking of putting them together. So, can betta fish and turtles live together in the same tank?

Yes, they can if you are knowledgeable enough to create a cohabitating environment.

Get a bigger tank

Your usual tank size might be enough for bettas; however, you need a larger aquarium for a turtle. You need to know how big your turtle can get when matured. If you want a cohabiting environment then, look for at least a 40-gallon tank. A baby turtle typically requires 20 gallons, so you will have considerable space for both bettas and turtle if you get a 40-gallon tank.

While getting a tank, make sure you get a more extended tank (more width than depth). Turtles prefer longer tanks.

Be mindful of their territories.

Turtles can get aggressive when there is little space in their habitat. Mostly males are much more aggressive than female turtles.

In general, Bettas are slow (not slower than turtles) and like to meander everywhere in the tank. Several times in a day, they might reach the vicinity of the turtle. This can make the turtle aggressive, and he might bite your betta in most scenarios.

So, How can you protect your betta from your turtle?

The curious nature of betta can lead them to turtle’s territory, and turtles sure mind that. This will result in bite marks on your bettas head and fins.

If you aren’t on a tight budget, you can buy another tank for your fish or turtle. However, the aquarium setup can get expensive with filters, gravels, plants, decorations, and several other requirements.

Just because your turtle and bettas aren’t compatible in the same tank doesn’t mean you have to get a new tank mandatorily. That’s why there are Net Separators.

It’s the bettas that need protection from the turtles. Even though turtles are generally vegetarians, but they attack everything, especially something smaller than them in size. Bettas can be prone to a turtle’s attack; thus, it will require a hiding place to rest and be safe from turtles.

Plants, both natural and artificial, give betta hiding and resting place when a turtle chases them. But I recommend you to separate them if your turtle keeps on chasing betta. You surely don’t want a frightened fish in your tank.

Be patient with cohabitation.

You need to be patient with your aquatics as they will be new to each other and might be curious. Generally, turtles do attack bettas as they don’t see them as beautiful colored fishes as we humans do. It is in turtle’s innate nature to attack small fishes and insects if they encroach their territory. Bettas, too, are similar to tiny insects. Just be patient and have them under careful watch to know how they react in the presence of one other.

Other alternatives Fish Mates for Bettas

If you are a betta guy, then there are other fish mates your betta can live happily with.

There are certain things to consider before putting any fishes together with bettas.

You don’t want a nibbling face to harass your betta. If the offender is the same size as bettas, then bettas will give a hell of a bite back.

Size of the Tank

You need to have at least 5 gallons of water only for your betta. This will be enough for him to thrive in an aquarium.

Put some plants and ornaments.

Bettas can be intimidated by fishes larger than them. This includes turtles too. Plants, whether they might be natural or artificial, will give your bettas a resting and hiding place from other tank mates. The same is the reason for placing ornaments in the tank.

Now, let’s move unto which fish mates can cohabit with bettas in the same aquarium.

While they look like an eel, these fish grow up to 3.5 inches long. They scavenge what’s left off by the betta. They are nocturnal fishes, making them a safe tank mate as they won’t be feeding during the feeding time of betta.

Ember tetras don’t get bigger than 1 inch, so it avoids the worry of intimidating bettas. When keeping them, but at least six of them together in a fish tank so that betta won’t single out a single ember when curious. When in school, they will be safe from bettas.

These bright colored fishes will lighten up your fish tank, and everyone will be admiring your fish tank when they display their full color. By the way, they eat the same food as bettas.

Just like Kuhli loaches, these Malaysian trumpet snails are nocturnal too. This means there will be a shift in feeding time inside your tank. In the daytime, they will be dwelling under the substrate. This will let your bettas roam freely during their feeding time and create harmony in the tank.

The 2 inches long fish is one of the social fish to bettas. They are good at being out of betta’s way during feeding time. Generally calm, these fish needs a school of at least six in number to be safe from bettas if your betta gets curious.

Of course, your bettas won’t be able to catch them even if they tried so; they sure do give a healthy amount of exercise to your bettas.

Final thoughts on Can betta fish and turtles live together in the same tank?

A serious effort is required to keep both betta and turtle together in harmony inside your fish tank. The use of net separators can be your best choice if you do not like to see harm getting in your betta’s way. Happy fishkeeping!