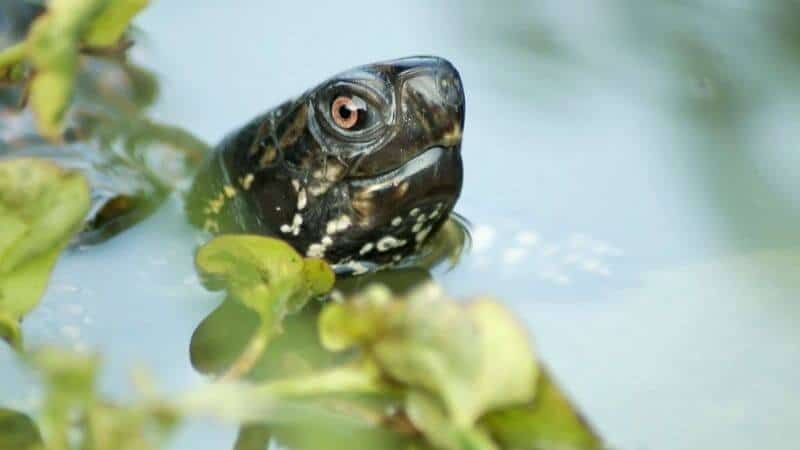 Box turtles are terrestrial beings that love spending time on the land. On top of that, there are 4 known species of box turtles. So, answering can box turtles swim will be a bit longer than what we’d hoped for.

But if you’re looking for a quick answer…

Here’s a short video of a box turtle swimming in a tank.

Now, let’s dig a bit deeper and see how each species of box turtles fare.

Eastern box turtles live around the meadows, ponds, fields, and woodlands across the eastern United States. They are well-known for swimming in shallow waters of ponds, puddles, and streams during the hot season.

But if the water is too deep for their liking, eastern box turtles can easily drown.

Florida box turtles actually just like to sit in the water and not necessarily swim.

Found in the southern states across the US, three-toed box turtles aren’t quite adept at swimming. For them, the water should only be deep enough to reach the top of the legs—nothing deeper than that.

Despite being not-so-great swimmers, three-toed box turtles love to soak in water for more extended periods than other subspecies.

In the wild, they often travel to shallow waters for a nice swim.

Can All Turtles Swim?

Do Box Turtles Live in Water?

The terrestrial box turtles don’t live in water. They live by shallow water bodies like marsh, streams, and creeks. They actually prefer to stay in the land more, where they can dig and forage all day.

We have already established that box turtles are very much average when it comes to swimming.

How Long Can Box Turtles Swim?

Since box turtles aren’t aquatic creatures, they can’t swim for longer periods. In the wild, box turtles often swim to reach somewhere. For instance, they can easily cross a creek or two. That’s also the reason box turtles always swim on the surface.

I explored some forums and came across some owners sharing their turtle can excellent’ swimmers that can quite easily complete a few laps.

But I guess the answer to can box turtles swim or not and how long differs from turtle to turtle and their living experience.

From what I have seen and known, box turtles always swim on the surface. Most of the time, box turtles swimming in deep water end up drowning and getting to the bottom. Now how long can they live underwater is another topic to discuss.

In the wild, box turtles may sometimes swim a bit deeper to escape predators. Now they may be quite good at it if they do it often. But the same can’t be said for a pet box turtle.

How Long Can a Box Turtle Stay Underwater?

That being said, you, of course, don’t want to take chances. Be vigilant the whole time and keep an eye out for any sign of danger if you take your box turtle swimming.

How Do Box Turtles Breathe Underwater?

Like other members of its subspecies, box turtles lack gills. So, they can’t really breathe underwater. While swimming, they’ll often have come to the top to take in some air.

But since box turtles swim at the top, they can quickly gasp for air.

Box turtles do have a small orifice at the back of their body called cloaca that facilitates breathing.

However, their cloaca isn’t quite evolved at supporting underwater breathing as it’s for some other species.

Can a Box Turtle Drown?

Yes, a box turtle can drown quite easily. Actually, there’s a better chance of a box turtle drowning instead of swimming in anything other than shallow water.

Now even though they can breathe for a few minutes underwater, the result of sinking and drowning is almost always fatal.

How Much Water Do Box Turtles Need?

Box turtles are usually 4-7 inches tall. So, if your pet isn’t too keen on swimming, the water’s depth should be around half the turtle’s height ideally. But if the box turtle has had some practice before, the water’s depth can match its height or can even be a few inches deeper.

Can I Use Tap Water for My Box Water?

Since the box turtle doesn’t need much water, it can be tempting to make do with tap water. But that’s not a good practice at all. Tap water contains fluoride, aluminum, arsenic, iron, lead, and even pesticides. So, if your box turtle drinks water during the swimming session, it might get seriously ill.

Although this may seem like a far-fetched scenario, always make sure to opt for distilled water.

Despite being terrestrial animals, a turtle’s health is strongly impacted by water quality.

So, you have to maintain a sound filtration system at all times for your pet.

Can I Add Water in My Box Turtle’s Tank?

It’s best to avoid adding water to a box turtle’s tank. If you have a spare tank, you can go ahead and add water only a few inches deep for your pet’s private swimming pool.

But don’t add water to the main tank.

If you have a tank big enough, you can create a beach-like landscape, which your pet will absolutely love. Otherwise, don’t.

Some new owners commit the mistake of filling the tank with water completely when raising two different turtle species. For example, let’s say a red-eared slider and a three-toed box turtle.

In that case, your box turtle will struggle immensely and hold on to equipment like a filter or heater as it tries to stay on the surface for air.

Since box turtles aren’t too adept at swimming, you must always make sure that they can exit the water easily when swimming. Deep or running water are equally dangerous too. And lastly, don’t ever let your box turtle swim unsupervised.

They Should Exit Water Easily

Since box turtles aren’t too skilled at swimming, they’ll get fatigued quickly. They must exit the water easily. If the shore is too far, they may not always make it to the land and drown instead.

Thus, make sure the water body, which your box turtle is swimming, isn’t too big.

The Water Shouldn’t Be Deep or Running

Like we have already established above, the water shouldn’t be too deep or running.

For most parts, box turtles only like to paddle around a bit and simply sit in the water.

If the water is deep or running, it hinders their already lacking swimming skills. That, in turn, heightens the risk of drowning.

Since box turtles are prone to drowning, one must keep a watchful eye whenever it is swimming.

Don’t forget to monitor if your turtle’s trying to breathe in air, if it’s swimming below the surface, and if it’s trying to come to the shore.

Can My Box Turtle Get Sick from Swimming?

If a box turtle is overexposed to water, it can get sick very quickly. If the water’s mineral content is high and your turtle drinks it, it can harm your pet’s health.

Secondly, box turtles need ample basking after the swim. In the absence of a proper basking spot, turtles won’t dry themselves or shed their old shells. As a result, your pet will develop shell and skin complications like shell pyramiding.

It is a condition when the top of the shell, also known as carapace, grows abnormally due to an excess of protein in the body.

How High Should A Box Turtle’s Water Container Be?

For a box turtle, the water container shouldn’t be higher than half of their shell’s height. It should usually clock in around 1.5 to 2 inches. The water’s depth for baby turtles should be even lower.

That way, the risks of your turtle drowning is completely minimized.

And since turtles love to poop in the water, make sure to clean the container and change the water a few times a day.

Box turtles are known to swim clumsily in shallow waters. The answer to can box turtles swim can differ depending on the subspecies. For instance, eastern box turtles are good swimmers compared to three-toed box turtles. However, it can also boil down to the extent of practice a turtle has had.

Since box turtles don’t excel at swimming, you need to keep a very close eye when they’re out in the water. They don’t have webbed feet like other turtle species make it more challenging for them to swim. They can also get tired early.

As a turtle parent, you need to understand that some turtles enjoy swimming while others simply don’t. By understanding your turtle’s personality, anatomy, and unique needs, you can ensure your box turtle lives a long, healthy life.