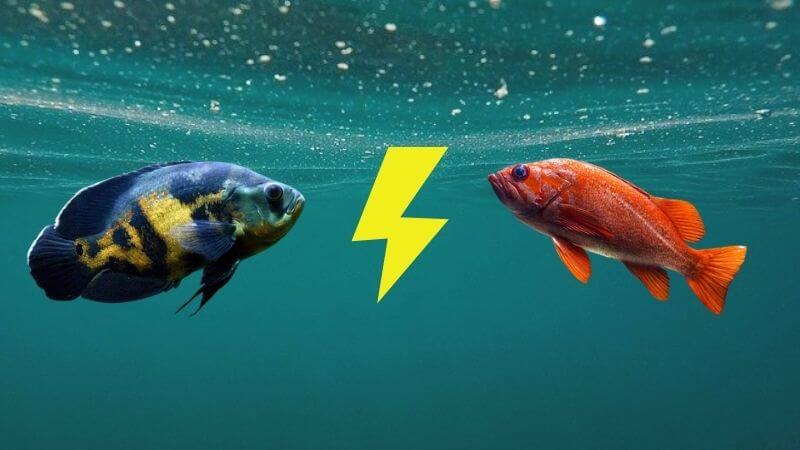 Goldfish were my first fish – I was given a pair on my 10th birthday. Fast forward a decade and a half, I have an intense love affair with cichlids. Sometimes I wish I could put cichlids and goldfish in the same tank. Oh, what a sight it would be! But can cichlids live with goldfish?

Are there any tricks one can pull to raise these two brilliant species under the same roof?

Can Cichlids Live With Goldfish?

No, cichlids and goldfish cannot live together for several reasons. First, cichlids are tropical fish that thrive in 76°F – 82° (24-28°) temperature range, whereas goldfish are coldwater species that need water to be around 68° to 74° F (20-23°).

Besides this, since cichlids are best known for their hostility and agitation, your poor goldfish will face endless bullying, biting, and nipping. Worst-case scenario – your goldfish will be a delicious snack for cichlids.

Bottom line: It’s simply not possible to fulfill the needs of tropical and coldwater fish in the same tank.

During my research for this blog, I came across a few owners who shared that they’ve successfully raised cichlids like angelfish and blood parrots alongside goldfish.

However, these cases are anomalies. And there’s a difference between barely surviving and thriving.

Let’s explore the reasons cichlids cannot live with goldfish below.

As I mentioned above, cichlids come from tropical regions and are accustomed to warm water. On the other hand, goldfish need cold water. Exposure to warm water will unnaturally increase their metabolism and invite health hazards.

Here’s the tricky part. 74° and 76° seem pretty close, right? So, maybe there’s a tiny chance that they can thrive in a similar temperature – let’s say 75°F?

On paper, that’s correct. But in the real world, nah. 74°F is the highest limit for goldfish, while 76°F is the lowest limit for cichlids. These figures represent extreme temperatures your goldfish and cichlids can survive in, respectively.

Exposing fish to the extreme ends of the temperature range can prove fatal in the long run, if not immediately.

And it goes without saying – you should always strive to maintain the temperature at the middle range – not the ends.

So, by keeping fish in the wrong water temperatures, you will be severely stunting their life expectancy.

Cichlids And Goldfish Together Need A Giant Tank

There are at least 200 goldfish and 356 cichlid species known to men today.

I can’t account for every single species, but most cichlid species we keep as pets clock in between 4-10 inches long, with some growing up to 14 inches in aquariums.

Similarly, most indoor aquarium goldfish grow up to 6 inches long. If raised in a pond, they can grow up to 14 inches.

However, if the tank is cramped, most goldfish stay just about 1-3 inches long.

A single goldfish needs at least a 20-gallon tank. If you’re raising two, the recommended tank size is 40+ gallons.

For cichlids, the absolute minimum recommended tank size is 30 gallons.

On top of that, cichlids are highly territorial and demand a lot of space. So, as you know – bigger is always better.

Therefore, you will need a reasonably big tank to house both cichlids and goldfish. A smaller, cramped tank will compromise a fish’s potential adult size and swimming abilities while increasing bio-load and potential health risks that follow it.

But a bigger tank means investment in bigger equipment and a lot of elbow grease in general. And that’s not workable for everyone.

Cichlids And Goldfish Cannot Get Along

Goldfish are as gentle as they look. They’re social animals that love living in groups and are even known to interact with fish from other species. They don’t claim territories and are a breeze to raise in community tanks.

Unfortunately, the same cannot be said about cichlids. They are oh so notorious for their temper. They’re aggressive and extremely territorial. Death by bullying is a common occurrence in a cichlid tank.

Without a shadow of a doubt, your goldfish will suffer mentally and physically in a cichlid’s company. To make matters worse, cichlids will nip at goldfish’s long, flowy fins.

All in all, your goldfish will be super stressed. Some signs of stress are erratic swimming patterns, rubbing the body against gravels and rocks, and crashing at the bottom.

And one more thing – if your goldfish are small, they’ll definitely be the next meal for your cichlids.

Maintaining The Tank Environment Will Be A Big Challenge

Goldfish are hands down the messiest in the fishkeeping hobby. The amount of bio-load they produce is simply astounding. But cichlids are a close second, in my opinion.

Together in the tank, they’ll wreak havoc – I am not even exaggerating.

Toxic buildup of ammonia, nitrite, and nitrate will engulf the tank sooner and more often. While goldfish are hardy and tolerant of wrong parameters to an extent, cichlids do not take well to environmental disbalance.

The slime goldfish release from their body is also known to pollute the water a lot quicker.

The signs of ammonia poisoning in fish are bleeding or purple gills, clamping, red streaks, panting, and lethargy.

On the other hand, the signs of nitrite poisoning are brown gills, rapid gill movement, and listlessness.

In essence, you will have to conduct water changes a lot more than you’d want to. And there will only be a small room for mistakes.

As you already know, dirty water is an open invitation for a plethora of diseases.

Why Are My Cichlids Dying? Don’t Make These Mistakes!

How To Keep Cichlids And Goldfish Together?

Please read this information with a pinch of salt because keeping cichlids and goldfish together comes with many risks. However, I dug through forums and found that some experienced fishkeepers have had a fair bit of success. The tank’s size, the fish’s temperament, and your experience are pivotal.

You Will Need A Big Tank

Yes, if you want to keep cichlids and goldfish together, you will need a big tank. I’d say around 100 gallons or so. Also, you will need to add plenty of plants and decors that will serve as hideouts for subdued goldfish.

Goldfish aren’t territorial, but you know the drill with cichlids. Carving territories and fiercely guarding them is their innate nature.

So, if you think you can commit to getting a bigger tank and all the responsibilities that come with it, you might give it a shot.

Look Into The Breed

Not all cichlids have anger problems. Some peaceful cichlids that thrive in the community tank are keyhole cichlids, german blue rams, blue acaras, and electric yellow labs.

If you can achieve the balanced water parameters for both cichlids and goldfish, these fish are your best bets.

Also, make sure the goldfish you are going to add don’t grow too big too. Mid-sized goldfish like the twisty tail, butterfly, and ryukin can be your best bets.

The most crucial factor to look into if you’re considering keeping cichlids and goldfish together is your fishkeeping experience. In inexperienced hands, this could be a disaster.

If you think you can strike the perfect balance in areas like pH and water temperature, you might have a chance. You should also be ready to conduct frequent water changes,

On forums, some owners reported that they’ve kept parrot cichlids and goldfish together, while others claimed to have paired goldfish with angelfish with blue rams.

So, you see, it isn’t exactly impossible if you have the right experience and tenacity. But at the same time, you should also be mentally prepared to face the untimely death of young fish.

Can Cichlids Live With Guppies?

No, in most cases, cichlids and guppies cannot cohabitate. Guppies barely grow over 2 inches long – thus, they will be a meal for your cichlids. As a matter of fact, guppies are often used as feeder fish for cichlids.

However, small and peaceful riverine cichlids like rams and kribs can make good companions for guppies.

Can Cichlids Live With Koi?

No, cichlids cannot live with koi because they have entirely different water parameters. Koi fish neutral water with pH around 7, while cichlids demand alkaline water with pH as high as 8.4.

Besides, koi are coldwater fish, whereas cichlids are tropical fish that require water to be on the warmer side.

Can Angelfish Live With Goldfish?

I came across a hobbyist who successfully raised angelfish and goldfish together, but I’d still recommend otherwise. This is because angelfish are tropical fish that need warmer water, while goldfish thrive in cold water.

And if you ever come around raising them together, angelfish will probably nip and attempt to devour goldfish.

No, goldfish cannot live with blood parrot cichlids. Although a blood parrot won’t be able to harm goldfish because of its deformed mouth, it’s still unwise to house them together.

After all, they come from different corners of the world and thrive in very different water parameters.

However, a hobbyist on the forum did report to have housed blood parrots and cichlids together. Reportedly, he set the water temperature at the warmer side and used extra filtration.

Can African Cichlids Live With Goldfish?

Goldfish are peaceful and social fish that will have a hard time sustaining in the company of aggressive African cichlids. Besides the inevitable harassment and bullying the goldfish will face, these fish require entirely different water parameters.

Can Convict Cichlids Live With Goldfish?

No, convicts and goldfish cannot live together in the same tank. For starters, they need different water parameters in terms of temperature and pH. Second, goldfish won’t be able to hold their ground against furious convicts.

Can Jewel Cichlids Live With Goldfish?

No, jewelfish and goldfish cannot cohabitate together. This is because jewelfish need warmer water, but goldfish require colder water. And that’s a reason enough to not house them together.

While choosing tankmates for jewel cichlids, make sure to only select similarly sized fish that can hold their own against jewel cichlids.

Can Zebra Cichlids Live With Goldfish?

Water temperature-wise, goldfish and zebra cichlids cannot live together. However, suppose you can strike the right environmental balance. In that case, it can be possible since zebras are comparatively more peaceful and social than their African cousins.

No, cichlids and goldfish simply cannot live together. They come from entirely different parts of the world and need quite different water parameters to thrive.

Cichlids, who hail from the tropics, need warm water, while goldfish are coldwater fish. Thus, they cannot be kept in the same tank.

Besides that, as you already know, cichlids are notorious for their angel. Peace-loving and docile goldfish will have difficulty adjusting with cichlids who will relentlessly bully and injure them.

Do Cichlids Sleep? Can They See In The Dark?

Do Cichlids Need A Heater? What Temperature Is Too Low For Them?