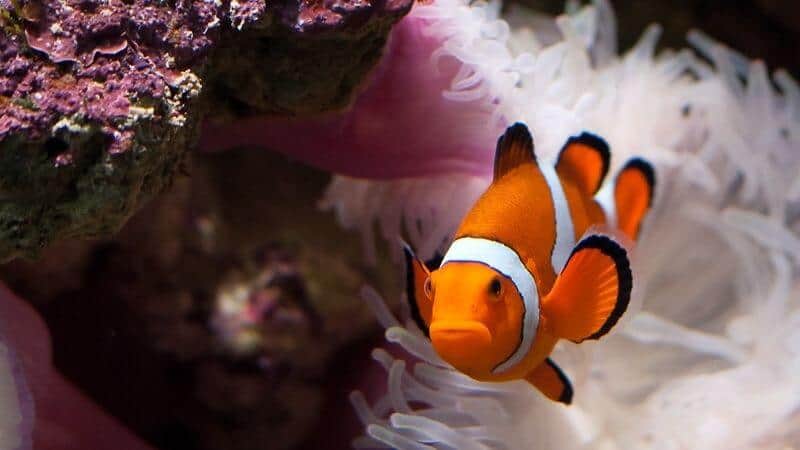 Clownfish were thrust into the limelight overnight when Finding Nemo was first released in 2003. Almost two decades have passed, but they are still the emblem of the saltwater fishkeeping hobby. Don’t you agree?

As hundreds and thousands of people jumped on the ‘getting a Nemo fish’ bandwagon, several of these fish ended up in the wrong hands and confined to the wrong living conditions.

Marlin was devastated when Coral got swallowed by a barracuda. But as we discussed in the previous blogs, that’s not exactly how he would have reacted in the real world.

And that brings us to our question of the day. Can clownfish live alone?

Would they thrive when unaccompanied like bettas do or get nervous and stressed like danios and tiger barbs?

Yes, clownfish can live alone. Although they would thrive in a pair, they are perfectly capable of leading a solitary life. Many hobbyists who are testing waters in the saltwater avenue for the first time often opt to raise just one clownfish at a time. And it’s alright.

As a matter of fact, it’s actually difficult to answer whether keeping a single clownfish is cruel or not. We for sure know they are not like bettas that even fight their own reflections or like barbs that resort to nipping fins if their school size is small.

Luckily, clownfish fall somewhere in between these two extremities.

That being said, note that clownfish are prone to stress if they fancy living in groups. Owing to their rigorous social interactions to maintain group dynamics, stress is a natural part of a clownfish’s life.

And if you want your clownfish to show their most natural behaviors possible, it’s best to keep them in social groups that enable them to do what they’re born to do naturally.

However, sometimes, keeping clownfish in pairs or groups can become counterproductive because clownfish are innately territorial beings. Plus, there’s no guarantee that the fishes will pair up and get along.

There’s every chance that the dominant fish (the alpha female) will bully the subordinate males until they bite the dust.

Therefore, if you’re not confident about your fishkeeping skills yet, you should stick to keeping a single fish.

TL; DR – If your tank has more than enough space and you’ve previous experience raising clownfish, you can keep a pair or even more of them. But if you don’t have the resources or time to look after more than 1 fish, it’s okay to just house 1 of them at a time – Don’t worry about them getting lonely or stressed.

While it’s true that clownfish tend to be more active and expressive when kept in a group, they’re also perfectly capable of leading a solitary life when left to their own devices.

I currently have a pair of ocellaris clownfish. But when I first dabbled in the saltwater hobby, I kept only one percula fish for the longest time.

In both instances, I ensured that the fish have access to a healthy diet and plenty of space.

As always, below, I have included a segment where I pool relevant answers left by hobbyists on different forums so you can view them all in one place.

Interestingly, this time, I came across two different kinds of answers. While some swore that their fish lived alone happily, others reported that they sulk when unaccompanied and thrive in groups.

Have a look at both kinds of answers!

Can Clownfish Live Alone? Those Who Agree!

Note: All the comments expressed below purely belong to their respective authors.

“Your clowns will be fine. One of my local fish stores had a single clown for several years in a 30-gallon bio cube.”

“They don’t need to be in pairs. I think your LFS was just trying to get you to buy another one.”

“You don’t need to get a pair. However, I have found clownfish to be much more active if there’s a pair.”

“You most definitely don’t need 2. You are less likely to have issues with just 1 as there is no guarantee 2 will pair up or even tolerate each other.”

“They don’t necessarily have to be in pairs. But they are more interesting that way, though.”

“My clownfish was more active and had less torn fins when alone.”

“It’s perfectly fine to have just one. People just prefer having 2 because they’re often more interesting to watch.”

“What defines a happy clown anyway? Mine has been alone for a few years now. He eats healthily and swims normally.”

“I too have had singles. One was an Allardi. Other was a Snowflake.”

Can Clownfish Live Alone? The Nay-Sayers!

Note: All the comments expressed below purely belong to their respective authors.

“I like watching the progression of a pair combined with the symbiotic relationship between them and anemone. For me, it’s worth the risk of possible aggression.”

“I would recommend getting a pair. They are more active and confident when in a pair than alone.”

“In my experience, clowns are pretty social. My little guy sulked until he was added to the other tank with green chromis. He joined their school and perked up right away.”

“My clown was always active but even more so now that I have added the sailfin tang.”

“Clowns can be a bit of a bully, but they do enjoy having friends around.”

As you can see, there are two schools of thought. The verdict is yours to make.

What Happens When A Clownfish Is Alone?

All clownfish are born gender-neutral at the start. But if you have just 1 clownfish in the tank, it will strongly start leaning towards becoming a female. As there is no companion to suppress it, there’s no reason for the clownfish to turn into a male.

But since it is the sole fish in the tank, its sex doesn’t play any significant role.

If you keep a school of clownfish, the animosity of the mating pair keeps the subordinate males from becoming females. They all remain sexually immature.

But with a single clownfish, this suppressing force is absent. Nobody is stopping the single male fish from becoming the alpha female.

Are Clownfish Happier In Pairs?

From what some hobbyists reported on different forums, clownfish are happier and more active when kept in pairs. However, you should take this advice with a pinch of salt because there’s no guarantee two clownfish will always pair up.

While it’s definitely true that the clowns will be more active, and you’ll get to see their unique antics firsthand in pairs, it’s also true that they may not necessarily pair up at all.

If they don’t pair up, the dominant female will make life miserable for others.

Your best bet here would be to introduce two small fish that haven’t yet reached sexual maturity. This way, they can pair up naturally and establish themselves.

What Happens When You Keep Multiple Clownfish Pairs Together?

When you keep multiple clownfish pairs together, your tank will turn into a battleground for the stand-off between different pairs. They will fight and fight some more to the point that the loser kicks the bucket.

No matter how big your tank is, it’s recommended to only keep 1 mated pair at a time.

But if you are really committed to keeping more than 1 pair, using a tank divider or getting a super long tank with multiple anemones can be helpful.

Before we end the blog, let’s quickly look at some of the most frequently asked questions at Urban Fishkeeping.

Can Clownfish Live In Saltwater?

As a matter of fact, this is an interesting topic. If you are interested in learning more about what happens when saltwater fish are kept in freshwater and vice-versa, you will love this article.

But even if you give it a miss, just make sure that you don’t expose your clownfish or any other saltwater fish to freshwater. It will turn into a disaster.

Can Clownfish Live With Other Fish?

Yes, clownfish can happily live with other fish. Although they are not the most social fish out there, they do make great additions to community tanks and get along fairly well with several different fish as long as there’s enough room in the tank.

How Long Do Clownfish Live?

Clownfish enjoy a decent lifespan. Under the right care, they can live for around 20 years or more and will surely outlive most of your other pets.

However, their lives are often cut short in captivity due to the wrong diet and poor environment. It’s not uncommon for a clownfish to live for only 3-6 years on average in our home aquariums.

Do you want to know how old the oldest clownfish is? Click away!

Want to know even more about these gender-bending marvels? Check out this blog!

Clownfish Size – How Big Do They Get?

Depending on the species, clownfish can get anywhere between 3-7 inches long. Perculas are the smallest ones in the family, reaching only around 3 inches long.

On the other hand, blue striped clownfish are among the largest ones, growing around 6 inches long.

Clownfish Tank Size – How Big Should The Tank Be?

For small fish like percula and ocellaris clownfish, the minimum recommended tank size is 20-30 gallons for a single fish. However, bigger species like blue-striped clownfish and aggressive ones like McCullochi clownfish require about 70 gallons of space per fish.

If you’re interested to know the minimum recommended tank size for all clownfish species, you’d love to check out this article.

Clownfish aren’t solitary creatures like bettas. However, they don’t necessarily get lonely and sad when kept alone.

If you don’t have the time, resources or will to raise multiple clownfish, it’s perfectly fine to just keep one.

But if possible, try keeping at least a pair. It’d be fun to watch their antics.