Can Glofish Tetras Live With Angelfish? It Can Be Risky! 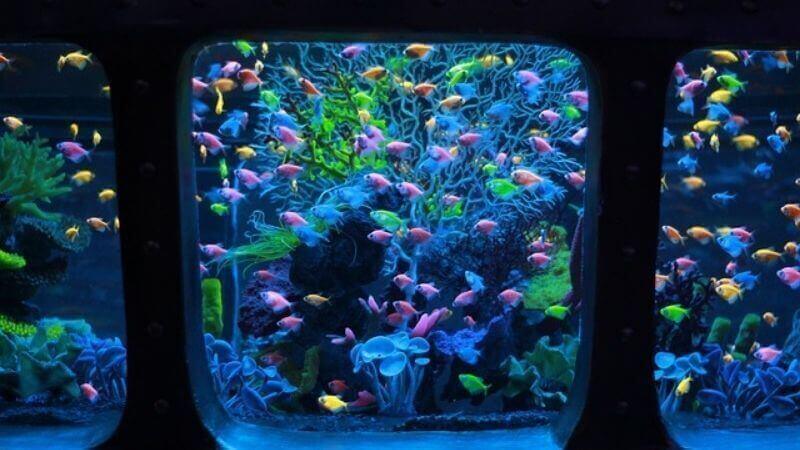 I’ll let you in on a little secret. For the longest time, I thought glofish were artificial, battery, or whatever-powered decors for our fish tank. So, when I learned these are living, breathing fish with a heartbeat, it knocked my socks off.

I haven’t yet gotten around to owning glofish, but I’m considering getting some as a Xmas present from me to myself. So, I’ve been doing some homework and wanted to share it with you. So, let’s begin with: can glofish tetras live with angelfish?

Can Glofish Tetras Live With Angelfish?

No, black skirt tetras aren’t aggressive. They’re social and easy-going for the most part. They will rarely show any signs of aggression.

They enjoy their own company and seldom have a beef with anyone else in the tank. These inquisitive fish love to swim around and explore new things in the tank.

However, they have a penchant for flowing fins of fish like angelfish and betta. We cannot rule out fin-nipping behavior.

The best you can do to stop this antic is to provide a big tank with plenty of hiding spaces. Keeping angelfish in a group or a pair can be helpful too.

How Many Angelfish In A 75-Gallon Tank? Use This Golden Rule!

How Many Angelfish In A 55-Gallon Tank? Use This Formula!

How To Stop Glofish Tetras From Nipping Angelfish’s Fins?

Nipping fins is an inherent behavior for tetras. Frankly speaking, you cannot stop glofish tetras from nipping angelfish’s fins entirely. But you can make conscious efforts to discourage this behavior. Providing enough space for everybody, feeding the right food at the right time, maintaining the water parameters, and setting up hiding places can be helpful.

Provide Plenty Of Space For Everyone

Angelfish get pretty big. And glofish tetras need to be kept in a group of many. So, you will need a reasonably big tank to accommodate all the fish comfortably. If there’s ample space for everyone, these fish won’t bump into each other when swimming.

Also, your angelfish will have enough space to claim their own tiny territory. Likewise, glofish tetras will not resort to fin-nipping to defend their territory.

Provide Enough Food For Everyone

The famous saying’ survival of the fittest’ applies to your aquarium fish to the bone. If the resources in the tank are scarce, the fish will naturally fight over it.

And glofish tetras being the fin-nippers they are, will not shy away from nipping your poor angelfish’s long, flowy fins.

Fish are prone to stress. They get afraid and anxious quite quickly due to various factors like the wrong environment, foul water, and poor diet. And when stressed, we cannot blame the fish for acting erratically.

So, it’s crucial to add plenty of hiding places in the tank so your fish can quietly retreat in there when they’re scared or irritated.

Polluted or wrong water parameters easily make your fish ill and stressed. And you know what they do when stressed – nip fins.

Therefore, you need to ensure the water parameters are to the T in your community tank at all times so the fish can live happily with a strengthened immune system.

The tables have turned, I see.

In the wild, angelfish routinely snack on neon tetras. So, don’t be surprised if you angelfish devours your pretty little glofish tetras. However, if you do certain things right, like provide enough space and food and introduce the tetras to the tank first, this tragic ending can be avoided 9 out of ten times.

How To Stop Angelfish From Eating Glofish Tetras?

The best way to discourage angelfish from eating glofish tetras is to introduce the tetras to the tank first. This way, when the angelfish first arrive, they won’t assume tetras to be food but merely a part of the ecosystem.

Therefore, you need to ensure the following to make sure your glofish tetras don’t end up in an angelfish’s tummy:

Can Glofish Danios Live With Angelfish?

Yes, glofish danios can live with angelfish. However, certain conditions should be met:

From what I read on the forums, it turns out that people don’t often recommend keeping these two species together. That’s because angelfish need the water to be on the warmer side.

However, these fish are hardy, and a little compromise within their range doesn’t harm anyone.

Glofish tiger barbs are notorious fin-nippers just like the OG tiger barbs. Therefore, it’s a bad idea to keep them alongside angelfish.

Animosity and brawl for territorial reasons are inevitable. And when the push comes to shove, your glofish tiger fish can easily take down angelfish.

Like tiger barbs, rainbow sharks are defamed for their fin-nipping habit. Therefore, it’s a bad idea to keep these fish alongside flowy angelfish.

These semi-aggressive fish won’t shy away from attacking your angelfish and nipping on their fins.

What Fish Can Live With Glofish Tetras?

Glofish tetras are schooling fish that are best known for their inquisitiveness and peaceful demeanor besides their brilliant looks, of course.

Provided that you have at 5-6 glofish tetras living together, the following would be the best tank mates for them:

While we’re at it, let me also tell you about the best tank mates for some other types of glofish.

What Fish Can Live With Glofish Barbs?

Glofish barbs lean more towards the aggressive side. They’re, in fact, known to be fin-nippers. Therefore, they shouldn’t be kept with fish like angelfish and bettas.

When kept in a school, a glofish barb’s aggression can be managed to an extent.

Here are a few possible tankmates for glofish barbs:

What Fish Can Live With Glofish Danios?

Like zebra danios, glofish danios are quite friendly for the most part. But as shoaling creatures, social status is a big thing for these fish. Also, aggression is not unheard of with these fish.

However, their temper can be tamed when lep in a group of at least 6 in a community tank.

Here are a few possible tankmates for glofish danios:

What Fish Can Live With Glofish Rainbow Sharks?

Glofish sharks are genetically modified rainbow sharks. So naturally, they’re super aggressive and territorial. Therefore, you have to be really careful while selecting tankmates for these fish.

Once glofish sharks claim a part of the tank, they will fiercely defend it.

And lastly, since they love hanging out at the bottom a lot, it’s best not to keep them with other bottom-dwelling species like plecos and loaches.

Here are a few possible tankmates for glofish sharks

Can Serpae Tetras Live With Angelfish?

As a matter of fact, I’d very highly recommend keeping serpae tetras in a species-only tank. I’ve heard one too many horror stories about them.

Can Neon Tetras Live With Angelfish?

Angelfish will eat neon tetras. And neon tetras will nip angelfish’s fins. But as bad as it sounds, yes, they can still live together.

However, certain criteria should be met. First, the tank should be pretty big. Second, it should feature plenty of hiding places.

Can Cardinal Tetras Live With Angelfish?

The answer is the same for this one too. Angelfish will attempt to eat cardinal tetras, and the latter will try to nip the former’s fins. Although cardinal tetras are slightly bigger than neon tetras, your angelfish can still eat them.

If you plan to house these two species together, make sure that there’s plenty of room and hiding spaces in the tank.

At the end of the day, glofish tetras are genetically modified black skirt tetras. They may have developed unique fluorescent colors, but their temperament is the same deep down.

So yes, they are fin-nippers. They will nip on your angelfish’s beautiful, flowy fins. But angelfish are no saints either. They’re quite adept ambush predators that routinely snack on tetras.

So, if you want to keep these two species together, you need to ensure the tank’s big enough and resources aren’t scarce! And lastly, adding the tetras first and angelfish later can increase the chances of peaceful cohabitation.