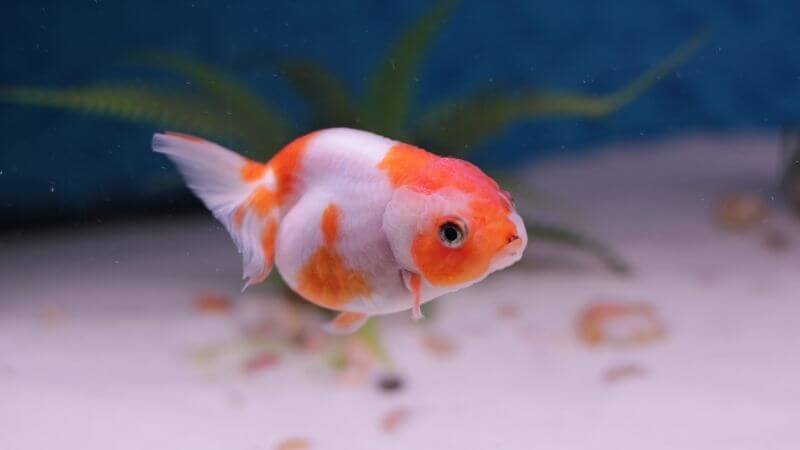 Goldfish are coldwater fish, and cichlids are freshwater fish. They require entirely different water temperatures to thrive. Therefore, it’s a bad idea to keep them together. Is it also a bad idea to give them food meant for the other? Can goldfish eat cichlid pellets? And vice-versa?

Yes, goldfish can eat cichlid pellets in the short run. It poses no immediate harm. However, don’t make it a habit. Goldfish and cichlids have somewhat differentiated nutritional requirements and metabolism. Therefore, it’s best to stick to food formulated especially for goldfish.

Yes, goldfish will readily eat food meant for cichlids, whether it’s flakes, pellets, or live food. In fact, they’ll accept almost all food meant for tropical fish. But just because they do doesn’t mean you should feed them cichlid food routinely.

The main differentiator between food made for tropical (warm-water) fish like cichlids and cold-water fish like goldfish is the amount of protein included. Food meant for cichlids have a comparatively greater concentration of protein than what’s needed for goldfish.

However, goldfish who thrive in cold water won’t be able to metabolize protein as fast as cichlids do. This won’t just impact the fish’s overall health but also pollute the water a lot quicker.

But here’s a catch.

Most goldfish bred in farms and raised in our homes are kept in higher temperatures. Ideally, the water temperature should fall between 68° to 74° F ((20-23°), but the temperature they’re exposed to falls at the higher end of the spectrum.

And at these temperatures, goldfish won’t just accept cichlid/tropical food but will also metabolize quicker and use the ingredients efficiently.

As I said earlier, goldfish require comparatively less protein in their diet than cichlids.

So, let’s compare the nutritional breakdown of goldfish pellets and cichlid pellets by the same brand.

While the nutritional concentration is almost identical, as you can see, the amount of protein in goldfish pellets is greater by 7%.

How Often And How Much To Feed Goldfish?

The ideal feeding frequency for goldfish is 2-3 quick meals throughout the day. As for how much, give no more than what they can finish within 2-3 minutes.

And always make a point to remove uneaten food. If unattended, they will quickly increase the tank’s ammonia and nitrite levels.

In the hobby, we are often overfed with information on how overfeeding is dangerous. It’s true – it will compromise your pet’s health. And it will also pollute the water, which will again have negative impacts on health.

However, underfeeding is equally dangerous, if not more. A malnourished fish will experience stunted growth, lead a poor life, and die untimely.

For example, lack of vitamin A leads to conditions like anemia, dropsy, and internal bleeding. Likewise, vitamin C deficiency can cause eye hemorrhage and a deformed spine.

And that takes us to our next segment, where we will discuss what nutritions goldfish need and how much!

Goldfish are omnivores. They sustain primarily on plant-based diets in the wild but occasionally snack on critters and small fish. Overall, their diet should contain essential nutrients like protein, vitamins, minerals, and fat.

However, they don’t require carbs and fiber as much as some other fish do.

Protein in the diet is irreplaceable for goldfish. They need it for proper growth and development. And it’s evident by the amount of protein present in commercial food formulated for them.

Young goldfish require at least 45% protein in their diet, while older fish can make do with 30% protein. Also, you should emphasize on plant-based protein, not animal protein, since it’s more easily digested.

Goldfish convert fat into energy. Thus, fat intake is quite crucial for them. Their diet should have around 5-10% fat. And unlike with protein, animal fat is preferred over plant fat.

For instance, fish oil is a widely used ingredient as a source of fat in commercial goldfish food.

Vitamins are imperative for goldfish to lead a healthy and extended life. Interestingly, their vitamin requirements are pretty similar to ours. They mainly require vitamin A, C, D, K, and folic acid.

And I’ve already touched on what happens if a fish lacks vitamins above!

Goldfish need minerals in their diet for the same reason they need vitamins. Goldfish can absorb a good amount of minerals they need from the water itself. However, it’s still wise to reinforce from your side – especially minerals like iron, magnesium, and zinc.

Goldfish require significantly less amount of carbs and fiber in their diet. It’s also evident in the nutritional label on their commercial food.

Fiber is often labeled as “ash” on the labels. And its concentration should not exceed more than 10% of a goldfish’s diet. If it does, it will inhibit the fish from intaking and retaining essential nutrients.

Likewise, excess carbs in the diet will deposit in the liver and compromise your fish’s health. Therefore, carb content shouldn’t exceed more than 10%.

What Do Goldfish Eat In The Wild?

Goldfish are opportunistic omnivores. They are also greedy eaters. In the wild, they eat the following:

What Do Goldfish Eat In Captivity?

The rule of thumb is to provide quality sinking pellets or flakes as a staple diet and reinforce nutritional requirements with occasional treats. Common diet supplements include brine shrimp, tubifex worms, mosquito larvae, bloodworms, and daphnia.

Here’s a list of readily available household food your goldfish can safely eat:

Make sure to boil all of these and chop them into small bits.

Single tail goldfish have relatively robust digestive systems than fancy, ornamental goldfish. That’s because they have a more natural body shape like a torpedo. Their bodies aren’t compacted by inbreeding and line-breeding.

And what this means is their organs are deformed and misplaced. So, they can enjoy a considerably varied diet than fancy goldfish. They will readily eat both sinking and floating food.

In fancy goldfish, their organs are compacted and often wrongly positioned. And naturally, this has a detrimental effect on their digestive systems.

The swim bladder is also often squashed by the intestines. Therefore, any blockage caused by food can quickly impact your fish’s buoyancy. Consequently, you have to be a bit picky about what you give them.

Yes, goldfish can safely consume pellets or flakes meant for tetras. However, tetras are tropical fish and require a comparatively high amount of protein in their diet. On the other hand, a goldfish’s diet should ideally include more plant-based matter.

So, in the long run, if you give your goldfish food meant for tetras consistently, they will be deprived of the nutrition they actually need. So, it’s just best to stick to species-specific food.

Your goldfish will not get sick or die immediately after eating betta food. You can occasionally give them betta food as a means to reinforce protein in their diet.

If you’re not convinced, there’s one more reason you should avoid it.

Goldfish prefer sinking pellets and will wait until the food has sunk to the bottom before eating them. But most food made for bettas are formulated to float since they prefer eating from the surface.

So, if you give your goldfish betta pellets, they’ll patiently wait until the food has sunk to the bottom and become soggy before eating them.

And by the time the food sinks and your goldfish consumes it, the ammonia will proliferate and quickly pollute the tank.

I compared the nutritional info for goldfish and catfish food side by side, and they’re almost identical. So, yes, you can safely give your goldfish food occasionally. But you know the frill already – don’t make it a habit. After all, catfish are tropical fish.

Frankly, this is a tricky question. They can and cannot eat cichlid pellets.

And their metabolism is different.

Goldfish, who live in lower temperatures, may not efficiently metabolize the high protein content of cichlid pellets.