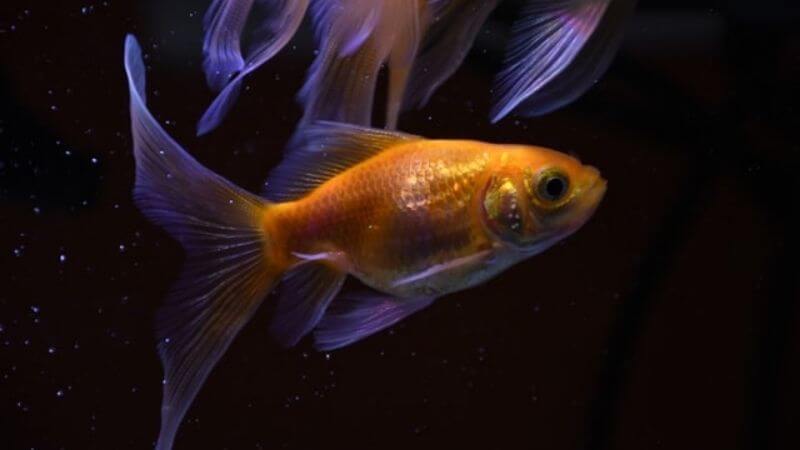 Goldfish are ubiquitous in aquariums everywhere. I’ve seen them kept with cichlids, bettas, angelfish, and whatnot! But people seldom realize that goldfish are a different breed than these fish. While it’s true that all of them are freshwater species, the subtle difference lies in the fact that goldfish are coldwater fish while the rest I mentioned are tropical fish. So, can goldfish eat tropical flakes?

And do you think temperature has anything to do with their metabolism and digestion? Of course, it does!

How? Let’s find out!

Goldfish are opportunistic feeders with a sizable appetite. So, they will eat tropical flakes without any qualms. However, tropical flakes contain a higher protein concentration than goldfish need. Therefore, they won’t metabolize all of the protein they intake and consequently excrete more dissolved protein waste.

In simple terms, it means that your goldfish will poop more often and in larger volume than they already do! But that should be the least of your concerns.

Feeding goldfish tropical flakes will impart no immediate harm. But the fish will not receive the right kinds of nutrients that it needs. Therefore, don’t be surprised if it experiences stunted growth, loses colors, or dies prematurely.

A goldfish’s average lifespan is 10-15 years! That’s super long for an aquarium fish. However, with the proper care, some varieties are even known to make it past their 30th birthday.

Yes, you read that right!

But unfortunately, most pet goldfish seldom get to live their lives to the fullest or longest. And improper diet is among the top reasons behind it.

There’s a reason why brands sell so many different varieties of food for different kinds of fish.

The fishkeeping hobby has advanced quite rapidly over the last 2 decades. Gone are the days when we’d have to meticulously make homemade food for our pet fish.

Today, many brands cater to the dietary needs of practically all kinds of fish available in the hobby – precisely formulating food based on their digestive prowess and nutritional needs.

So, just go ahead and buy your goldfish some good-quality food! You know it won’t cost much. 🙂

As always, I have brought together answers and opinions shared by hobbyists like you and me on different platforms for this question.

My goal here is to give you well-rounded information in a single platform so you can make an informed decision for your pet goldfish.

Note: All the opinions expressed purely belong to the respective authors.

“Yes, they can eat tropical fish food. It wouldn’t be too bad for them downright, but I would suggest sticking to goldfish food in the future.”

“Tropical flakes are not recommended for fancy goldfish, who are already prone to swim bladder issues.”

“The best thing to give your goldfish is goldfish food. While you can give betta pellets or tropical flakes, it should never be their long-term diet as it’s not formulated for the species.”

“Goldfish are omnivores, but their diet should have a higher percentage of vegetation than meat. Something very fatty and protein-intensive like betta pellets won’t make a good choice for long-term feeding.”

“Goldfish aren’t adept at digesting large amounts of protein – the more protein you give them, the more they poop.”

“In the short term, it would probably be okay. But goldfish and tropical fish need different amounts of protein in their diet. So just go buy a tub of goldfish food – it isn’t expensive!”

“Goldies have different dietary needs than tropical fish. They need less meat in their diet and do much better with plants and plant-based proteins. So be careful not to give them too much meaty product regularly.”

Okay, there you go! Looks like the public doesn’t approve of giving goldfish tropical food either!

And by the way, so many comments about “different kinds of fish” and “different dietary needs,” right? What does that really mean? And do they hold any significance?

How Are Goldfish Different Than Tropical Fish?

Goldfish were domesticated and selectively bred nearly 2000 years ago in ancient China! They are freshwater coldwater fish that thrive in cooler temperatures around 65 degrees F (18 degrees C).

On the other hand, most tropical fish, famed for their beautiful colors and patterns, come from the tropics surrounding Asia and South America. Therefore, they prefer their water to be toasty warm around 72-85 degrees F (22-29 degrees C).

Goldfish differ from tropical fish in several ways – ranging from dietary needs and eating patterns to nutritional and environmental requirements.

And now that you know the difference between these breeds, let’s quickly skim through goldfish’s dietary needs.

The food you offer your goldfish has a profound impact on the fish’s wellbeing. Therefore, it’s essential to understand its unique dietary requirements to ensure you’re giving the right food in the right amounts and at the right intervals.

And although they are omnivores, they have a strong inclination towards plant-based food.

Ideally, a goldfish’s diet would contain a moderate amount of protein and a high amount of fiber. However, tropical foods usually have a higher protein concentration than what goldfish need.

Goldfish’s forebears primarily snack on algae, plants, shrimps, small fish, and insects in the wild. Therefore, you need to keep this in mind while shaping their diet routine.

That’s not all! Turns out that certain goldfish varieties sustain more harm than others when fed tropical food. Keep reading to know!

Common or singletail goldfish have more robust digestive systems than their fancier counterparts. That’s because they have more naturally-shaped bodies.

Their bodies are longer, torpedo-shaped, and less impacted by line-breeding and inbreeding. This means their internal organs are usually in the right place and position and have developed normally.

Therefore, they can eat relatively wider varieties of food than their fancy cousins. They can get away safely for longer, even when fed tropical flakes.

However, fancy goldfish varieties have much more compacted body shapes. And in most cases, it can have a detrimental impact on their digestive systems. As pretty as fancy goldfish look, their internal organs are often squashed up, stunted, or deformed.

Consequently, they’re more prone to digestive complications and swim bladder disease. So, if you raise fancy goldfish, it’s best that you strictly stick to species-specific food.

Not all fancy goldfish species incur this problem, but it’s best to err on the side of caution, isn’t it?

Now that it’s clear that goldfish have profoundly different dietary requirements and capabilities than your tropical fish, let’s compare the ingredients and compositions of commercially available food for both species.

For this showdown, I chose my go-to brand, Hikari.

We will be comparing Hikari Goldfish Gold and Hikari Micro Pellets For Tropical Fish.

So, as you can see from the table above, the nutritional compositions in goldfish food and tropical fish food are quite different.

The protein composition in tropical fish food is greater by almost 9%.

However, the vitamin concentration in goldfish food is relatively higher.

Now, I neither understand nor plan to go through the nitty-gritty of these tables or the ingredients listed. But the compositions of these two products look different even right off the bat.

Therefore, I’d suggest sticking to species-specific food for all fish – not just goldfish!

Why Should You Not Give Goldfish Tropical Flakes?

As evident from the table above, it’s clear that the main differentiator between food meant for goldfish and tropical fish lies in their protein content. Food meant for tropical species like cichlids, bettas, and guppies have a higher protein concentration.

Now, the thing is, in warmer temperatures, fish can metabolize quickly, which implies that there will be less excretion of dissolved protein waste and thus less pollution.

But as we discussed above, goldfish thrive in cooler water. Therefore, if you feed them protein-rich tropical flakes, they won’t efficiently and quickly metabolize protein as tropical fish in warm waters do.

As a result, they will poop more often and in large quantities. And polluted water is just the tip of the iceberg – you know that, right?

But while researching, I found a counterargument that made me rethink my opinion.

A user on Quora reported that most goldfish that make their way into our home aquariums were bred and raised in higher temperatures in commercial farms.

The accepted temperature range for goldfish is between 68-74 degrees F. And the temperature they’re kept in often falls at the higher end of the spectrum.

Therefore, the user concluded that your goldfish can metabolize tropical flakes and foods without complications at higher temperatures.

Hmm… that’s some food for thought. But I’d still advocate for species-specific food!

Before we end this article, I’ll answer a bunch of the most frequently asked questions that we receive. Take a seat!

Eating tetra tropical flakes will not harm your goldfish immediately. But flakes meant for tetras often have higher fat and protein content, which will be difficult to digest and metabolize for your goldfish.

And while it won’t inflict instantaneous harm, it will indeed compromise your goldfish’s health in subtle ways and lead to devastating impacts.

Yes, goldfish can perfectly eat baby shrimp – but there’s one catch. It should only be given occasionally as tasty treats. Shrimp is exceptionally rich in protein, and your goldfish may fail to metabolize and digest the nutrient efficiently.

Therefore, it can be harmful to your goldfish to consume shrimp more often.

Yes, goldfish can safely eat cichlid food in the short run. However, since cichlids are tropical fish, their dietary requirements somewhat contradict goldfish’s.

Cichlids need more protein, fat, and meaty supplements in their diet, which can be hard to digest for your goldfish.

If you are keen to learn more about this subject, here’s a link to an article I think you’ll like!

Yes, goldfish can eat glofish food, but I’d not suggest giving it in the long run. Turns out that glofish food contains a higher concentration of protein and fat than what a goldfish needs. Can’t complain – after all, all 5 glofish variants are tropical species.

Your goldfish won’t get sick in one fell swoop if it consumes food meant for bettas. However, most food formulated for bettas have a higher protein and fat concentration, which isn’t really ideal for goldfish.

Also, goldfish prefer sinking food, but most betta foods are designed to float as they are surface-feeders. Thus, your goldfish will inhale more air than food when trying to eat betta flakes or pellets!

Tropical fish require more protein and fat in their diet than what goldfish food has to offer. Thus, they won’t become malnourished or sick in a blink of an eye if given goldfish food, but it will definitely impact their health in the long run!

Yes, goldfish can eat tropical flakes. But it’s not really recommended. Food prepared for tropical fish has a higher protein and fat content. And since tropical fish live at higher temperatures, they can efficiently metabolize these nutrients without any complications.

However, as coldwater fish, goldfish cannot fully metabolize or digest food made for tropical species.

Therefore, although giving tropical flakes once in a while doesn’t pose any harm, it will compromise your goldfish’s health in the long run.