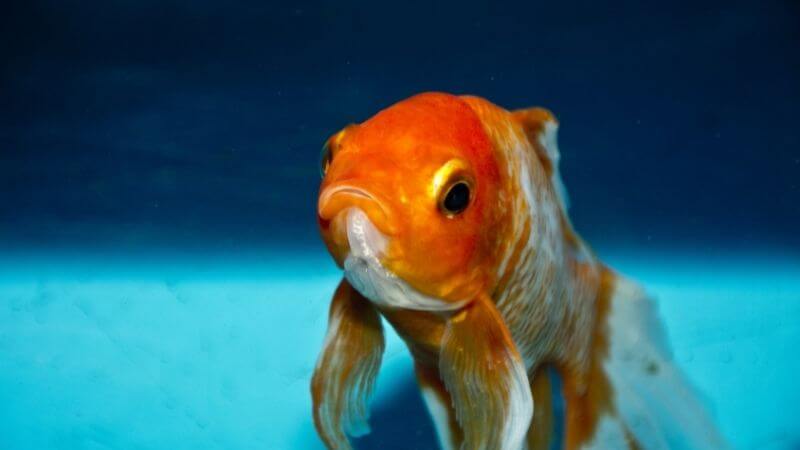 Observing a water body from the shore, it looks like one singular expanse of water, doesn’t it? But ask those who call it home. You’ll find out not all waters are made the same. Like plains differ from hills even though they’re made from the same ‘earth.’

To put it simply, the planet earth offers two broad kinds of watery homes – freshwater and saltwater. While freshwater has a low salt content – saltwater, as the moniker suggests, is salty.

And different fish species have evolved over thousands of years to live in their respective water bodies. But what’ll happen if you keep them in the wrong waters?

Will they thrive or die within a matter of seconds? What about goldfish? Can goldfish live in saltwater?

Can Goldfish Live In Saltwater?

Goldfish are coldwater, freshwater fish. Therefore, no. they cannot survive in saltwater. If they are exposed to saltwater, the water inside their bodies will flow out their cells. As a result, they will die of dehydration.

Goldfish are strictly freshwater fish. Their kidneys can only function efficiently in freshwater.

Studies have shown that the maximum salinity that goldfish can tolerate is less than 20 ppt. However, saltwater tends to have a natural salinity of 35 ppt, which means that every kg of water has 35 gm of dissolved salts.

Research led by Semra Kucuk of Turkey’s Adnan Menderes University showed that goldfish can tolerate salinity up to 8 ppt without any negative consequences.

I ransacked through different forums to see what hobbyists have to say on the matter. Here are their answers – unfiltered!

“LOL. Yes, they can live in saltwater – just not very long, that is. I’d guess around 30 seconds!”

“Goldfish would make tasty food for some fish in saltwater =D.”

“Goldfish can – they usually live up to a few minutes in saltwater.”

So, looks like it’s a big NO from our fellow hobbyists as well.

Now, before we turn to jargon and nitty-gritty of why goldfish cannot live in saltwater, let’s have a look at what the ideal parameters look like for goldfish.

Not all fish are made the same. Thus, not all of them can handle all levels of salinity.

They just prefer a teeny tiny amount of salt concentration to which their bodies are physiologically adapted.

And as you can guess, goldfish are stenohaline fish.

Also, freshwater bodies have a salt content lower than 1%, whereas seawater has an average salt content of over 3.5% of the seawater’s weight.

IT’S ESSENTIAL TO UNDERSTAND A FEW TERMINOLOGIES before I tell you why goldfish cannot live in saltwater. Let’s start!

It’s the process of water moving through a semipermeable membrane to a more concentrated solution from a lower concentration solution.

What Is Osmotic Pressure?

Osmotic pressure refers to the applied pressure to counteract the flow of water molecules across the semipermeable membrane.

The osmotic pressure increases as the water move across a semipermeable membrane to a higher concentrate solution.

Tonicity is the measure of osmotic pressure. There are basically 3 types of tonicities that one must understand to know why fish only survive in specific water bodies.

Now, let’s have a deeper look at what they mean.

Hypotonicity is caused by the higher content concentration inside the cell, causing the cell to bloat and burst because water keeps on flowing in to dilute the cell’s solution.

On the other hand, hypertonicity is caused by a higher content concentration outside the cell than inside it. This results in the cell shrinking since water flows out of the cell to dilute the content inside.

Isotonicity refers to the balance of solute concentration inside and outside the cell. There’s no change in the cell volume and absolutely no water movement between the membrane.

Now that you’re familiar with the terms, let’s answer one of the top queries.

Why Can’t Goldfish Live In Saltwater?

Next, the water from the cytoplasm moves into saltwater via the plasma membrane. This process will continue until the ion concentrations of the cytoplasm and saltwater become equal.

Thus, your goldfish will lose its body water to saltwater. This will severely dehydrate the fish, who may then succumb to death.

Therefore, they discharge a lot of water from their body to regulate the equilibrium.

Organs like the intestine, kidney, and liver are utilized to maintain the structure. For instance, the kidney’s role is to urinate the ions and waste materials.

Any change in salinity will bring about severe stress in fish. Therefore, the fish will use plenty of energy to stabilize their body in accordance with the new habitat.

But goldfish are sensitive and cannot maintain their structure in saline water. Therefore, they can’t survive in a highly salty environment for more than 5 minutes.

Are Goldfish Adapting To Saltwater?

Goldfish aren’t supposed to thrive in saltwater. But evolution is an exciting thing, isn’t it? Australian scientists have discovered that goldfish have become an invasive species in southwestern Australia’s Vasse and Wonnerup estuaries.

Estuary is a water body next to the ocean, where freshwater from rivers and seawater from seas mix. So, its salinity is higher than a river’s and lesser than the ocean’s.

The salinity in our home aquariums that house goldfish is probably 0 salinity. And the salinity in these estuaries is about 17. And to see goldfish thrive in such conditions has shocked the researchers as well.

If this invasion continues, the goldfish will wreak even more havoc than they already are! So far, they have encouraged algae bloom, stirred up sediments, and consumed the eggs of native species!

Here’s a link to the journal if you’re interested!

What Type Of Fish Can Live In Both Fresh And Saltwater?

There are certain species of fish that can live in both freshwater and saltwater bodies. They’re known as euryhaline fish. These fish can tolerate and migrate in both water bodies at or for a certain amount of time.

Catadromous fish live their entire lives in the freshwater but migrate to the sea through rivers to spawn and produce offspring. An example would be the European eel.

On the other hand, anadromous fish are born in freshwater, spend a good chunk of their lives in the ocean, and return to freshwater to lay their eggs. Some examples would include salmon, smelt, striped bass, and sturgeon.

Will Goldfish Die In Saltwater?

How Long Can Goldfish Live In Saltwater?

This answer depends on how salty the water is. Goldfish can survive in salty water for anywhere between a few minutes to a couple of hours.

Can Goldfish Survive In A Lake?

Lakes and slow-running rivers are the natural habitats of goldfish. Therefore, yes, they can safely survive in a lake.

No, goldfish don’t need saltwater. In fact, it is fatal to them in many ways.

No. goldfish are freshwater fish. They cannot tolerate the salinity level of a saltwater tank by a wide stretch. The maximum salinity goldfish can tolerate without negative consequences is 8 ppt.

If you keep your goldfish in saltwater, the water present inside their bodies will flow out of their cells. And thus, they will die of dehydration.