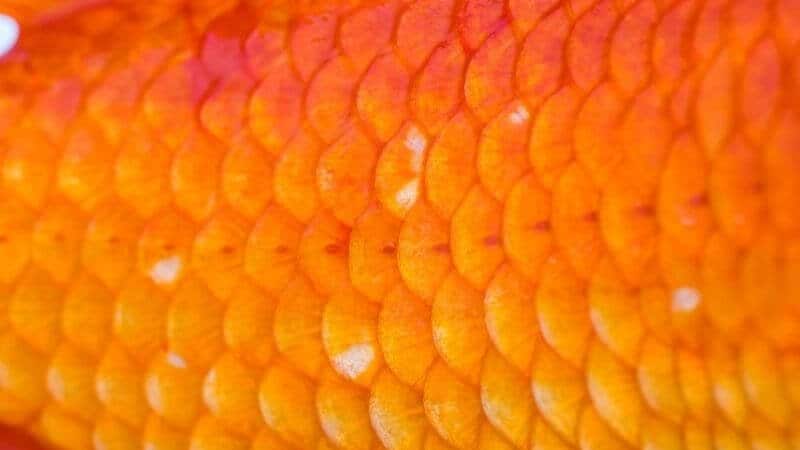 Goldfish are best known for their shimmery, tangerine scales that make them so iconic. Naturally, it’s worrisome when a goldfish starts losings its scales. And it’s not just an aesthetic concern but also a health one. Once lost, can goldfish regrow scales?

So, Can Goldfish Regrow Scales?

Yes, goldfish can regrow its scales that have been infected or hurt during accidents or in fights with other fishes. In fact, the scales regrow fast if the wound is not too deep, and if they are young, it regrows even quicker.

Young goldfish tend to regrow their scales much quicker than their older counterparts. However, your goldfish’s regrown scales might not sport the same colors they did before. You need not worry because it is entirely normal for the regrown scales to be off-colored or differently colored.

Now that you don’t need to worry about your goldfish regrowing its scales, you should also know why your goldfish is losing them in the first place.

So, we will discuss why do goldfish lose their scales and what you can do as a good pet parent to prevent that.

Why Do Goldfish Lose Scales?

Goldfish lose scales whenever there’s a problem with their health or their habitat. Unlike dogs, they aren’t the type to lose their scales during seasonal changes and at different growth phases. So definitely, losing scales in goldfish is concerning.

Without further ado, let’s dissect all reasons one by one.

When infected with diseases like Fusarium, fish start to lose their scale and experience other side effects like several dermatitis and systemic lesions. Scale shedding, also known as scale protrusion, is a prevalent disease among fish kept in an aquarium.

Let’s discuss what you can do to prevent illness in goldfishes.

When it comes to water quality, the pH has to be around 0.7 to 8.4 for a goldfish to thrive. Also, do not change water without considering water temperature. Sudden temperature changes can be fatal for goldfish.

Routinely clean the waste accumulated in the gravel. Also, you need to keep the tank well-oxygentated by changing water with dissolved phosphates.

For testing the water quality, use test kits that easily give out information on different water parameters like ammonia, nitrite, and nitrate levels within few seconds.

Goldfish grow big, which means you need to give them ample space to swim. If you are keeping a single goldfish, you’ll at least need a 20-gallon tank. However, in most cases, a typical adult goldfish will need 30 gallons.

If you were planning to keep a goldfish in a bowl, sorry to ruin the party; that won’t be enough even for a goldfish fry. Plus, research has indicated that round setups ignite stress in fish because of distorted vision.

Related: Can goldfish and guppies live together?

If your goldfish is losing scale rapidly because of fungus and illness, use medication immediately. Use Maracyn and Metronidazole to treat bacterial disease in goldfish. But you first need to seek professional advice before starting any medication.

Goldfishes are territorial and can get aggressive when other fish try to infringe their space. They fight over the food too. These frequent duels often result in nipping and biting – leading to torn and damaged scales.

So, what you can do is understand your fish’s needs and nature. Goldfish are solitary lovers and do not get lonely. So, it would be better not to cram the aquarium.

You need to get a bigger tank if you plan to keep multiple goldfish together. This will provide an ample amount of space and prevent them from bumping into each other frequently.

Also, decors like artificial plants and corals will lessen the goldfishes’ encounter. They also provide a haven for your goldfish to retreat to when it gets attacked.

However, if your fish are fighting even after getting enough space, it’s time you get a tank divider. A tank divider will permanently separate the two of them and will stop them from harming each other.

Whenever there’s a nutrient deficiency in your goldfish’s diet, it can cause severe repercussions. One such is the falling of scales. That’s why you need to feed your goldfish a well-rounded, varied diet.

Flake and granules are great choices of staple food for every goldfish. You can also use the mixture of live brine shrimp and frozen brine shrimp to supplement their diet. A goldfish diet should have an adequate amount of carbohydrates and protein.

Feeding timing and frequency play an equally important role in effacing diet deficits in goldfish. Feed 2-3 times a day, and also be careful not to overfeed.

Overfeeding will only result in indigestion and a dirty tank. Fish will still eat no matter how much you feed them. Overfeeding is just as fatal as underfeeding in fishes.

You need to check if your fish tank has anything with sharp edges, which could damage your fish’s scale.

To prevent such collisions, you can buy aquarium-safe décors for the aquarium, which will provide a safe surface for the fish to slide in and play without damaging its scales. These decors also act as a speed breaker for the fishes if they swim at high speed.

Goldfish are delicate and will get hurt when handled roughly. This might happen when you have to remove the goldfish during cleaning sessions. Also, our hands are among the most used body part, making them disease-transmitting medium. When handling goldfish with bare hands, you can transmit unseen and unexpected diseases like bacteria and viruses.

Wear a pair of gloves to cover your nails and handle gently when moving your fish. Also, make sure you don’t touch your goldfish once you give medication to regrow scales.

How Long Does It Take A Goldfish To Regrow Scales?

If the damage isn’t too severe, the goldfish scale can regrow within two months. You can see it healing after a week or so. If the water quality is maintained, the scales will gradually return to normal within two months.

However, the rate of regrowth varies with the damage that has been dealt with. Think of a black eye.

You can speed up the process by keeping the tank clean and applying medications. Also, remove any sharp object or decor from your aquarium. You can also use waterproof tape over sharp edges and make them blunter to lessen the impact.

Using water conditioners specified for goldfish can help in keeping infections at bay when your pet is healing.

For instance, TetraEasyBalance For Goldfish claims to balances the water parameters by reducing phosphates, regulating pH, and adding vitamins.

You can use it monthly or once every week if you haven’t had the time to change water. 2 teaspoons for every 5 gallons would suffice.

If the fish shows signs of restlessness, the reasons could be fungus or bacterial infections. Providing medication in the early stage will shorten the duration of scale regrowth in goldfish.

No, in most cases, the goldfish scales do not regrow in the previous color. But this is normal. Often the scale color will come back tinted or in a lighter shade. You need not worry because it won’t hamper your pet’s health.

If you want to accelerate the scale regrowth process, there are quite a few commercial options available.

Are Goldfish Violent Breeders That Cause Loss Of Scales?

No, goldfishes aren’t violent breeders. So there are fewer chances of these fish losing scales during breeding or copulation.

Fish scales are made up of calcium and phosphorus. These scales play an important role in adjusting a goldfish’s body to environmental changes and predators. Historical pieces of evidence have shown that scales regrow quickly in aquatic animals.

They grow back unless the damage is too severe or the water quality is lacking in your tank. You also need to add vitamins and minerals to their diet for a normal regrowth of their scales. And lastly, you need not worry about the different colors of the regrown scale, as this is common in goldfish.