Can Guppies Live Alone? Who Are Their Friends And Enemies? 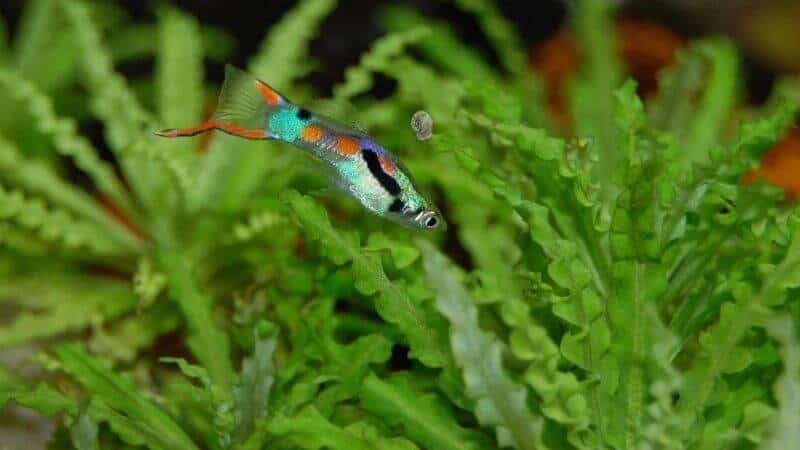 One may not know it, but guppies and humans have a lot in common than we might assume. It’s evident by 100s of scientific journals that attempt to decode the complex personalities guppies hide behind the innocent faces. So, in today’s blog, let’s talk about guppies and loneliness: can guppies live alone?

Guppies aren’t technically schooling fish, but they love to live in a social group. So, although guppies can live alone in a tank, it’s not necessarily good for them. There’s no tangible impact right at the start, but the stress of living alone and mating frustration can grow over time.

I saw many suggestions on the internet that it’s perfectly fine to keep a single guppy due to factors like low maintenance and small tank size. But I’d not advise you to choose little conveniences for yourself over a quality life for another being.

A single fish in any aquarium is a pretty sad sight, right?

Can Only Male Or Female Guppies Live By Themselves?

When asking can guppies live alone, people seldom ask it with a female guppy in their minds. But both male guppy and female guppy can live by themselves. However, they’d miss out on many things that a community tank offers. Thus, they’ll get bored and stressed rather quickly.

Can Guppies Get Lonely?

Scientists believe that there is a good chance guppies get lonely. Like humans, guppies have distinct personalities—innately fearless, cowardly, and curious. Thus, in the absence of social interaction, guppies might develop lonely feelings.

Stimulation is critical to keep a guppy busy and active. Since a tank with a single guppy will seldom have stimulations, it’s no surprise if a guppy gets lonely.

Here’s a video of guppies in a wonderful tank setup.

Can Guppies Die Of Loneliness?

Guppies may feel lonely, but it’s not exactly life-threatening. However, guppies can die from the stress that stems from loneliness. When kept alone in a tank, guppies can get jaded and anxious.

If you only have one guppy, it’s best to add a few tank mates. If that’s not a possibility, you can at least add a few decorations and plants to keep the guppy occupied for a few hours every day.

A study has shown that keeping fish in an enriched, physically complex environment decreases stress levels and boost brain growth.

How To Know If A Guppy Is Depressed?

Comprehensive scientific studies haven’t been conducted on a guppy’s psychology, but their swimming preference can be a tell-tale sign. A happy guppy usually swims near the top of the water surface, while a sad or stressed guppy opts to swim at the bottom.

If you’re talking about individual fry, they can’t live alone. However, a group of guppy fry can and should always be left alone. Guppies practice filial cannibalism, which means they eat their own offspring. Thus, guppy fry won’t survive long in a tank that houses adult fish.

And by chance, even if they don’t die, their growth will be severely stunted due to stress and constant.

Likewise, don’t keep smaller fry in a tank with big fry and juvenile guppies. While the bigger ones may not directly pose a threat to smaller fry’s life, they’ll seriously outcompete when it comes to food.

Smaller fry will have a hard time finding anything to eat.

Can I Only Keep Male Guppies?

By far, keeping only male guppies seems like the most popular choice amongst fish keepers. It sure does elevate the tank’s aesthetics but also increases the rate of fights and injuries among the male guppies. The increasing territorial aggression, coupled with mating frustration, will lead to bullying and biting.

Guppies are highly sexual beings—especially males. Thus, in the absence of a female to mate with, male guppies are bound to be frustrated, which they’ll take out on each other. Likewise, other behavioral issues like territorial aggression will also surface in otherwise docile guppies.

And given their love for nipping and biting, there will be many torn tails and fins in the aquarium. If these injuries do not receive immediate medical intervention, an infection will catch up soon.

Thus if you notice an injured male guppy, it’s best to put him in a quarantine tank until he gets better.

Can I Only Keep Female Guppies?

It’s rare that people only keep female guppies because they simply aren’t as attractive as male guppies. However, it’s entirely possible and offers a few benefits along the way. For starters, there’ll no bullying or harassment to mate by male guppies.

In the guppy universe, males try to court females by showing off their moves and intricate colors. However, if that doesn’t work, they often resort to bullying by harassing and nipping.

This behavior can seriously stress a female fish, who then channels this anger on other females.

Thus, the absence of males in a tank means a stress-free and calm environment for female guppies.

Still, you can’t rule out the chances of pregnancy and subsequent overproduction. That’s because female guppies could very well have been impregnated before you brought them home.

The chances are slim, but you never know.

For every one male guppy, you should have three female guppies. While some go by the 1:2 ratio, this is by far the most popular method. If you want to increase the number of guppies in the tank, you can go simply multiply the ratio.

Maintaining the right guppy male-to-female ratio is crucial. When done right, it eliminates all the problems we talked about above, such as overpopulation, territorial aggression, harassment, and injuries.

Now you may wonder how much water does each guppy need. The rule of thumb is at least 2 gallons per guppy, but they end up needing more.

For a more detailed guide on the perfect ratio, check out this article!

Which Other Fish Can I Keep in a Guppy Tank?

As prized as your guppy is, they fall under the category of feeder fish in the food chain. Thus, you have to be selective of their mates. Some species that guppies get along with are platies, swordtails, cory catfish, mollies, honey gourami, cardinal tetras, and otocinclus catfish.

Guppies are amicable creatures that get along with almost everyone. Given their petite size, other fish won’t confuse them for predators and act hostile.

Which Fish Species Should I Avoid In A Guppy Tank?

Given a guppy’s small size and bright colors, they’re among predators’ favorite food. You should never put guppies with cichlids, leopard bush fish, goldfish, angelfish, and clown knife fish. These fish are considerably bigger than guppies in size and wouldn’t mind gobbling them up.

Smaller goldfish like twisty tailed and chalily can get along with guppies quite well. Still, the bigger species like orandas, fantails, and ranchus can take down a guppy in a single bite.

Likewise, a big angelfish can quickly gobble down a guppy, while leopard bush fish are notorious for snacking on guppies.

Now, all big fish may not snack on guppies, but their mere presence can be the source of acute stress. There will also be a lot of bullying, nipping, and biting going around. All of these only spell trouble for your guppy.

And while some fish pose risks to guppies, almost all community fish love to consume guppy fry. So, if you’re trying to raise the fry, move the pregnant guppies to a separate tank so that they can give birth.

And once the fry are born, don’t forget to remove the mother guppies as well since they tend to eat their own fry.

Find the comprehensive list of a guppy’s archenemies here!

Conclusion On Can Guppies Live Alone

Answering can guppies live alone is tricky because there’s no one correct answer. In terms of survival, yes, guppies can live along for a long time. However, secluded guppies don’t lead a very active and happy life.

Researches have shown that guppies need a lot of stimulation to relieve stress and boost growth brain development. When kept alone in a tank, there’s rarely anything that’s exciting or stimulating.

Thus, you should always try to keep multiple guppies instead of one. To do so, you have to keep at least three female guppies for every one male. This ratio helps to alleviate problems like territorial aggression, overpopulation, and harassment.

Do Guppies Sleep? | Your Ultimate Guide on Guppy’s Sleep Cycle