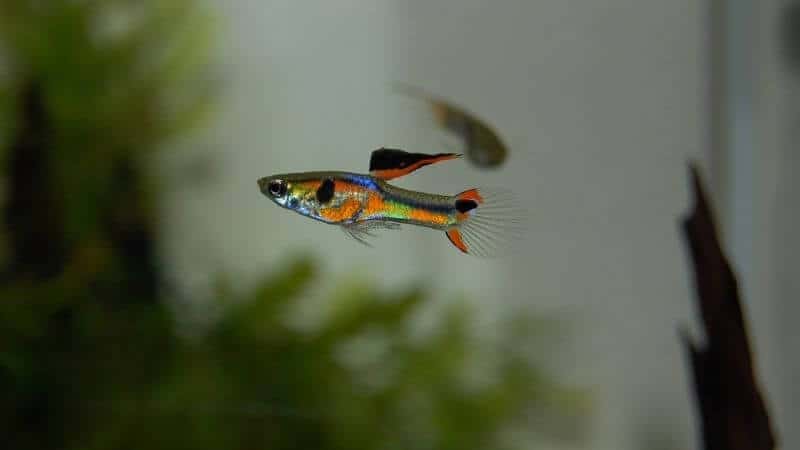 Guppies are natives to the tropical waters of the Caribbean, like Trinidad and Tobago. They’re also found in tropical bodies across South America, like Venezuela, Guyana, and Brazil. So, you might wonder, can guppies live in saltwater or not.

So, Can Guppies Live in Saltwater Aquarium?

While guppies are mostly famous as freshwater aquarium fish, their natural habitat is brackish water. The ideal salinity level for guppies would be around one tablespoon for 5 US gallons which clearly suggests that they can live in saltwater aquarium.

Whether or not can guppies live in saltwater aquariums can be easily guessed because they can withstand levels of salinity up to 150% that of normal seawater.

Due to this impeccable quality, guppies are also often kept in marine tanks.

Do Guppies Need a Saltwater Tank?

Guppies can accommodate most water parameters, whether they’re freshwater, saltwater, or brackish water.

So, they don’t necessarily need a saltwater tank but can undoubtedly thrive in one.

Can guppies live in saltwater or not boil down to the kind of water they lived in before you brought them in the house.

If they were raised in water with high mineral or saline concentration, it’s best to keep them in saltwater or brackish water tanks.

However, make sure the amount of salt or other minerals in the water is in moderation. Otherwise, it can lead to fatal kidney complications.

How Do Guppies Survive in Saltwater Aquarium?

Like most other fish, your guppies will filter out the saltwater through the specialized cells in its gills. The salt content is flown continuously out of the fish’s gills.

Similarly, they’ll also pump out the access salt through their kidney.

How Do I Prepare Brackish Water for My Guppies?

Guppies live in brackish water in the wild.

If you’re interested in creating an environment for them that’s closest to home, as much as possible, here’s a step-by-step explanation on how to achieve that.

Glass or acrylic tanks are suitable choices for a brackish water tank. Since the water level contains iodine, don’t use tanks with metal frames, hoods, or any other accessories made with metal. It will lead to corrosiveness.

Fill a clean bucket with tap water. If the tap water is chlorinated, you will have to condition it before you add salt. Leave some space at the top as the water level will rise once you add salt.

Pour in the proper amount of marine salt into the bucket as instructed by the manufacturer. Using freshwater aquarium salt or table salt will not yield the desired results.

Stir the water so that salt dilutes properly. Based on the amount you’ve added and the water’s temperature, it may need several hours of continuous stirring. You can let the mixture sit for 20 minutes and stir it once again.

Use a hydrometer to check the water’s gravity to make sure that you have achieved the right salinity level. Brackish water’s density ranges from 1.003 to 1.010. Guppies prefer water density on the lower spectrum of that scale; make adjustments as necessary.

For the final step, gently transfer the water from the bucket to the tank. Note that it will take at least a week for the water to complete its nitrogen cycle. So, don’t add fish until then.

How to Acclimatize Guppies from Freshwater Tank to Saltwater Tank?

If your guppies are used to a freshwater tank, you need to introduce them to new water conditions slowly. It will take over several weeks – so, be patient!

Once or twice every week, take out about 20% of the freshwater and replace it with a saltwater mix—increasing the gravity levels by about 0.02 per week. That way, your guppies won’t be shocked or harmed – leading to happy saltwater guppies.

What Tank Size is Best to Set up Brackish Fish Tank?

There is no one hard and fast rule when deciding what size is the best when setting up a brackish water tank.

However, a bigger aquarium is less temperamental than little ones, in addition to holding more fishes for your social guppies. So, I’d recommend a minimum size of 20 gallons.

How to Decorate Brackish Fish Tank for Guppies?

You can use crushed coral gravel or coral sand for the substrate. This will help to maintain the correct pH and alkaline levels without additional work.

You can also use gravel, pebbles, and stones as these are naturally occurring elements in a brackish water setting.

If you’re going to use driftwood, use it sparingly as some driftwoods can lower the water’s pH and alkaline levels.

As plants and salt don’t go well, you’re better off using artificial plants. Ensure that the artificial plants you buy aren’t made of hard plastic, have sharp edges, or are supported by wires.

If you want to get live plants, Anacharis, African Anubias, and Hygrophila are a few options.

Don’t confuse the colorful, delicate fins for fragility. Guppies are relatively hardy fish, and there’s more to them than what meets the eye.

Guppies can thrive in both freshwater and saltwater aquarium, as long as you’re a regular at maintenance. Since they can tolerate high salinity levels in the water, some fish parents even raise them in a marine tank.

So, that being said, some specific parameters are best suited for a guppy.

Final Words on Can Guppies Live in Saltwater

Guppies are neither freshwater nor saltwater fish – they’re native to the brackish water of the tropics.

However, guppies can live in a saltwater aquarium. The aquarium salinity should be maintained between 1.003 and 1.010. If it’s a tank exclusive for guppies, you can opt for the lower spectrum. But since guppies are hardy fish, it won’t matter if the salinity level is slightly higher. Just slightly.

Most fish parents keep guppies in a freshwater tank as they’re more manageable and more affordable to take care of.

If you have decided to transfer your guppies from a freshwater tank to saltwater or brackish water aquarium, it should be carried out over several weeks. You have to replace about 20% of freshwater with saltwater every week or so.

If you wanna know more about keeping guppies as a pet, here’s a guide on keeping guppy in an aquarium.