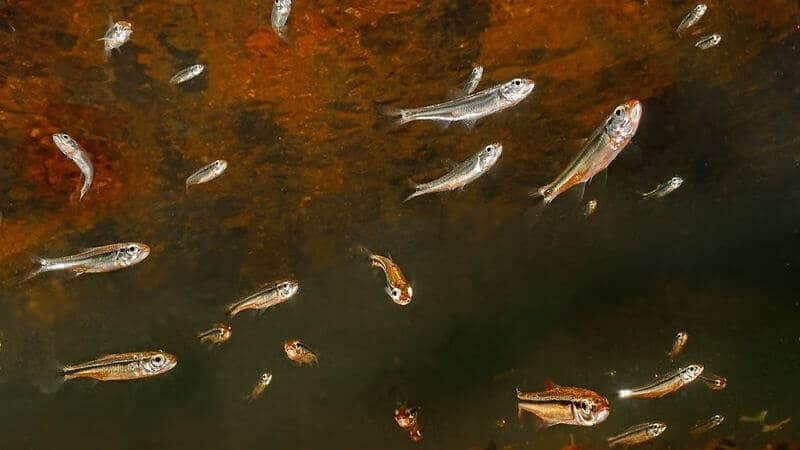 We seldom think of minnows as anything other than fish food. And let’s be honest – we aren’t usually willing to put much thought into what goes into their stomachs. I’ve even had users asking me if it’s okay to give them dog food!

Minnows aren’t picky when it comes to food. So, luckily, there’s a wide variety of food to choose from. And that brings me to our question of the day – can minnows eat goldfish flakes?

In this blog, I’ll answer that and shed some light on readily available food options they can have.

I looked up dozens of brands and studied their nutrition charts. And what I found is that all of them pretty much have the same nutrient concentration. They’re all super rich in protein and have a fair amount of fat, fibre, and ash.

These commercial pellets are also enriched with vitamin A, B6, B12, D3, E, and ascorbic acid.

If you’re interested, here’s the link to the goldfish food I occasionally give my minnows:

Yes, as a matter of fact, minnows do eat goldfish waste if it’s available. While it may save you some cleaning time, please don’t assume they can sustain solely on goldfish waste.

They still need to have other nutritious food to lead a healthy life.

Now, let’s look at what else do minnows eat!

Minnow’s Diet In The Wild

In the wild, minnows’ diet varies depending on where they live. A freshwater minnow’s diet mainly consists of small bugs like flies and mosquitoes. They also rely on plants, dead animal matter, and algae/

On the other hand, a saltwater minnow’s diet is mainly made up of brine shrimp.

And lastly, some food that both freshwater and saltwater minnows consume are zooplankton, phytoplankton, small fish, and fish eggs.

The easiest food to feed minnows in captivity is tropical fish flakes or goldfish flakes. Other great options are frozen bloodworms and tubifex. – they love it. If you raise minnows in the pond, phytoplankton will make an excellent food source.

To encourage phytoplankton and algae bloom, make sure to condition the water with phosphorus plant fertilizer (1-2 tablespoons per 100 gallons).

While most minnows accept practically anything you give them, some can be picky about what they intake – especially saltwater minnows.

If your minnows are avoiding flake food, try feeding 50% flake food and 50% brine shrimp until they develop a taste for flake food.

How Often And How Much To Feed Minnows?

The best practice is to give minnows two small meals a day instead of one big meal. Twice a day, provide them with the food they can finish within 4-5 minutes. If it takes longer than that, it means you’re overfeeding your minnows.

If you are interested to know more about what different kinds of minnows eat, here’s a link to an in-depth article on the subject.

And if you want to know what eats minnows, we’ve covered that too! Just head over here.

Yes, goldfish will readily eat minnows if they’re available. Goldfish grow considerably larger than minnows, and they have a strong predatory instinct towards anything smaller than them.

So, if you’re not looking to save your minnows to use them as bait or for some other reason, you shouldn’t house them in the same habitat as goldfish.

But if you have to keep them together, make sure that the space is large enough and includes plenty of live plants. Even then, expect some extent of predation – it’s only natural.

It’s a common practice to give minnows bread or breadcrumbs. But this convenience can cost you dearly. Occasionally giving bread/breadcrumbs doesn’t pose much risk, but if you make it a habit, it can cause the fish’s intestine to swell fatally.

This applies to almost all food with yeast, grains, and cornmeal.

Yes, minnows can eat cornmeal as long as the salt content in it isn’t too high. However, since cornmeal isn’t something they consume in the wild, don’t forget to channel moderation when giving this food.

If you’re interested, here’s the link to my go-to tropical flakes:

Minnows will choose bloodworms over and over again if they have the chance. However, it’s best if you give it in moderation as occasional treats.

The crude protein content in bloodworms is 55.62%, and the crude fat content is 9.7%. So, bloodworms make delicious and nutritious treats for minnows.

Minnows may eat dog food without hesitation, but it doesn’t mean you should give them dog food. Dogs and fish are two entirely different species with different nutritional needs and palates.

Here’s the tricky part. Most commercially available dog food has almost the same composition as goldfish food – protein, fiber, fat, moisture, and ash. So, maybe you can get away with feeding your minnows dog food a couple of times.

However, the ingredients used are almost poles apart. So, I wouldn’t recommend taking this risk.

Yes, minnows can eat cucumbers. One user on a forum reported that his minnows love to nibble on this veggie. But make sure that you blanch it first.

Yes, white cloud mountain minnows can safely consume goldfish food. It’s safe for them. In fact, they will readily eat a wide range of food, including frozen, live, and flake food.

In the wild, they mostly snack on insects. So, in the tank, you can give them shrimp, daphnia, flakes, mosquito larvae, and bloodworms.

Yes, rosy red minnows can eat goldfish food as part of their staple diet. Like most minnows, rosy reds are omnivores. Thus, they feed on small invertebrates, insects, and plants in the wild.

In captivity, they thrive the best on spirulina-based food. You can also fortify their diet with blanched veggies, bloodworms, and daphnia.

Here’s a quick summary of the essential bits in case you missed it.

Yes, minnows can safely eat goldfish flakes. It’s a common practice to give minnows tropical fish flakes. Just make sure the food is small enough to fit inside a minnow’s mouth.

Besides goldfish flakes, you can also give them blanched veggies like cucumber, tubifex, bloodworms, and insect larvae.

Don’t give dog food. It’ll do more harm than good. And don’t give breadcrumbs or anything that contains yeast. It will swell up the fish’s intestine and can potentially be fatal.