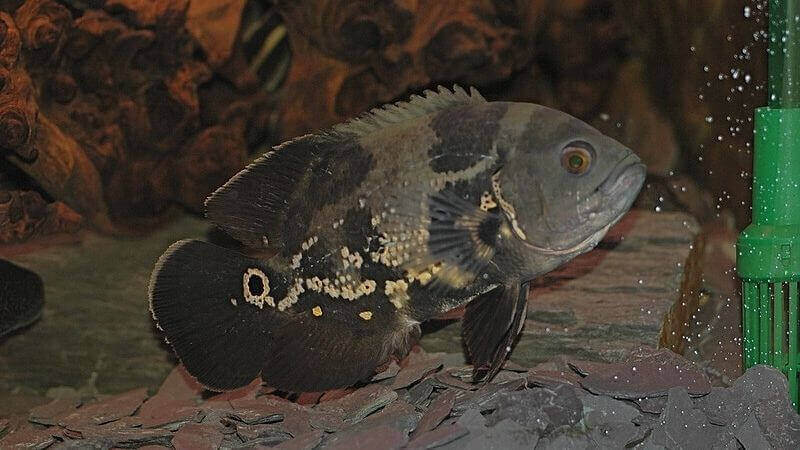 Oscars are hardy fish. But like everyone, they too have an Achilles heel. In their case, it’s the water temperature. In this blog, we will discuss can oscars live in cold water or not. I’ll also touch on what are the risks of exposing them to the wrong temperatures.

So, without further ado, let’s go!

Can Oscars Live In Cold Water?

No, oscars cannot live in cold water. They are tropical fish from the Amazonian river basin where the water’s warmer. Therefore, oscars are not accustomed to cold water. If exposed, their bodies will react negatively quickly, and it can even prove fatal.

Oscars are ectothermic creatures, which means they have no control over their body temperature. Instead, they rely on the temperature of their surroundings to regulate their metabolism and produce energy.

Thus, when it’s too cold, the fish will become less active, appetite will be suppressed, and immunity will weaken.

The suitable temperature range for oscars is somewhere between 74-81°F (23-27°C). So, to give you a specific number, the ideal temperature would be somewhere around 77°F (25°C).

What Temperature Is Too Cold For Oscars?

Anything below 74°F (23°C) can be deemed too cold for oscars. But the lowest temperature they can survive in is 55°F (12°C). They will definitely not survive in such cold temperatures for long.

A hobbyist on a fish forum shared that when the temperature dropped to 60°F (15°C) due to power failure, his oscars began to swim in weird patterns and looked deluded.

Luckily, the power came back soon, and all of his fish successfully made it out alive.

What Temperature Is Too Hot For Oscars?

Anything above 81°F (27°C) can be considered too hot for oscars. If the temperature goes higher than this, they might not show an immediate reaction, but they will eventually suffocate from lack of oxygen.

Hot water temperature has one more disadvantage. It will demolish the good bacteria colony, leading to an ammonia spike in the tank, which will naturally harm your fish.

For good bacteria, the optimum temperature range is somewhere between 65-85°F (18-29°C). So, anything hotter than that will kill them.

What Happens If The Temperature Is Too Cold For Oscars?

For tropical fish like oscars, exposure to lower temperatures can invite a plethora of complications. First, the fish’s metabolism will slow down drastically, making it passive. The fish will also get stressed. Over time, your oscar’s immunity will be compromised, and the fish will succumb to secondary illnesses.

When the mercury drops, the fish’s metabolism will also naturally decline. As a result, your oscar’s ability to convert food into energy will decrease. And eventually, the fish will become tired and worn down.

Your fish may then retreat to a quiet corner in the tank or lay motionlessly at the bottom.

Your oscar can be fit as a fiddle and still react negatively to even the slightest change in the environment. Like all fish, oscars don’t cope too well with changes in the water parameters.

So, if the temperature drops suddenly, they will naturally get stressed. As a result, the fish will produce a stress hormone called cortisol in excess, which can suppress appetite and slow down metabolism.

Some signs of stress in oscars are:

In fish, the stress level is directly linked to immunity. So if your oscar is stressed due to a sudden drop in temperature, it’s only a matter of time before the fish’s immune system weakens – making it susceptible to an array of diseases.

Lower metabolism, stress, and weakened immunity – you know what comes next – diseases! At any given time, whether you like it or not, tanks are infested with pathogens waiting for the right opportunity.

They can’t do much harm to a healthy and happy fish, but once your fish’s immune guard is down, they’ll quickly make their way into its body.

For example, a sudden drop in temperature is often associated with parasitic outbreaks like ick.

What Happens If The Water Is Too Hot For Oscars?

If the water is too hot for oscars, their metabolism and breathing rate will speed up in unnatural ways. As a result, they will need more oxygen. However, the problem is that warm water holds less oxygen. Thus, they will slowly but painfully suffocate to death.

When the water is warmer than usual, the fish will become more active and eat more than usual. And this is necessarily not a good thing. A hyperactive fish is not amusing.

Since fish are more active, they will need more food for more energy. And overconsumption can lead to obesity and other health complications.

This is just one example of how hot water is equally bad for oscars as cold water, if not more.

Warm water holds less oxygen. But since fish are more active in warm water, they require more oxygen. And so, your oscar will gradually suffocate.

The fish will resort to heavy breathing first to intake as much oxygen as possible. Then it will resort to the tank’s bottom, where the water is relatively cooler and comparatively more oxygenated.

And lack of oxygen isn’t the only way your fish will suffocate.

Good bacteria that maintain the tank’s ecosystem start to die at higher temperatures, leading to dangerous nitrite and ammonia spikes.

How To Increase Aquarium’s Water Temperature During Power Cuts?

People kept aquariums long before electricity was invented. So, there are a couple of ways to keep the tank heated even during power cuts. But remember, irrespective of what method you use, the process should be gradual. A sudden rise in temperatures can shock the fish and kill it.

Here are a couple of things you can do:

A sudden drop in temperature is more dangerous for fish than warm water. Aim for only about 2°F or 1°C temperature drop every 8 to 10 hours. For this, you need to take note of the tank’s temperature right from the time the heatwave starts.

Here are a couple of things you can do:

How Oscars Adapt To Temperature Changes In Wild?

In the wild, oscars primarily live in South America, throughout the Amazon and Orinoco rivers and their tributaries. And naturally, the temperature in these rivers isn’t constant. As a matter of fact, they fluctuate pretty often.

Some days the sun is scorching, while other days are cloudy. And sometimes, it rains, causing sudden temperature drops. So, how do oscars adapt to constantly changing temperatures in the wild?

First, they can quickly move from a cold area to a warmer and favorable spot if they don’t like the temperature. Second, although it may appear abrupt, these changes occur very gradually in the wild because of the colossal volumes of the water involved. As a result, the fish has a considerable amount of time to adapt and move.

How Oscars Adapt To Temperature Changes In An Aquarium?

When it comes to sudden temperature changes in an aquarium, ‘suffer’ would be a more fitting choice of word than ‘adapt’ because enclosed within the 4 walls of your tank, your fish cannot escape.

In the wild, the water temperature varies slightly or drastically in different microhabitats. However, the temperature is uniform throughout the aquarium. Therefore, your oscar cannot really move from a suffocating spot to a more comfortable one.

On top of that, temperature changes in aquarium happen a lot in a tank, giving your fish no time at all to adapt its body to sudden change.

How Long Can Oscars Live Without A Heater?

If the temperature falls within the 74-81°F (23-27°C) range, even without a heater, your oscar fish will go on to live for weeks. However, if the fish is consistently exposed to temperatures below 60°F (15°C), the fish can succumb to cold within a few days.

Remember, oscars are tropical fish. Their body isn’t wired to handle cold too well – they thrive the best in slightly warm water.

Here’s a quick look at the heater size chart below.

Find your tank’s size in the column on the left-hand side and move right to find the number of degrees the tank needs to be heated.

10 Tips To Maintain Right And Stable Temperature For Your Oscars

Heating an aquarium is pretty straightforward – at least on paper. However, there’s no room for errors. One small mistake, and you can end up electrocuting the fish.

Cutting to the chase – no, oscars cannot live in cold water. Why? They’re tropical fish. Centuries of evolution has wired them to thrive in warm temperatures.

If your oscar fish is consistently exposed to temperatures below 74-81°F (23-27°C), it will hurt your fish’s health. First, its metabolism will slow down and make it sluggish.

Second, the fish’s immunity will be compromised, and it will be prone to a host of diseases. For instance, ich outbreak is often linked with lower temperatures.

However, hot temperatures can be just as bad for your oscar, too. The fish will use up all of its energy quickly and slowly suffocate due to lack of oxygen.

So, you should always keep an eye out to maintain the right temperatures for your oscar. But remember, achieving stable temperatures is more important than fixating on one magic number.

How Big Do Jewel Cichlids Get? 4 Tips To Grow Them Fast!