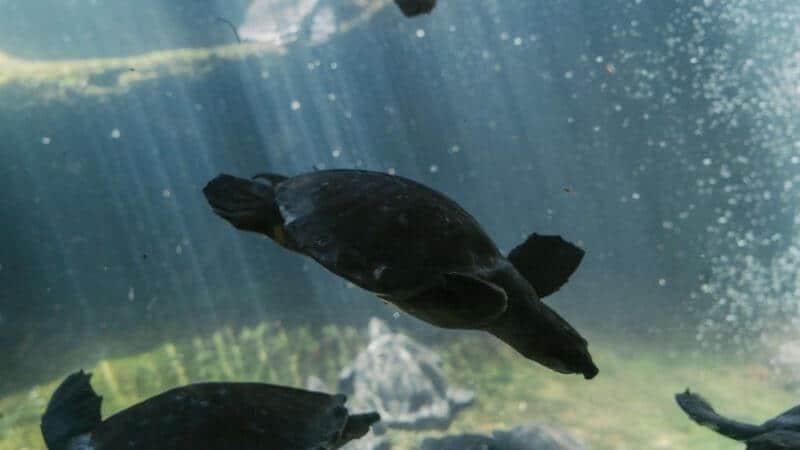 When we picture a turtle, we imagine them swimming in the blue ocean alongside the scuba divers while feeding on plankton and other fishes. But did you know that turtles, just like the whales, have to come to the surface for breathing?

Turtles do not have gills. They have lungs and have to respire through their nares, which are just right above their mouth.

Yes, turtles can drown if they get stuck underwater and cannot come up to the surface for breathing. Especially, if turtles get their legs stuck on the tank decor or the water is too deep to reach the surface in time, a turtle can drown. Sometimes, turtles also choke on the food residue underwater and will drown without ever reaching the surface.

Though they require a significantly less amount of oxygen to swim for a more extended period, they still need oxygen to breathe.

How Do Turtles Drown?

Unlike fish, turtles do not have gills to respire underwater. They are reptiles and have lungs just like us, which requires air to breathe. Though the turtles have a greater capacity to hold their breath underwater than mammals, they will ultimately have to come to the surface to breathe. And if they cannot reach the surface on time, they will drown.

Similarly, a turtle that is inside the water for hibernation can remain underwater for several months. The same goes for the activity during aestivation (however, only a few turtle species perform it).

And when the turtle lacks oxygen in its blood, it has to reach the surface for breathing. During this stage, if any obstacles are preventing it from reaching the surface, the turtle will suffocate and drown.

Some of these reasons for the drowning of a turtle are:

Decors Inside The Aquarium

Sometimes, the playthings which we think might be a good sport for turtles could cause fatal accidents. These items can tangle your turtle in unexpected places and pin him underwater until the turtle runs out of breath.

Weeds and other aquatic shrubs could also trap your turtle underneath and might suffocate it. Plants with prolific growth rates can swamp up the entire tank and might cause such accidents.

Turtles are clumsy creatures and could cause themselves to be flipped over on their back. When this happens, a turtle will have a hard time getting itself upright—trying too hard to flip results in the fast depletion of oxygen in its body. This triggers anaerobic respiration so that the turtle will produce lactic acid as an oxygen alternative. Unfortunately, lactic acid is toxic to turtles, resulting in asphyxiation in them, and the turtle could die instantly.

Most freshwater turtles prefer shallow and longer tanks. This lets them enjoy the space for swimming. A deeper tank, however, isn’t suitable for baby turtles. Once they swim to the bottom, they might not have enough energy to return to the surface. And when they panic, the frantic swimming starts. This further leads to quick depletion of oxygen in their body. So a turtle might drown because of this.

Choking can be a cause for a turtle to drown in a tank. Turtles like to forage through debris, and sometimes frenzy eating while in deep water can lead to choking in a turtle. Had it been on the surface, the turtle could easily reach the basking area and sort it out. But, when this occurs underwater, they can drown, unable to reach the surface for oxygen.

How To Know If Your Turtle Has Drowned And Died?

Although the case of a turtle drowning is rare, it can happen to anyone. A drowned turtle won’t show any activity and won’t move from its place.

If you found out that your turtle has just drowned, you shouldn’t turn the turtle upside down immediately. This may cause your turtle to be unable to breathe that last bit of air left in his lungs.

Signs Of A Drowned Turtle

After a few moments of drowning, a turtle dies due to a lack of oxygen. Dead turtles will float to the surface because of the build-up of gas in their body. But you shouldn’t mistake a turtle floating for fun as a dead turtle.

For checking, you can push your floating turtle inside the water and see if it sinks to the bottom or halfway. An alive turtle will sink and go underwater, whereas a dead turtle will bounce right back on the surface.

Your turtle could sleep underwater, and you might mistake it for drowning. To check whether your turtle is sleeping or drowned, poke him with your finger or with anything softly. If he shows movement like hiding his head inside his shell, then your turtle is just resting or sleeping underwater. If there’s no locomotion of hands, legs or head, then he could be possibly dead.

If you suspect your turtle being drowned and dead, place him on a flat surface and keep pushing and pulling its leg. This might help him push the water from his lungs.

If you see other fishes and tank mates, gathering nearby your suspected drowned turtle, it often means that there’s something wrong with the turtle, and drowning could be a cause.

If the turtle doesn’t show any movement, you need to place it on the basking spot and check for other signs. Look carefully at its part between the neck and frontal limbs. This is the area where his lungs are. If you see movement like inhaling and exhaling in this region, then your turtle is alive. If not, then it is probably dead.

How Long Does It Take For A Turtle To Drown?

It takes approximately ten minutes for a turtle to drown. A frantic turtle gasping for air cannot hold its breath for much longer and will drown in a moment. This usually happens when a turtle feels it has been trapped and won’t reach the surface when it needs air.

However, the time for a turtle to drown varies on several factors. One reason is the temperature of the water. If the tank water has a higher temperature, the metabolism in a turtle’s system will increase. This means that the turtle needs more oxygen than usual. This results in faster drowning of a turtle. But if the water has a lesser temperature, then the metabolism will be slow, and the turtle will take a longer time to drown.

Even if the turtle drowned several hours ago, it could still be alive. So, find ways to revive your drowned turtle instead of sobbing in misery.

Why Do Turtles Not Drown During Hibernation?

Turtles hibernate to keep their body warm during winter. During hibernation, a turtle will decimate its metabolism. Its heart will beat 2 to 3 times in a minute. So the use of oxygen for the bodily function is so low that the required oxygen for a turtle to survive during hibernation can be sufficed through its peculiar breathing, through its cloacae or commonly known as butt-breathing.

How To Revive A Drowned Turtle?

A drowned turtle might be alive for 12 hours, even after drowning. So reviving is possible if you opt for the right measures.

The fact that turtles can stay alive for several hours without oxygen. So, a drowned turtle has a higher chance of being revived.

Things you need to remember is that you should never flip the turtle on its back. A turtle that has inhaled water while drowning can still have some air present in its lungs. And when you flip the drowned turtle, the air in its lungs will dissipate from its body, and breathing becomes even hard for your turtle.

So, taking it to the vet immediately is the right option. However, if you want to act immediately, here is how you revive a drowned turtle.

Here’s why you should take your revived turtle to a vet immediately.

You should take your drowned turtle to a vet immediately because further complications usually occur in such cases. One of the prominent complications is Pneumonia. Another is a respiratory infection.

So you need to take your revived turtle to the vet immediately.

What your vet will do is administer antibiotics to fight the cold. Also, the antibiotics help soak out the water if it is still inside the turtle’s lungs. Only after this, the vets will start giving oxygen.

Often the vets will put a tiny tube through the mouth of the turtle and supply pure oxygen. It helps replenish the scarce oxygen present in your turtle’s body.

With baby turtles, reviving them can be challenging. So, if you have a baby turtle or younger ones, then you need to hasten.

Yes, sea turtles can drown when they are entangled in a fishing net or a ghost net. So because of human’s cause, the sea turtles, despite having the ability to survive underwater for the longest in the turtle family, do drown. However, they won’t die instantly after drowning. They will go into a coma, and there is a 50% chance of their revival.

How Long Can A Red-Eared Slider Turtle Stay Underwater?

A red-eared slider turtle can hold its breath for 30 to 40 minutes underwater. However, if the water is cold, they can drop their metabolism rate and stay for a much more extended period. During activities like sleeping, they can hold their breath for several hours.

How Long Can A Box Turtle Stay Underwater?

A box turtle is a terrestrial turtle, so it cannot hold its breath like other aquatic turtles. But they can still hold their breath for about 20 minutes underwater.

Among the freshwater species, painted turtles are known to stay the longest underwater. They can hold their breath for a couple of hours without coming to the surface for breathing. Factors like the temperature of the water also affect the duration a turtle can stay underwater.

Do Turtles Drown While Sleeping?

No, turtles do not drown while sleeping. They have evolved over millions of years and are well adapted to underwater sleeping. However, if they get stuck underwater and cannot come to the surface, they might drown.

Do Turtles Drown During Hibernation?

No, turtles do not drown during hibernation. Before going into hibernation, their body metabolism rate decreases at such a low rate that they can survive without breathing for several months. They also breathe through their butts (cloacae) during hibernation.

Turtle and Fish Together? These 3 Species Can Be Your Best Bet!

Do Red-Eared Sliders Bite? Be Careful In These 6 Situations!