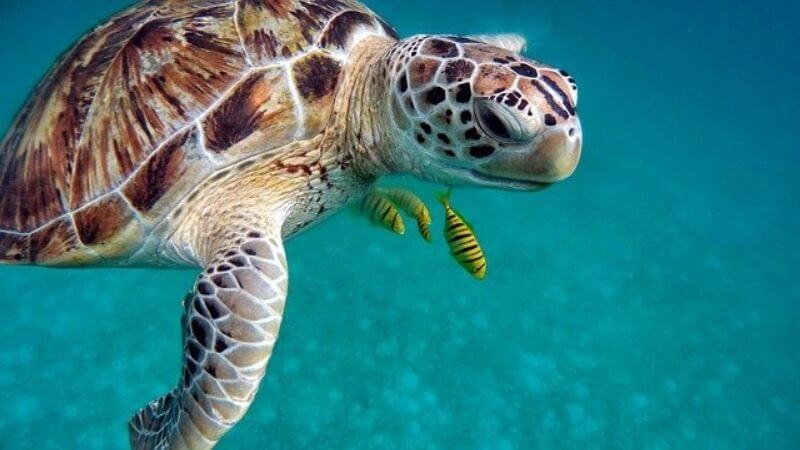 The drastic plummet in the sea turtle population has invited numerous problems – one of which is the increase in the jellyfish population.

Except for sea turtles, there aren’t many predators that consume jellyfish. So, now that jellyfish are in abundance, turtles consume more of them as they are easy to find.

Crush is a 150 years old turtle who gives an impression of Sean Penn, the high dude from the movie Fast times at Ridgemont High.

This gave rise to the famous hypothesis that sea turtles get high after consuming jellyfish.

So, is it true that sea turtles get high? What about them getting high after eating jellyfish?

Can Sea Turtles Get High?

This means that ingesting food with cannabinoid properties can make a sea turtle high.

Food containing cannabinoids binds with both CB1 and CB2 receptors. It thus alters a sea turtle’s thinking, memory, concentration, and perception of pleasure and pain.

There aren’t many plants that have cannabinoids in them. And such plants are even rarer in marine vegetation. However, liverwort, a tropical plant, has cannabinol properties.

It has been speculated that sea turtles get high after consuming liverwort in significant quantities.

However, there’s no concrete evidence to support this claim.

Here’s An Interesting Reading: Can Turtles Get High? Here’s Why You Shouldn’t Get High In Your Turtle’s Presence

Can Sea Turtles Get High From Eating Jellyfish?

Though jellyfish make up a large portion of a sea turtle’s diet, they do not have any chemical compounds in their body to make turtles high. So, the internet buzz surrounding this topic is entirely false.

So, What Could Be The Reason Behind People Believing This Rumor?

Jellyfish have venomous stinging cells called nematocysts in their tentacles. They release these poisonous stinging cells onto their prey or predator, depending on the situation. Therefore, people might conclude that eating the venomous jellyfish can make turtles high.

But, this isn’t true.

Let me tell you why.

The sting from jellyfish can penetrate human skin and instantly inject toxic venoms. The person will then experience symptoms like difficulty breathing, chest pain, muscle cramps, skin blisters, nausea, and difficulty in swallowing.

However, the anatomy of turtles is much different from ours. For example, they have scales on their skin, and unlike freshwater turtles, they have beaks instead of a lipped mouth.

So, the stings from jellyfish are not going to affect them in any way.

But what about their throat? Or their stomach? Won’t digesting such poisonous creatures affect a turtle’s stomach?

Again, anatomy plays a crucial role. Turtles have papillae, spike-like growth inside their mouth, protecting them from jellyfish stings.

They also have a differently-built stomach that can digest poisonous jellyfish.

How Does A Sea Turtle Eat Jellyfish Without Getting Stung?

Sea turtles have several advantages over jellyfish. Their sharp beak, papillae, and fortified shell help them eat a jellyfish without getting stung.

Unlike freshwater turtles, who have lipped-mouth, sea turtles have a razor-like beak that helps them tear the gooey body of a jellyfish apart.

Also, the skin on the side of their beak is thick enough to endure jellyfish stings.

It might seem like the only vulnerable spot to attack a turtle is its eye. However, turtles close their upper eyelids while chomping on jellyfish.

Despite closing their eyes, turtles can still see through the nictitating membrane. So though they won’t have a 20/20 vision when their eyes are covered with a membrane, they will still be able to spot their prey.

Sea turtles have papillae, the spike-like projections of keratin that point inward towards the stomach.

They are present all over the esophagus of a turtle’s mouth. Its primary function is to trap food while expelling excess water before swallowing.

Furthermore, they also help reduce the impact of stings from jellyfish while swallowing.

Jellyfish stings are useless in front of a sea turtle’s hardened shell. Though turtles have nerve endings on their shell, the jellyfish stings will not be felt by turtles.

Final Words On Can Sea Turtles Get High

Sea turtles and all turtles have cannabinoid receptors, making them susceptible to psychoactive agents.

However, there haven’t been any cases of turtles getting high by eating liverworts or any species of jellyfish in the ocean.

These rumors of sea turtles getting high by eating jellyfish are there. Still, empirical evidence has yet to come to the surface.