Can Shrimp Live With Betta? Learn From My Experience! 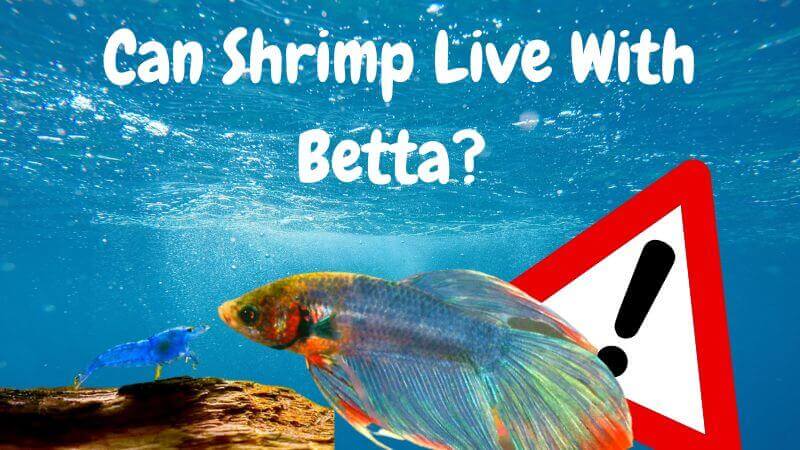 Bettas are carnivores with a complete set of teeth in their jaws. Shrimps are tiny, delicate, and weak. Can they live together? It’s tricky to answer.

Some people occasionally give bettas whole shrimp as a live meal. But then there are also folks who raise shrimps and betta in the same enclosure. What’s the deal? It depends.

I wish I could answer your question right off the bat – a simple yes or a no. I hate beating around the bush, but here we are. Some queries like this demand very subjective and ambiguous answers.

Can Shrimp Live With Betta?

On paper, yes – a shrimp can live with betta since they require nearly identical water parameters. But whether a shrimp can survive living with a betta depends entirely on the fish’s temperament. I know that’s a very cryptic answer, but it is what it is!

So, yes! It all boils down to how hotheaded your betta is. I’ve had cases where the betta gulped down the shrimp whole. And I’ve also seen them live like two peas in a pod.

The fact that shrimps are inexpensive is why most hobbyists, including myself, have no qualms when a shrimp get eaten. Now top it with their prolific reproductive ability, and voila, they become even more invaluable.

Since bettas eat and swim at the top most of the time, some hobbyists argue that bottom-feeding crustaceans can live in the same tank as the carnivore fish.

Well, if that’s true, it’s good news, but it’s not always true. For instance, My teal betta, Sagar, would occasionally venture down to harass bottom-dwellers.

If you plan to add shrimps to the betta tank, you must prepare for the worst. Don’t wear your heart on your sleeves – the shrimp may get eaten any day.

You should also be okay with setting up 2 tanks if the need arises.

The most commonly kept freshwater shrimps are Amano shrimp, ghost shrimp, cherry shrimp, and bumblebee shrimp. None of these critters grow any longer than 2 inches.

Needless to say, a betta, with its formidable shape and extravagant fins, is many times bigger than any of these shrimp.

Look at this video for size reference. A betta fish is tearing a cherry shrimp apart and eating it.

If you’re not too big on raising shrimps, you can try adding a cory catfish. Want more? Check out this article for more options.

Below, I’ll lay down a couple of factors that play key roles in stacking the odds for successful cohabitation.

How To Keep Shrimp And Betta In The Same Tank?

Getting a big fish tank in the first place and creating plenty of hideouts drastically increases the possibility of cohabitation. Ensuring the betta is well-fed at all times also goes a long way in protecting the shrimps.

There are two very strong reasons you should invest in a big tank if you want to keep shrimps and betta fish together.

For starters, bettas are highly territorial and don’t mind lashing out at assumed trespassers. Thus, it would be best to prioritize allocating enough space for the betta first and foremost.

Second, shrimps should live in groups. And a big group of shrimps will naturally require more space.

I wouldn’t suggest anything smaller than 10 gallons. It’s the bare minimum requirement.

A Lot Of Plants

Bettas like plants, a lot of them. These unsociable fish like to hide amongst the plants most of the time. They’re even known to sleep on big leaves – look at them viral photos.

Anyway, the point is that bettas become stressed and irritable when there are no plants.

And it’s obviously dangerous to have an angry betta and tiny and delectable shrimps in the same enclosure.

My go-to plant for a betta tank is the java fern. Its thick and long leaves provide enough volume for bettas to feel safe. Anubias, betta bulb, and water sprite are also excellent choices.

Here’s a round-up of the best plants for a betta fish.

Bettas are shy. And shrimps, well, they’re just vulnerable. So, both parties would benefit quite a lot from hiding places.

As you already know, shrimps have to molt to grow. They shed their exoskeleton once every month or so and grow a new one. During this time, they’re highly vulnerable to external attacks.

Creating hideouts using PVC pipes is a nifty way to let the shrimps molt in peace. If a hungry betta comes across molting shrimp, the shrimp will turn into a gourmet meal.

You can also create hideouts using plants, rocks, and caves. Experiment and have fun!

Check out this list of best decorations for bettas – it features some awesome hideouts.

It’s no secret that bettas are the most territorial freshwater fish we know. However, you can outsmart them super easily with a simple trick.

First of all, safely remove the betta from the tank. Next, rearrange the tank and add the shrimps. Once the shrimps are settled, add the betta.

If you had added the shrimps to an already established tank, the betta would undoubtedly go charge at the shrimps head-first. However, when you change the layout and add the shrimps first, the betta becomes confused and remains relatively more docile.

You can get away with feeding a betta once a day, but if you keep it together with shrimps, increase the frequency to two.

Make a point to give your betta readymade food like pellets and freeze-dried food like bloodworms twice a day. Otherwise, your shrimps will become live food before you know it.

I wouldn’t recommend giving live food to your betta as it can encourage their hunting instinct. You definitely don’t want that in a tank housing barely inch-long shrimps.

Some hobbyists regularly give their bettas breadcrumbs for meal. Is it safe? Find out here.

Okay, now, this point might seem ludicrous but hear me out.

When you’re out shopping for betta fish, observe all the fish for some time. Then, choose the one that seems the most docile and doesn’t flare too often.

I know you can’t judge a book by its cover, but there’s nothing to lose when doing as I say. You just might select the most peaceful betta!

When introducing the betta to the shrimps for the first time, let the fish live inside the breeding box for at least a couple of days. Don’t worry – it’s completely safe.

Observe how often the betta flares and how it reacts at the sight of shrimps. In a couple of days, the betta will get used to having shrimps’ company. Once you’re sure of it, you can remove the fish from the breeding box.

You can also analyze the shrimp’s behavior. Watch if the shrimps hesitate to emerge from the hideouts and scavenge for food. If they hold back, know that the betta has scared them out of their wits.

How Did I Raise Shrimp And Betta In The Same Tank?

I don’t mean to sing my own praises, but I have successfully kept shrimps alongside a single male betta and a sorority (I’ve had a fair share of failures too). As I mentioned above, getting a big tank, adding tons of hiding places and plants, and keeping the fish well-fed all the time did help in preventing butchery in my fish tank.

Having said that, I also knew that all my bettas were docile enough to not harm the shrimps. Regardless of male or female, my bettas had previous experience sharing the room with smaller critters. And that really played the part.

On the occasions when the bettas ripped and swallowed shrimps, I was gravely at fall. The first time, the tank was small. It was only a 5-gallon tank. The second time, there were not enough hideouts. But, nathless, we cannot ignore that my bettas had a strong predatory instinct both times.