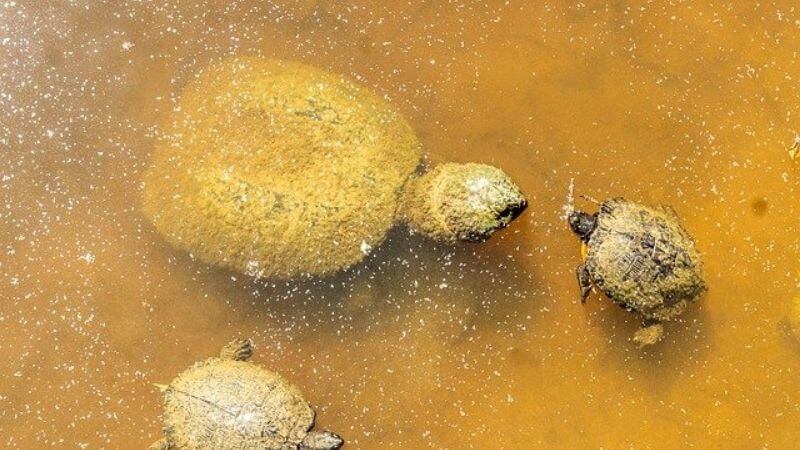 Since 2012, more than 7500 reports of snapping turtles crossing the road have been reported all over the US. You might have also encountered snapping turtles wandering on roads and highways.

These frequent encounters with this particular species might lead you to believe that they spend more time on land than water. But is it true? If that’s true, you might also take them to be lousy swimmers, just like the box turtles.

So, in this episode, we will find out how good snapping turtles are at swimming. Let’s begin.

Yes, snapping turtles can swim like most aquatic and semi-aquatic turtles. On average, they can swim about 8 -10 miles per hour. However, even the Olympian Michael Phelps could only clock in about 6 miles an hour. This reveals how good snapping turtles are at swimming.

But, despite swimming at twice the speed than the best of us, they are still considered slow swimmers compared to other aquatic turtles.

Snapping turtles spend most of their time in the water. They like to live in brackish and muddy waters. They like to bury themselves in the mud or sand and can stay up to three hours underwater without the need to reach the surface for breathing.

How Does A Snapping Turtle Swim?

The streamlined body of snapping turtles helps them stay afloat in water. They have webbed feet, which they use like paddles to propel themselves inside water. They use all four stocky limbs for swimming in the water and walking when on land.

Although webbed feet aren’t as efficient as sea turtles’ flippers, they can still cover a decent distance.

Why Do Snapping Turtles Swim?

Just like every other turtle, snapping turtles also swim to catch their prey or rummage for food. However, alligator snapping turtles are known to hide and wait in the mud for their prey to approach. They wait steadily like the alligators and crocodiles. Then, they will snap at lightning speed when the prey looms nearby.

What Do Snapping Turtles Do Underwater?

Snapping turtles mainly walk at the bottom and bury themselves under the sand and mud. Then, they bury their whole body and open their mouth, and wiggle their tongue. This is done to lure fishes and other prey.

Preys fall for the bait thinking that the snapping turtle’s tongue is a worm. And right when the prey enters its mouth, it locks its powerful jaws, and the prey is devoured.

Another interesting fact about snapping turtles is that they do not need to bask like other turtles. Even when they have to bask, they will float on the surface of water or lounge in muddy places.

Unlike other turtles who gain vitamin D through basking, snapping turtles obtain it through their diet. However, you shouldn’t refrain your snapping turtle from basking.

Babies and juvenile snapping turtles can be easily housed in a 20 to 55-gallon tank when it comes to the tank requirements. However, snapping turtles eventually reach more than 12 inches in length.

Turtles require 10 gallons per inch – so based on that, an adult snapping turtle requires at least a 120-gallon tank.

It is a common practice to keep adult snapping turtles outdoors. You can make an outdoor pond or get a stock pond. Stock ponds are budget-friendly and easier to maintain than outdoor ponds.

Snapping turtles aren’t fond of deep waters. Instead, they like to dwell in shallow waters. So, make sure you fill water only about one and a half feet deep.

Keep driftwoods and decors like rocks to mimic their natural habitat.

Snapping turtles breathe through their cloaca and stay up to three hours underwater before they swim to the surface for air. This kind of respiration is termed cloacal respiration.

You might wonder what a cloaca is? It is a dual-purpose organ located under the turtle’s tail. Waste gets excreted through the cloaca, and it also acts as a reproductive organ.

Cloaca is made up of blood vessels, making it one of the efficient organs to absorb oxygen.

But when in dire need of oxygen, especially during hibernation, snapping turtles rely on a slightly different way of intaking oxygen than cloacal respiration. It is called cutaneous respiration.

This process exchanges gases by running water through the turtle’s scale and skin while absorbing oxygen as it passes.

But, if snapping turtles spend so much time in the water, how come we see them on the land so often?

Why Are Snapping Turtles Seen On Land?

Snapping turtles spend most of their time in water and only come outside when they have to lay eggs. This is why we only get to see adult snapping turtles crossing roads.

Why Are Snapping Turtles Seen On Roads?

There is gravel on the side of the roads. Gravel is mushy, unlike roads, making it a snapping turtle’s favorite place to dig in and hide their eggs.

Snapping turtles come out of the water during the onset of April. They will walk for days in search of dry, sandy land to make nests. And that’s why you see them trying to cross roads.

Once a female finds a suitable place, which is usually on the sides of the roads, she will dig a shallow concave container-shaped nest. She will then lay around 40 – 50 eggs. Some can lay over 100 eggs in a single clutch.

After laying eggs, she will make the return journey to the pond.

Snapping turtles are not known to make doting parents. They will cover the eggs with sand and leave them without any kind of protection.

This is the reason why predators like foxes and coyotes can quickly locate the nests and empty them. As a result, more than 80% of snapping turtle eggs get eaten by predators every year.

Check out this article if you want to read up more on the subject and help the turtles cross the road.

Why Are Snapping Turtles Aggressive On Land?

A snapping turtle’s best element is water. But, on land, they feel threatened as they cannot easily escape. So, they try to bite anyone who approaches to handle them. This is the reason behind their aggression on land.

But, inside water, snapping turtles do not show any discomfort or aggression. They even let you pet them while underwater.

Why aren’t Snapping Turtles Easy To Spot In Water?

Snapping turtles have stealth ability which they use to hunt for food underwater. They lurk in muddy waters to lure their prey. This is why you won’t usually spot snapping turtles in the water.

How Long Do Snapping Turtles Live?

Which Is The Fastest Swimming Turtle?

Leatherback sea turtles are the fastest swimmers in the turtle family. They can swim up to 22 miles per hour when escaping from predators like killer whales or tiger sharks.

How Fast Can A Turtle Run?

Most turtles can walk around 2 miles per hour. However, the softshell turtle can walk at the speed of 3 miles an hour. This is on par with us.

How Much Distance Can A Turtle Swim In A Day?

Sea turtles can cover over 1900 miles in 23 days which means that they can swim over 82 miles a day, and that is against the current. Impressive!

Are Wild Snapping Turtles Bigger Than Captive Ones?

The answer to this query is, “It depends.” Snapping turtles that receive excellent nutrition in their natural habitat tend to be bigger than grown in captivity. But, it can go both ways.

Though not verified, the largest snapping turtle ever found was a wild one in Kansas, which weighed over 400 pounds.

Even though some wild turtles can grow to an astounding size, the captive turtles are the ones that grow rapidly. The credit for this growth goes to the suitable water parameter and all-round diet.

Snapping turtles are one of the largest freshwater turtles in the world. Known for their biting prowess, they are also intelligent reptiles that can trick and lure prey inside water.

However, these turtles aren’t excellent swimmers. They are just average. They can swim about 8 to 10 miles an hour. But they prefer walking and lurking in murky waters.

And another interesting fact about these turtles is that they do not need to bask to absorb vitamin D.