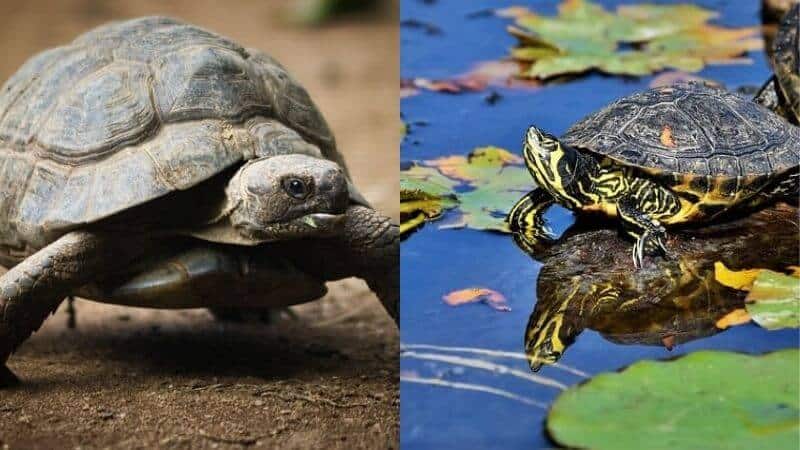 So is this all true? Let’s find out.

Can Turtles And Tortoises Mate?

No turtles and tortoises cannot mate because their genetic makeup is different from one another. Tortoises fall under the order Testudinidae, whereas turtles belong to the remaining four families of the order Testudines.

Turtles and tortoises have different genetic combinations and aren’t well suited to bear hybrid offspring. Hence the answer is no; the turtles and tortoises cannot mate. And if by any means, science progresses and aids this event, chances of health complications in the offspring will be high.

So the sight of these animals humping or stacking over one another doesn’t mean indicate mating.

What Are The Reasons Behind Turtle And Tortoise Not Mating?

Their Taxonomies Do Not Match.

There are seven main taxonomic ranks for every being.

So we need to know where these two, i.e., turtle and tortoise separated from each other, to understand why they can’t mate.

In reality, turtle and tortoise aren’t separated. In fact, all tortoises are turtles, but all turtles aren’t tortoises.

The turtle is actually a general name given to all species and genus that falls under the order Testudines.

And in the order of Testudines, there are five separate families within it. They are Chelydriae (Snapping and Big Head), Dermochelyidae (leatherbacks), Cheloniidae (Sea Turtles), Trionychiadae (Softshell), and Testudinidae (Tortoise).

So classifying as a scientific classification, tortoises are Testudinidae, whereas other turtles are from a different family.

And even below that, there are three more diverse classifications. So you now have an idea of how far up these two have been differentiated.

So this proves that people have been unknowingly replacing the lexical use of the words turtle and tortoise. (In this article, we will refer to all water-dwelling Testudines as turtles and land dwellers as tortoises.)

Furthermore, the topic of mating between these two isn’t possible as they have distinguished themselves in the evolution millions of years ago.

These two don’t fall under the same family, let alone species or genus. So next time someone boasts of having a hybrid of turtle and tortoise, it isn’t true.

Mating Behavior Between Turtles And Tortoises Are Different.

Let’s discuss the mating behaviors of these two different species. Both these testudines have different mating rituals which is another significant difference between them.

How Do Tortoises Mate?

During the mating season, the male tortoise will chase the female for several days. He does this to wear down the ever reluctant female tortoise.

This activity lasts for about 10 to 20 minutes with constant groaning from both sides. One can hear tortoises mating from miles away.

How Do Turtles (Aquatic Testudines) Mate?

Compared to tortoises, turtles aren’t aggressive when they are indulged in mating rituals. The male follows the female inside the water and sniffs her cloacal opening. Males do it because the smell of pheromones which they are attracted to, are released from the female’s cloaca.

The male turtle gets in front of the female turtle and flutters his front limbs on her face. He will then stroke her head gently. In return, she will give her consent by turning around and indicating to put his penis inside her cloaca. It is a marvelous sight to behold when they twist and twirl their tails, passing his semen insider her cloaca.

Both Turtles And Tortoises Have Different Courtship

The nature of the male tortoise’s courtship is a rough one. He will try to have his way without the consent of the female tortoise. He will scratch with claws and bite with his jaws to wear down the female. Eventually, she will give in.

However, in the case of turtles, males are courteous and are gentle during courtship. Unlike tortoises, males do not show any sudden movements which might startle female turtles.

The nature of females can also be taken as a significant difference between these two. The female tortoises are extremely reluctant to engage in mating activity. In contrast, female turtles will cooperate easily after the courtship displayed by the male.

Habitat Is Also The Reason Behind Them For Not Mating.

A simple explanation for them, not mating, is that the turtles require water to mate, whereas tortoises mate on land.

The courtship behavior that dictates turtles to be on the water, like flipping their frontal claws, is impossible to execute on land.

It is against the law to keep these animals in a confined area to interbreed. Such initiatives are morally unjustifiable too.

Keeping these two creatures together for mating will definitely cause illness in both. Both carry different bacteria, which each of them will not be able to immunize properly. If kept together, surely there will be severe complications.

Final Words On Can Turtles And Tortoise Mate

Even though these two animals are similar in appearance, the definitive answer for this query is no, turtles and tortoises cannot mate. Factors such as habitat, mating courtships, and rituals suggest that mating isn’t compatible between these animals despite being from the same order, i.e., Testudinal.