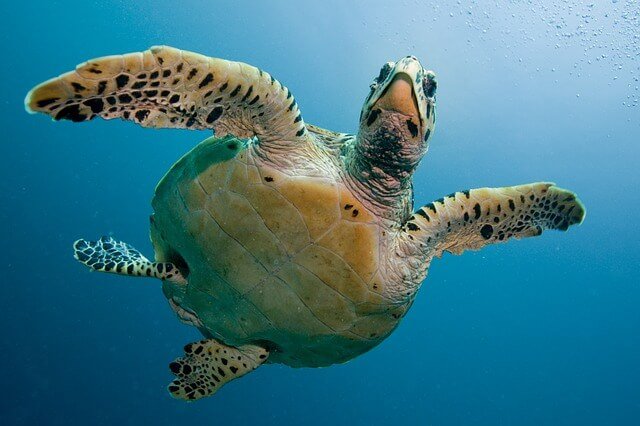 Turtles are one of the hardiest species to grace our planet. Turtles first appeared 230 million years ago, but according to fossil records, they’ve changed little ever since. So, how have they sustained their population for so long on Earth? They owe it to crazy survival tactics that we can only imagine.

And that brings us to our question of the day.

Under general circumstances, no, turtles cannot breathe underwater. They need to swim to the top to breathe air through their external nares. However, when hibernating, aquatic species like Painted turtles can breathe through their butt – a phenomenon known as cloacal respiration. And when the oxygen supply in the pond diminishes significantly, they resort to anaerobic breathing, which doesn’t require oxygen.

But what about sea turtles? These turtles spend their entire lifetime in blue waters. So, can they breathe underwater? Let’s find out.

No. Sea turtles cannot breathe underwater either. They, too, have to come to the surface to inhale oxygen. However, sea turtles can hold their breath for significantly longer periods than aquatic and semi-aquatic turtles do. A resting sea turtle can hold its breath for around 4-7 hours.

However, this ability depends mainly on the level of activity. When foraging or traveling, these turtles have to come to the surface more frequently to gasp air.

When turtles hold their breath, their heartbeat slows down remarkably. For instance, 9 entire minutes can pass between two heartbeats!

But despite these impressive adaptations, a stressed or entangled turtle may suffocate and drown quickly as stress depletes oxygen faster. It can be as quick as just a few minutes.

I have come across several misconceptions about a turtle’s breathing abilities in real life and on the internet. Many times, this leads to fatal consequences. I’ll tell you everything about turtles and their underwater breathing skills, but first, let me clear the air about how they usually breathe.

How Do Turtles Breathe?

Turtles don’t have noses like us. They have external nares positioned right above their mouth. Once they inhale air through the nares, it passes through the glottis, trachea, bronchi before reaching the lungs.

Turtles cannot expand and contract their shells like we do with our ribs. However, they have specialized muscles inside the shell capable of expanding and contracting to transfer air in and out of the lungs.

Now that it’s clear, let’s see under what circumstances can turtles breathe underwater.

How Do Turtles Breathe Underwater During Hibernation?

Turtles have adapted to ‘breathe’ underwater because their metabolism is significantly affected by their body temperatures. It’s because they’re ectotherms that rely on the environment’s temperature for their own.

And in winter, when the mercury drops and their metabolism slows down, they’re forced to hibernate underwater and breathe through their butts. Let’s find out how.

The technical term is cloacal respiration. Under a frigid pond covered by layers of ice, aquatic turtles breathe through cloacas, which is another word for their butts. Cloaca diffuses oxygen in and carbon dioxide out, thanks to the high density of blood vessels.

A hibernating turtle’s respiratory needs are quite low. In most cases, cloacal respiration can suffice their minimal oxygen needs.

So, turtles owe this ability to breathe without lungs for a prolonged period without oxygen to their well-vascularized butts.

However, if the winter is particularly long and harsh, the oxygen’s availability underwater will eventually deplete. Can turtles breathe underwater in such circumstances?

How Do Turtles Breathe Without Oxygen?

When the pond becomes hypoxic, hibernating turtles switch to anaerobic breathing. Anaerobic literally means ‘without oxygen.’ In this kind of respiration, glucose breaks down without oxygen, and the chemical reaction transforms energy from glucose to cell.

However, this leads to painful accumulation of lactic acid instead of carbon dioxide and water. Initially, the turtle’s skeletons and shells will release carbonate buffers to neutralize the acidic buildup.

But too much reliance on this breathing technique can prove fatal on some occasions.

Naturally, some species are more adept than others at it. Snapping turtles and painted turtles can tolerate this stress much better than others. In the lab, both these species survived force submergence at cold water temperatures for up to 100 days!

Also, anaerobic respiration is why turtles emerge as one big ball of muscle cramp in spring. They’re desperate to get some sunlight, restart their metabolism, and excrete these acidic buildups.

And at this time, their lives are seriously compromised since they cannot defend themselves against predation and other hazards.

How Long Can Turtles Hold Their Breath?

The answer to this question varies with the turtle’s species, age, and habitat. However, the general consensus is that turtles can hold their breath underwater for around 20-30 minutes. But they prefer surfacing once every 4-5 minutes to gasp some air.

How Long Can Red-Eared Sliders Hold Their Breath?

It’s reported that Red-eared sliders can hold their breath underwater for 30-35 minutes, given they’re aquatic species. However, during hibernation, they can spend months underwater and rely on cloacal and anaerobic respiration.

How Long Can Box Turtles Hold Their Breath?

Box turtles are terrestrial species. They can hold their breath underwater for only around 15-20 minutes, although it can extend to 30 minutes for some. The American Animal Hospital Associate lists tanks and pools as drowning risks for Box turtles.

How Long Can Painted Turtles Hold Their Breath?

Painted turtles are pretty sophisticated in their evolutionary advancement when it comes to breathing. Apparently, they can stay underwater for around 40-45 minutes. But as I mentioned earlier, their respiration game is quite good compared to others during hibernation.

How Long Can Sea Turtles Hold Their Breath?

During routine activity, sea turtles can hold their breath for around 45 minutes. But that doesn’t mean they always test their limits. Sea turtles come to the surface for oxygen once every 4-5 minutes. When asleep, they can go up to stretches of 4-7 hours without surfacing to breathe.

Loggerhead sea turtles take the first prize for their breath-holding ability. They hold the record for the longest ever documented dive, remaining under deep water for more than 10 hours!

If stuck in nets or anything else and unable to free itself, any turtle will get anxious, deplete all the oxygen present in its body, and drown in a matter of a few minutes.

Conclusion On Can Turtles Breathe Underwater

As you read above, the answer to this question can be both yes and no.

Under general circumstances, no, turtles can’t breathe underwater. They come to the surface and breathe in through the nostrils, and the air eventually reaches their lungs.

However, when hibernating, turtles can stay under frozen water for several months, thanks to their ability to breathe through the butt and anaerobic respiration!

Turtle and Fish Together? These 3 Species Can Be Your Best Bets!