Can Turtles Die From Being Upside Down? 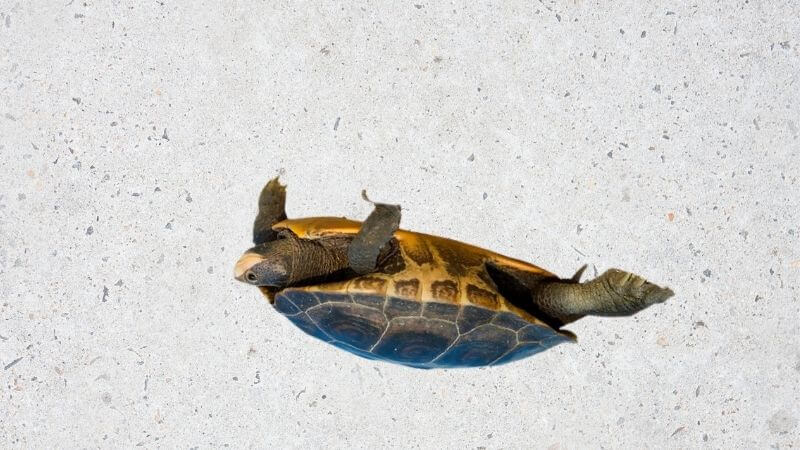 Turtles aren’t the most flexible or sporty animals on this planet. Unfortunately, sometimes, their clumsiness leads them to the strangest of situations.

One such common situation is when the turtle is upside down. Perhaps it was during the great escape from the tank when your turtle slipped out of balance and found itself in such a state.

But the real question is, can turtles die from being upside down if there’s nobody to help them roll back?

Can Turtles Die From Being Upside Down?

In general circumstances, turtles can easily get back on their own when they accidentally get upside down. However, if there’s no help around and they are stuck upside down in crevasses, they could die.

An upside-down turtle stuck in an uncomfortable position will have no access to food or water. Furthermore, the situation gets even more serious if the turtle is outdoors because it will be vulnerable to predators.

Can Turtles Eat Pumpkin? What About Seeds, Leaves, And Stems?

How Long Can A Snapping Turtle Hold Its Breath?

How Can Turtles Die From Being Upside Down?

Factors like being preyed on, drowning, starvation, dehydration, overheating of the shell, and rupturing of internal organs can cause an upside-down turtle to give up on life.

Predators Eat Turtles That Are In Distress

A stuck turtle is an easy meal for predators. So, when the misfortune strikes, the turtle will be frantic and lose its energy even faster. Less energy means less will to fight off predators.

Even more, it is easier for killers to access a turtle’s internal organs when it is upside down.

Even the smallest of creatures will pounce on such a chance.

Lack Of Food And Water

A lodged turtle will have no first dibs on food and water. After several hours of frantic trying, the turtle will begin to lose water present in its body fast. Simultaneously, its body will require food to replenish the energy.

And with no reach to basic amenities, the turtle will either starve to death or die of thirst.

When a turtle is upside down, its plastron gets heated by sunlight, causing dehydration. Unable to flip to the right side, the turtle will not survive long.

Rupturing Of Internal Organs Due To Pressure

An upside-down turtle’s internal organs will put pressure on its lungs. Often, you will notice signs like panting followed by wheezing sounds.

This discomfort can damage the turtle’s lungs, resulting in its death.

Insects Can Attack And Devour Your Turtle

When a turtle gets stuck outdoors, it will be in even more grave danger if there’s a presence of insect colonies nearby.

Pests and insects will swarm on its body and begin nipping. They will inflict injuries and accelerate shell rot.

Especially if the turtle is detected by the fire ants, it is almost game over for the reptile.

Did you know that fire ants have been known to bring down bigger animals like raccoons, jackals, and even bears?

Should You Help An Upside Down Turtle?

Yes, you can help an upside-down turtle by flipping it over gently. However, the turtle will already be stressed, and rough handling can add even more strain.

Do not apply too much pressure to position the turtle the right way. This can inflict harm on its internal organs.

Why Do Turtles Get Upside Down?

If this isn’t the first or the tenth time your turtle has toppled on its back, you should look for underlying reasons. For example, turtles get upside down when they have a respiratory illness when being chased by predators or due to accidents while venturing into unknown territory.

Turtles With Respiratory Illness Get Upside Down.

Take your turtle to the vet immediately if you notice further signs like red and puffy eyes, wheezing sounds, swollen necks, and open-mouthed breathing.

Turtles Get Upside Down When Chased And Attacked By Predators.

It is natural for a turtle to retract back to its shell when there’s danger. So, when a predator attacks, the turtle hides inside the shell.

This is one of the reasons behind turtles flipped upside down in the wild.

Turtles Slip And Turn Upside Down When Venturing Into An Unknown Territory.

Often, when turtles explore unchartered territories, they tend to overdo themselves and lose their balance, resulting in an upside-down position. This could be one of the reasons why turtles are found flipped on their back.

If you want to know more about why turtles flip upside down, check out this article:

Can Upside Down Turtles Turn Themselves Right On Their Own?

Yes, of course, turtles can turn themselves right side up on their own. They will use their legs and head to push against the ground and roll right back into the correct position on land.

The turtle won’t have any problem doing it in water because the water will itself adjust the turtle’s position.

The explanation mentioned above, however, applies only to healthy turtles. Turtles suffering from respiratory infections, or other deformities like amputated limbs, might need help to get back into the proper position.

Final Words On Can Turtles Die From Being Upside Down

When turned upside down, turtles should be able to right themselves. You shouldn’t panic. Instead, let your turtle make a move towards repositioning itself. Treat such incidents as a way to check whether your turtles are healthy or not.

A healthy and well-fed turtle should be able to turn the right side up itself. Only help the turtle if it is stuck in a tight place.

Your turtle can be in a dangerous situation if it has lodged itself in a narrow space where it has no room to turn itself back up. Being upside down for a long duration can definitely result in a turtle’s death.

Do Raccoons Eat Turtles? 6 Ways To Protect Your Turtles