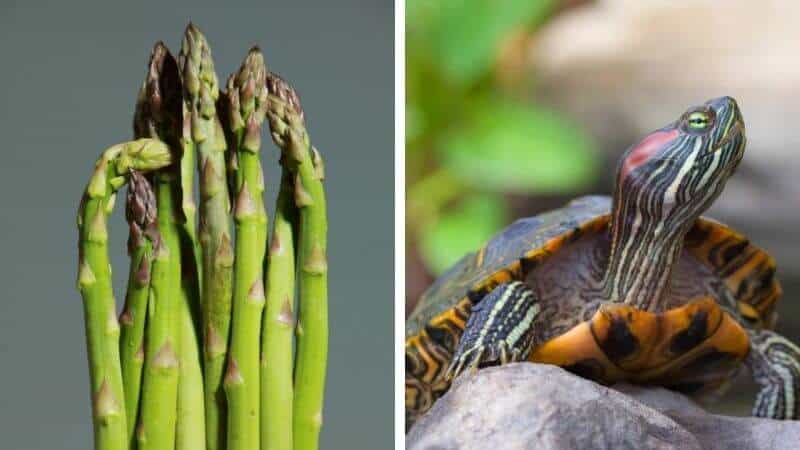 Low in calories and packed with nutrients, asparagus is the holy grail vegetable for health junkies. Do you know Oceana County in Michigan is the self-proclaimed asparagus capital of the world? It’s a cult favorite among health-conscious peeps, but does it impart the same advantages to our reptilian friends? Can turtles eat asparagus?

For a good number of years, I regularly fed asparagus to my turtles because I thought it was super healthy. That was before internet research became mainstream.

But now, not so much. Turns out it’s not as nutritious for turtles as I initially thought.

Keep reading! I’ve penned down everything you need to know on this topic.

Yes, turtles can eat asparagus in limited amounts every once in a while. This vegetable does contain some essential nutrients turtles need like vitamin C, vitamin A, and calcium. But at the same time, it has the wrong calcium: phosphorus ratio and contains goitrogenic compounds that hinder thyroid functions.

Often, we make the mistake of thinking what’s good for us is good for our turtles – especially when it comes to nourishing vegetables like asparagus.

But it’s important to remember that their digestive system is built completely differently than ours. Also, their nutritive requirements are pretty unique.

So, it’s always best to google the food in question before introducing it to your pet.

Some other veggies with goitrogenic compounds are broccoli, cabbage, kale, bok choy, collard greens, and cauliflowers.

Don’t panic yet! All of these vegetables are safe and healthy for your pet turtle as long as you give them in moderation!

Absolutely no. Turtles should never eat asparagus berries. They contain toxic compounds that can cause allergic reactions even in humans. And given a turtle’s body weight, you can only imagine the damage.

Studies show that it can even cause vomiting and stomach ache.

If you buy asparagus, you will probably only get bundles of green spears. That’s how we imagine asparagus to be, right?

But if you grow your own asparagus, you can notice the plant also bears some bright red berries. It’s almost tempting to consume them and give them to your turtle – but by all means, don’t.

Note: I didn’t find a single study on the web that studies asparagus berries’ effects on turtles. But since their harmful effects are well documented in humans, cats, and dogs, I am assuming they’d be pretty bad for turtles as well.

No, turtles shouldn’t eat young asparagus shoots as well. They’re also known to harbor harmful compounds, although not as much as berries.

It’s reported that these chemicals are somewhat destroyed when cooked, but why skate on thin ice, right? I’d avoid eating them myself or feeding my turtles.

How Much Asparagus To Feed Your Turtle?

Since asparagus comes in a bunch of spears, it’s easier to gauge the portion. You can cut up one medium-sized stalk or give it whole.

Smaller turtles may only eat a few leaves from the bulb, while a bigger one can consume the entire thing.

You can give asparagus only once a month since overfeeding comes with some serious risks.

As you already know, turtles are opportunistic feeders. They even tend to beg like dogs asking for food. They’ll eat as much as you give them.

So, it’s entirely up to your self-restraining power.

How To Prepare Asparagus For Turtles?

I always boil asparagus thoroughly for my turtles. Since they don’t have teeth or produce saliva, boiled veggies are easier to swallow. Also, boiling helps reduce goitrogenic compounds. It’s a win-win situation.

I always make sure that my turtle doesn’t consume other goitrogenic veggies like cabbage and broccoli on days that I give asparagus.

With all the caveats I told you about asparagus, I’m sorry if it now sounds like a forbidden food.

As long as you channel moderation, asparagus can make perfect treats.

Nutrition In 100 Grams Of Asparagus

Is Asparagus Healthy For Turtles?

As you can see in the table, asparagus contains specific nutrients that turtles need. Vitamin A helps in preventing infections of the lungs and eyes, while vitamin C boosts immunity. Likewise, minerals like calcium and phosphorus ensure the proper development of shells and bones.

But there are also a few risks attached to them. Let’s look at all the pros and cons in detail so you’re equipped with the correct info to make the right decisions for your pet.

Vitamin A is an indispensable nutrient for turtles. And thankfully, asparagus has it in ample amounts. This nutrient helps in maintaining the eye and respiratory health that are most prone to infections. Likewise, it also helps in the development of healthy skin, mucous membrane, and ducts.

However, just because asparagus contains plenty of vitamin A, you shouldn’t give it all the time. After all, it contains several other compounds that perform as antinutrients in turtles.

More on that later, but here’s a link to a vitamin supplement by Nature Zone that I use for my turtles.

I drop a few drops into their food as suggested.

Since turtles live in the water most of the time, they’re often prone to infections. And to make the matter worse, constant contact with water makes the wounds worse.

And as you can see, asparagus has a good serving of Vitamin C, a great water-soluble antioxidant that helps to improve immunity and prevent most ailments.

Likewise, asparagus also contains vitamin K, a vital nutrient that helps with blood clotting and bone health. Bleeding from the mouth is one of the most common symptoms of vitamin K deficiency.

So, besides these 3 nutrients, asparagus also contains a handful of other minerals and folates that are good for turtles.

However, that doesn’t mean it doesn’t have any shortcomings. Let’s discuss the cons next.

3 Risks Of Overfeeding Asparagus To Turtles

In small, occasional amounts, asparagus makes delicious and healthy snacks for turtles. However, if you give too much of this vegetable, it can cause dehydration, hinder thyroid functions, and stunt development.

Asparagus is known to have diuretic effects, which can get rid of salt and sodium from the body. Thus, overfeeding asparagus can often lead to dehydration in turtles.

Here are some telltale signs of a dehydrated turtle:

Asparagus contains traces of goitrogens, a compound that’s known to disrupt the thyroid function in turtles. For instance, goitrogen hampers a turtle’s iodine uptake capacity. As a result, it triggers the over secretion of thyroid-stimulating hormone (TSH).

While boiling does help to kill the goitrogens by miles, you should know that even a small concentration of this compound can be harmful given a turtle’s weight.

For turtles, the ideal calcium: phosphorus ratio is 2:1. But as you can see from the table, it’s quite the opposite with asparagus. A 100 grams of asparagus contains 24 mg of calcium and 52 mg of phosphorus.

While phosphorus is essential for turtles, too much can disturb the calcium absorption process by creating insoluble compounds like calcium phosphates.

Of course, yes. Box turtles can eat asparagus once in a while in moderate amounts. However, I’d suggest not feeding other veggies containing goitrogenic compounds on days you give asparagus.

And if your box turtle doesn’t like the taste of it, don’t force it. There are plenty of other options available.

I hope you didn’t skip reading the entire length because there are quite a few things you need to know. Nonetheless, here’s a short recap.

Asparagus is edible, healthy snack for turtles if you give it within limits. It contains essential nutrients like vitamins A, C, K and minerals like calcium and phosphorus.

However, it’s also known to contain the wrong calcium: phosphorus ratio, goitrogenic compounds, and have diuretic effects. So, always make sure that you give this vegetable very sparsely.

How Long Does It Take For Painted Turtle Eggs To Hatch? An Interesting Phenomenon