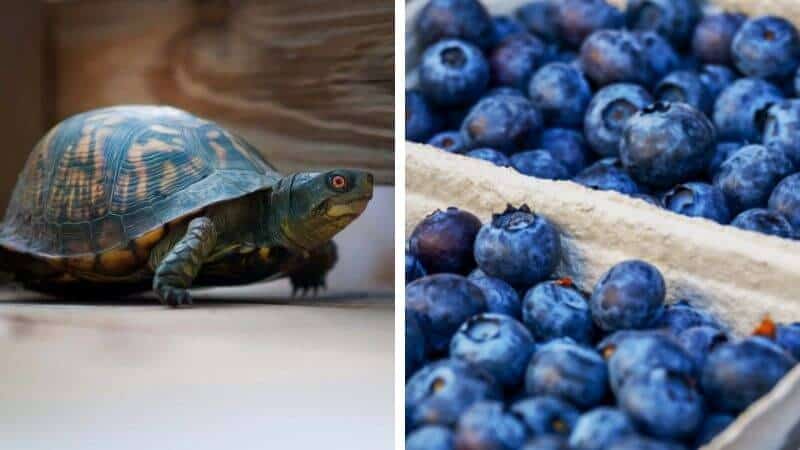 Blueberries are the world’s only naturally blue food – and they’re as tasty as they look. Healthwise? They’re the most nutrient-dense bunch in the berry family. But can turtles eat blueberries? As with all fruits, there are a few pros and cons of giving this fruit.

Read below and make your decision!

Yes, turtles can definitely eat blueberries if you give them every once in a while as a sweet reward or a treat. As healthy as blueberries are, they’re also super acidic and sugary. Your turtle’s body is definitely not built for a berry-rich diet and could experience kidney and digestive problems, alongside weight and development issues.

Okay, sorry if that sounded intimidating. I said yes and then went on about all the possible risks.

Actually, the thing is, it’s always better to be safe than sorry, right? Especially when it concerns health.

In the wild, turtles seldom enjoy sweet, tangy fruits – thus, their body isn’t used to digesting and metabolizing these foods.

If you want to give blueberries to your captive turtle, the key is moderation. I can’t stress this enough. Blueberries should never be a part of your pet’s staple diet. Few berries once or twice a month should more than suffice.

So, now since the answer to can turtles eat blueberries is pretty clear, let’s see if it’s the same drill for other parts of the fruit.

Yes, turtles can definitely eat blueberry skin as long as it is clean. But the fruit’s skin is usually prone to pesticide exposure. Thus, you must buy responsibly and clean appropriately before feeding your turtle.

Like most fruit seeds, they contain a small amount of cyanide. However, the seeds are also extremely tiny. Gulping down one or two seeds won’t cause trouble. But you can slit the berry in half and remove the seed before giving it to your pet.

In humans, the cyanic acid hinders blood hemoglobin from bonding with oxygen – leading to suffocation. In turtles, we don’t really know – there aren’t any studies yet that chronicle the effects.

Across many turtle forums, I came across owners who shared that they give the whole fruit without removing the seeds. And reportedly, they haven’t run into any problems.

But that doesn’t mean you can throw caution to the wind.

Absolutely! But don’t forget to thaw the berries gently before feeding your turtle. Blueberries can retain most of their nutritional content even in a chilled state. Plus, the cold will kill bacterias and pathogens in the fruit, if there were any.

So, it’s a great option to freeze the berries. But don’t give them ice-cold berries. To thaw, put the berries in water for a few seconds, and they’re good to go.

I’m sure you don’t intend to purposefully give blueberry plants and stems and actually are concerned about your turtle accidentally consuming them.

Ideally, no. Turtles shouldn’t have blueberry plants and stems. That’s because these parts are regular recipients of pesticides and fertilizers. Plus, they also contain tannins and some diuretic compounds.

I bet they don’t taste that great either.

As for accidental consumption, don’t worry. Blueberry leaves and stems don’t have a notorious reputation for being poisonous. If your pet accidentally consumed some, he should be able to digest that without any complication.

Either way, it’s best to monitor his behaviour for some time. If you find anything wonky, seek professional advice.

How To Prepare Blueberries For Turtles?

You can cut the blueberries into halves, remove the seed, and feed them. Remember not to indulge them much. Both skin and pulp are safe for your pets as long as you watch the portion.

My turtles usually go for the skin and spit out the pulp. Some shared that their turtles eat the pulp and discard the skin. Strange creatures!

But it’s always amusing to see them go fluttering after the berries in the water before they finally catch and eat them.

Bonus: Turtles love to play and poke fun with blueberries!

Okay, that was quite a lengthy ‘can turtles eat blueberries’ section for such tiny fruits.

Nonetheless, let’s move on to the possible health benefits and risks these berries pose. It’s not all fun and games.

I’m sure you’ll be able to make an informed decision once to gauge the benefits and possible side effects of feeding blueberries.

Natives of North America, blueberries pack so many nutrients for such teeny-tiny fruits. Primarily made of water and carbs, they contain a decent amount of fiber beneficial for turtles. They’re dense in vitamins, minerals, and antioxidants, known to boost bone health, blood pressure, and so much more.

100 grams of blueberries contains the following but not limited to:

The percent values are derived based on a 2000 calorie diet.

So, in addition to the ones mentioned above, blueberries also contain decent servings of other equally potent compounds like manganese, copper, vitamin B6, and so on.

But are these nutrients really important for turtles? Or will they backfire as antinutrients?

2 Health Benefits Of Blueberries For Turtles

Although blueberries don’t impart too many health benefits to turtles, they contain some nutrients turtles need. For instance, vitamin A helps to regulate eye and respiration functions, while vitamin C strengthens immunity.

Vitamin A is one of the two most important vitamins for turtles. It’s responsible for ensuring the sound health of the eyes and lungs. It also promotes the development of healthy skin and mucous membranes.

Suppose your turtle isn’t receiving enough vitamin A. In that case, it will hinder the regular functions of the skin and different organs – often inviting complications like Hypervitaminosis A.

Blueberries contain a generous serving of vitamin C. Several types of research, like this one, have shown that vitamin C can bolster a turtle’s immune system, keeping risks of possible infections and allergies at bay.

And since these water-loving reptiles are pretty susceptible to infections throughout their lives, food rich in antioxidants surely helps minimize the risks to an extent.

Do Blueberries Help Turtles With Shedding?

Turtles shed their skin and scutes as part of a healthy and natural growing process.

I came across owners who shared that they give blueberries to their pet turtles to make the shedding process easier.

Vitamin E indeed helps in shedding and soothing the flaky, dried skin. However, the traces of this nutrient in blueberries are relatively low. Plus, there is no concrete research supporting this claim. So, we cannot say with certainty that blueberries help turtles shed.

4 Things To Consider When Feeding Blueberries To Turtles

If you overindulge your turtles in blueberries, brace yourself for an array of complications. From insulin resistance due to high sugar intake to messed up digestive tracts, the caveats are many. Your turtle may also shy away from eating ‘relatively blander’ yet nutritious veggies.

Blueberries contain sugar in the form of glucose and fructose – and I must say, a generous serving of them. It obviously elevates the taste of the fruit, but your pet’s gut system isn’t well-suited to digest them. These compounds are known to cause cholesterol spikes and insulin resistance in turtles.

Another less harmful but equally concerning side effect of consuming too much sugar is an upset stomach.

It wouldn’t be wrong to say blueberries are one of the most pesticide-laden fruits available to us.

So, although it would be wrong to single our blueberries since all fruits and veggies contain pesticides more or less, it’s still wise to channel extra caution when feeding food that’s made it to the Dirty Dozen list.

A turtle’s body can retain pesticides and their harmful effects for several years.

But there’s a silver lining – the same study found that frozen blueberries were less contaminated.

Blueberries primarily contain citric, quinic, and malic acids. There are many other acids present in small quantities as well. If your pet turtle binges on blueberries, there’s a good chance that his gut won’t appreciate it.

In large amounts, the acids can completely change the digestive tract’s pH balance, wipe out colonies of good bacteria, and create a good entry point for toxins to enter the bloodstream.

In the worst-case scenario, this can lead to Toxic Shock Syndrome.

If you consistently give delicious snacks like blueberries to pet turtles, inevitably, they’ll develop a taste for it, and mind you, only it! Once they get used to the sweet and tangy taste of fruits, they may fiddle over veggies and greens.

As a result, this could cause malnutrition or obesity – eventually stunting your pet’s growth and development.

Well, don’t be overwhelmed by reading these potential risks. Complications arising from blueberries seldom happen. And these risks aren’t exclusive to blueberries – they apply to all kinds of fruit.

You don’t have to worry about any of the above risks as long as you feed blueberries sparingly. Don’t worry.

Here’s a list of berries safe and healthy for turtles when given occasionally as a treat:

Well, can turtles eat blueberries or not often also boils down to the species in question. Let’s see how some of our most popular turtles fare.

Yes, freshwater turtle species like Painted turtles can eat blueberries. However, in the wild, their diet comprises fish, critters, and aquatic plants.

Thus, if you want to introduce blueberries to their diet, do it sporadically. If they don’t like it, don’t force it.

Yes, Sliders too can eat blueberries. However, just like their aquatic cousins, blueberries should be given sparingly in small amounts.

But if they’re not too keen about it, don’t feed. It’s not exactly an indispensable part of their diet.

As long as your tortoise belongs to a fruit-eating species, you can give him blueberries within limits. If you give large amounts, your pet will have difficulty processing all that sugar and acid, irritating the kidney and digestive functions.

Conclusion On Can Turtles Eat Blueberries

Here’s a quick rundown of the bits you can’t miss out on.

Yes, turtles can definitely eat blueberries occasionally. I give mine a few once or twice a month, depending on the season. They contain some vital nutrients turtles need, like vitamin A, vitamin C, and calcium.

But as with all fruits, you have to be careful about the amount and frequency of giving.

A diet heavily inclined towards sugary, acidic fruits like berries can invite health complications in the kidney, gut, etc.