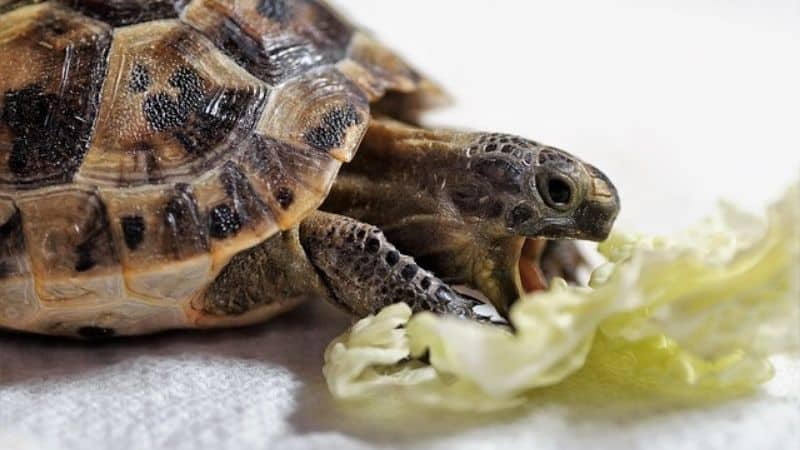 From a history dating back to 4,000 BC to becoming a staple food for weight loss, celery is an interesting vegetable, to say the least. But when it comes to turtles, how much benefit does it offer these omnivores?

Yes, turtles can eat celery as filler food occasionally. However, celery isn’t rich in nutrients turtles require. It is almost 95% just water and has high sodium content. Thus, it would be best if you only gave celery to your turtle once in a while as a light snack.

Celery is a marshland plant that has long fibrous stalks tapering into leaves. All parts of this green veggie are suitable for humans to consume, but what about turtles?

Yes. The leaves are the most nutrient-dense parts of the celery plant. Since the leaves don’t contain much water, they have a relatively higher concentration of calcium and minerals.

Cut the stalk leaves by trimming the top of each stalk off at the visible joint right below the foliage. Prepare them into small pieces for easy chewing.

However, make sure that you don’t cut it too finely. That way, all the little nutrients this plant has will transfer into the chopping board. Also, I wouldn’t suggest only serving leaves.

Yes, your turtle can definitely eat celery stems too. But the stems are mostly made of water and have little nutritional value. While stems can be great for dehydrated turtles, it’s best to serve them mixed with leaves.

For fine dice, rotate the celery stalk and cut it crosswise. The split section of the stalk should hold together as you dice it.

Turtles are opportunistic eaters. They will devour pretty much anything that you give them.

So, as an owner, it’s your responsibility to ascertain how much and when to give. If given in moderation, there’s no doubt that celery will do good for your pet.

Now that you know the answer to can turtles eat celery or not, let’s have a look at its nutritional value!

What’s The Nutritional Value Of Celery?

Since celery is around 95% water, it isn’t exceptionally high in vitamins and minerals. However, it contains a good amount of Vitamin K, essential for turtles. Celery also has traces of potassium, folate, fiber, and molybdenum, in addition to relatively small amounts of Vitamin A, B and C.

While Vitamin K isn’t the most crucial nutrient for turtles, its lack can cause bleeding from the mouth.

That being said, mouth-bleeding isn’t just exclusive to Vitamin K deficiency. But it won’t hurt to feed your turtle food rich in this nutrient from time to time.

Nutrition Value in 1 Cup (101 grams) of celery includes but not limited to:

Now let’s see what this table means for your pet turtle.

As evident from the tables above, celery’s nutrient content is nowhere near that of dark leafy greens. Nonetheless, they have a few valuable attributes and a few caveats to them.

Health Benefits Of Celery For Turtles

Although not very nutrient-dense, celery can offer some unique health benefits if fed in moderation. For instance, celery’s antioxidant and anti-inflammatory properties can prove healthy to keep potential infections under control. It also helps with digestion and hydration.

Celery Is Rich In Antioxidants

Celery is really rich in antioxidants like beta carotene and flavonoids. A single stalk contains up to 12 different antioxidant nutrients. Hence, it can prove beneficial in protecting a turtle’s cells, blood vessels, and organs from oxidative damage.

And since celery is also high in phytonutrients, it helps to lessen inflammation of the digestive tract and blood vessels.

As turtles are susceptible to chronic infections, celery’s anti-inflammatory properties can keep them in check to an extent. Celery and its seeds have around 25 anti-inflammatory compounds linked to fighting illnesses like arthritis and bowel disease.

While celery alone won’t guarantee the prevention of inflammatory diseases, it can make a sound, occasional supplement.

Several studies have shown that pectin-based polysaccharides in celery can minimize the occurrence of stomach ulcers in animals. Likewise, it also helps in improving the stomach lining and modulate secretions.

Additionally, the generous amount of soluble and insoluble fiber present in celery also supports maintaining a healthy digestive tract for a happy turtle.

As you already know, celery is 95% water. It can be an excellent food supplement to keep your pet turtle’s hydration level in check even more during the summer months.

If your pet turtle isn’t drinking water, you can try leafy, juicy alternatives like celery to meet their hydration needs. That being said, dehydration is a serious health problem in turtles, with symptoms like sunken eyes and puckered skin.

If you think your pet is dehydrated, you need to take him to the vet.

Side Effects Of Celery For Turtles

Celery also has a few potential caveats that can backfire if you feed too much. Since turtles tend to gobble everything, celery can cause choking hazards. It also has high amounts of sodium and pesticides detrimental to the turtle’s health and carries the possibility of making skin sensitive to UV lights.

Celery Can Cause Choking Hazard

Okay, this one isn’t celery’s fault at all. Let me explain how it can cause choking hazards.

Celery stalks are pretty big when uncut, and turtles eat voraciously. Do you see where I’m going?

If the celery isn’t cut into bite-size pieces fit for a turtle’s mouth, it can seriously cause a choking hazard. The fact that the stalks are hard and crunchy doesn’t help either.

A turtle’s natural instinct is to gobble up food since they don’t have teeth. So, if you are going to feed celery, ensure they’re cut into small pieces and comfortably enter a turtle’s mouth.

Celery Is High On Pesticides

Unfortunately, celery often tops the list of fruits and veggies with the highest concentration of pesticides. Most likely, the exposure to pesticides and herbicides will not kill your turtle outright. But it will significantly compromise their immune system.

As a result, your pet reptile will be more sensitive to diseases that can kill them.

This study conducted in Sequoia National Park showed that turtles exposed to pesticides showed signs of physiological impairment. Moreover, a turtle’s body can retain harmful chemicals for many decades.

So, if you plan to give your turtle celery, don’t ever stray away from organic options.

Celery contains chemicals called psoralens, which can make skin highly sensitive to UV light when applied directly. If, by any chance, your turtle gets the juice on itself when chewing and goes for basking shortly, it can end up with severe rashes.

In humans, the rashes usually appear within 12 to 26 hours after the contact and will go away in 3 to 5 days. To be honest, I don’t know if that’s the case with turtles too – but I apply great caution when giving them celery.

Every cup of celery contains around 80 milligrams of sodium. And while sea turtles have a higher tolerance to salinity, your captive reptile most likely doesn’t. Sodium can remain in a turtle’s system for an extended period and lead to eye and respiratory infections.

When consumed in moderation, salt is excellent at preventing fungus growth and reducing stress in turtles. So, if you’re feeding your turtle celery, don’t get carried away with proportion.

And that’s what brings us to our next section.

How Much Celery Should Turtles Eat?

The answer to “can turtles eat celery” is entirely dependent on the portion you’ll give.

Celery should only be given once or twice a month. You can start by adding 2-3 stems and a few leaves to a small cup of food.

Since celery is filler food, it doesn’t do much good for your turtle. But if you still want to experiment with it, mix celery with other veggies and greens.

Also, when eating, turtles don’t know when to stop. They can go on and on without thinking about the repercussions.

Hence, you must pay extra attention to the portion size.

Can I Give Steamed Celery To My Turtle?

Yes, you certainly can! According to a study, celery can retain most of its nutrients even when steamed, unlike some vegetables. The scientists found that 10 minutes of boiling allowed this veggie to keep 88 to 93% of its antioxidants.

However, boiling and blanching resulted in 38 to 41% antioxidant loss.

Boiling will soften celery, making it easier for your turtle to chew and digest. So, yes – it’s definitely a great option.

Lastly, celery loses a significant amount of antioxidants within five to seven days. Make sure that you are always buying fresh produce.

What Are The Better Alternatives To Celery For Turtles?

There are so many green, leafy options available with so much nutritional value to offer. Here’s a list of the most desirable vegetables for a pet turtle:

Conclusion On Can Turtles Eat Celery

So, can turtles eat celery?

The answer is, “yes, they can,” but there are a few things you need to know.

Celery is a filler food with low nutritional value. So, even if it’s okay to feed your pet turtle celery, it won’t impart many benefits. Honestly, there are a lot better options available.

Celery does have some health advantages, like helping with digestion and dehydration and having anti-inflammatory and antioxidant properties.

But it also has high sodium content, is usually full of pesticides, and can cause a choking hazard.

So, if you want to give your turtle celery, make sure you only give it once or twice a month, mixed with other veggies.